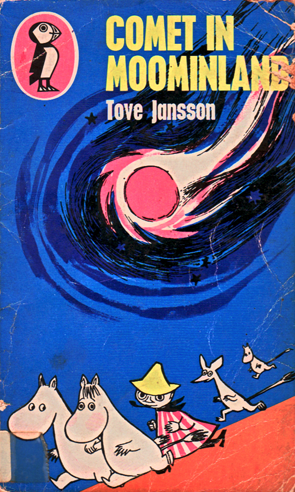 The left cover is a scan from my book I've had for over forty years. The cover on the right is from the 2018 reprint of the Moomin Series by Sort Of Books, a beautiful edition which showcases Jansson's artwork. 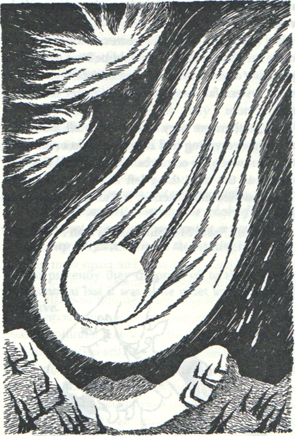 Comet in Moominland may be the second story Tove Jansson published about the Moomins, but it is generally counted as the first book in the Moomin series of eight novels. The first book published, The Moomins and the Great Flood, recounted how Moomintroll’s family come to live in Moomin Valley after he leaves the great forest with his mother in search of Moominpappa and a new home.

This second story and its characters, however, still look back to the time of the flood. Sniff, who is only identified as a little creature in the first book, is now given his name. Sniff remains nervous and something of a hypochondriac, although Jansson reveals that Sniff is not entirely timid. When a new path in the valley is discovered Sniff intrepidly adopts the mantle of ‘Path Pioneer’, and in another scene in which he endures an entire day floating down a river without incident, Sniff is bored enough to tell Moomintroll that he likes small adventures. Just the right size.

Jansson skilfully builds upon the world of her first novella. The world of the Moomins is a magical place filled with fantastical creatures and tree spirits; a world created for children. And this is also a world in which children have agency and independence. When Moomintroll decides to head to the Professors in the Observatory on the Lonely Mountains, he faces no obstacle from his parents. Moominmamma may try to load her son and Sniff with all the accoutrements of home for their adventure, but neither her nor Moominpappa blanche at their heading into the world on their own. The Moomin home, we find, is a safe and supporting place that empowers rather than questions. It’s easy to see the appeal for children.

The plot of Comet in Moominland is easily suggested by the title. There are signs about Moominvalley: curling marks on trees, seagulls that form a shape of a comet, ants that form a similar shape on the ground, and even crocodiles that arrange themselves in the shape of a comet tail. All these signs, along with the Muscrat’s sense of foreboding, are enough to hint that something is about to happen. Moomintroll and Sniff set out to visit the astronomers in the Lonely Mountains, where they are given a date and time for the comet’s arrival. They then flee back to Moominvalley along with the Snork and Snork Maiden, characters they meet along the way, to face their fate.

This book introduces new characters and adds details about the characters we already know. Moominpappa remains a somewhat mysterious character, since he only appears at the beginning and end of the story, but we learn that he is in the process of writing his memoirs, which anticipates the third book in the series of novels. Moomintroll, a typical young boy, initially eschews the thought of the Snork Maiden, but it is obvious he quickly becomes enamoured. This book also introduces Snufkin, a kind of tramp, who rejects the idea of possessions (although his hat and flag seem important to him), and reintroduces the Hemulen, although it becomes clearer that ‘Hemulen’ is a type rather than a particular character. The first Hemulen they meet accidently saves them with his butterfly net while the second is obsessed with his stamp collecting. Jansson’s Hemulen are finicky, small-minded men who wear skirts and care for nothing except their own obsessions. Their passion seems to be limited to classification. When the first Hemulen is told of the comet he cannot conceive of it as anything other than a moth or insect, and spends his time trying to categorise it.

In fact, Jansson has little respect for scientific detail here, which is fine. The scientist whom they consult about the comet is removed from humanity, alone with only other scientists to speak to in their mountain abode, and is rude when Moomintroll questions him about the Snork Maiden. He is focussed entirely on his knowledge and the precision of his prediction. The comet, itself, is giant fiery ball, rather than a ball of ice. It is like a star dislodged from the sky. It becomes so bright and hot in its approach that the sun pales in comparison and the water from the oceans dry out. There is a haunting scene in which Moomintroll and his group descend into the dry ocean basin on stilts in their effort to return home. Much of Jansson’s writing evokes the mysterious and a sense of awe, for Moomins are small creatures venturing into a wild and unexplored world. Her illustrations, which are full of the darkness of those unknown margins, are breath-taking in their simplicity and beauty.

This first novel in the Moomin series feels more realised than the first story. Jansson’s characters and the world are more fully rounded, and the story is enriched with detail and incident. These books will be special to children who become immersed in the characters and the mysterious corners of Jansson’s world. For adults, like myself, who return to after many years, there is a renewed sense of wonder to be gained. 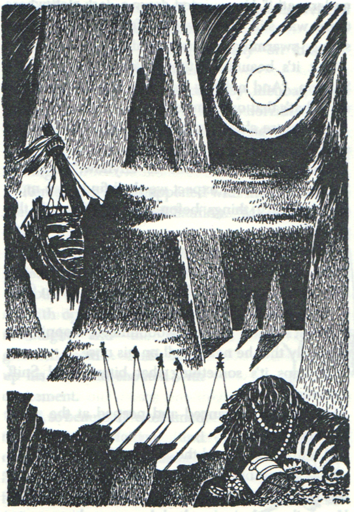 Jansson's illustrations evoke a sense of mystery and wonder as her characters explore a wide world that is sometimes hostile.