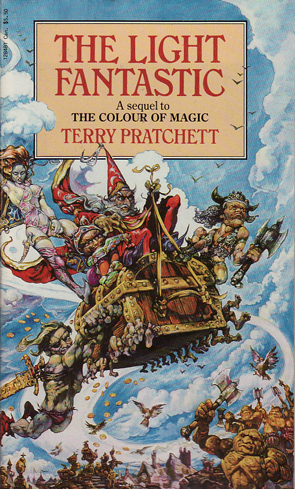 There was no real need for the torches. The Octavo filled the room with a dull, sullen light, which wasn't strictly light at all but the opposite of light; darkness isn't the opposite of light, it is simply its absence, and what was radiating from the book was the light that lies on the far side of darkness, the light fantastic.

The Light Fantastic is basically The Colour of Magic part two, as we pick up the storyline straight from the end of the last book. Rincewind and Twoflower are saved from the predicament they were in at the end of The Colour of Magic, then continue to fall from one life threatening danger to the next. This makes the first part of the book very episodic. The Octavo (the book containing the seven most powerful spells on the Disc) becomes a useful plot device for keeping Rincewind alive. It actually comes out and tells him that they, the spells in the Octavo, need him and that eighth spell which is lodged in Rincewind's brain. Gradually, the main story starts to unfold when a new red star appears in the sky and seems to be on a collision course with the Disc. All the separate storylines start heading towards dealing with the problem of the red star and the spells in the Octavo. And along with the red star, there is a power-hungry wizard out to take the power of the Octavo for himself, and a rabid mob of doomsday cultists who want to destroy all the wizards, whom they believe are the problem the red star is coming to destroy.

I think Pratchett was getting more confident with this second book, and was starting to develop the full humour which became a characteristic of his writing later in the series. This book may still not be as good as some of the later ones, but the improvement over The Colour of Magic is noticeable. The cameos made by Death in particular, are up there with best classic Pratchett scenes. Pratchett weaves together a lot of references to the Bible, classical mythology, fairy tales and pulp fiction in this book. There is still a lot of poking fun at the standard fantasy stereotypes that featured so heavily in The Colour of Magic, but overall, there is a much clearer structure to The Light Fantastic, especially in the second half of the book. Rather than just simply being a collection of jokes, this book becomes a quest, with a hero’s journey, even if our hero is reluctant to do anything heroic and would rather just run away and hide. But just as Rincewind eventually does the right thing at various points over the book to save his friends, albeit it reluctantly, he also faces the inevitable and does what is needed to save the Disc at the end of the book.

There still is plenty of humour in the book. Of course, Pratchett is always very funny, with plenty of snarky jokes and great one-liners, and even the occasional groaner of a pun (such as “Rincewind, all the shops have been smashed open. There was a whole bunch of people across the street helping themselves to musical instruments, can you believe that?" "Yeah," said Rincewind. "Luters, I expect.” ). Pratchett's Discworld series is one of the funniest series of books ever written, and The Light Fantastic, while still relying heavily on parody for its jokes, shows evidence of the development of Pratchett's style.

The Light Fantastic is also the book which introduces several great characters of the Discworld who will become semi-regular throughout the rest of the series, such as the Librarian and Cohen the Barbarian. In later books, it is just accepted that the Unseen University Librarian is an orangutan. This is the book that explains how he came to be an orangutan. He’s only a minor character and his characteristics aren’t really defined in this book, but we do get his ‘creation’ story. Cohen is more a major character in the book, renowned across the Disc as a great warrior, already a very old man but still capable of handling anything the world can throw at him. It seems with every battle he faces, that it will be his last, but Cohen always seems to triumph. And of course, Death appears. Death is, I think, the only character who appears in every Discworld story, even if he has only a brief appearance. He gets a few scenes in The Light Fantastic, but isn't a major character.

The Light Fantastic is a great read. It's really funny, it has some memorable characters, and it sets up the setting of Discworld ready for the rest of the series to shine. Recommended. 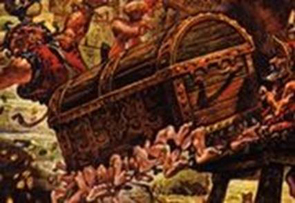 “The Luggage said nothing, but louder this time.” 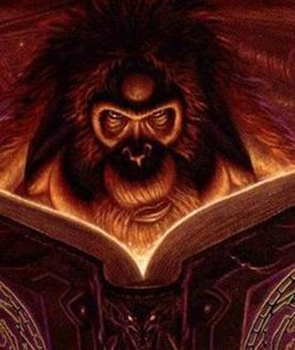 “The job of magical librarian, who has to spend his working days in this sort of highly-charged atmosphere, is a high-risk occupation. The Head Librarian was sitting on top of his desk, quietly peeling an orange, and was well aware of that.” 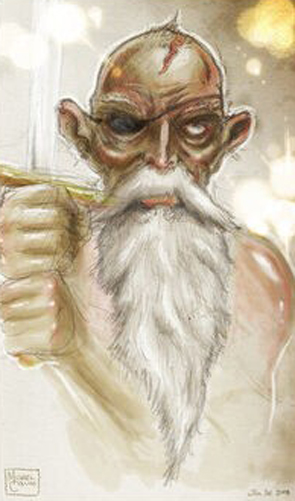 Cohen the Barbarian
The Discworld's greatest hero, Cohen the Barbarian, loosely based on Conan the Barbarian. In the Light Fantastic he is already old, maybe 90 years old. When his opponents see how old he is, they write him off, without stopping to think that you don't get to live as long as Cohen has in his profession without getting to be very good at it!

“I’m a lifetime in my own legend.”

DEATH
The Discworld's anthropomorphic personification of death, Death is a black-robed skeleton who carries a scythe to perform his duties.

“The other skeletal hand held small cubes of cheese and pineapple on a stick. “WELL?” said Death, in a voice with all the warmth and colour of an iceberg. He caught the wizards’ gaze, and glanced down at the stick. I WAS AT A PARTY, he added, a shade reproachfully.” 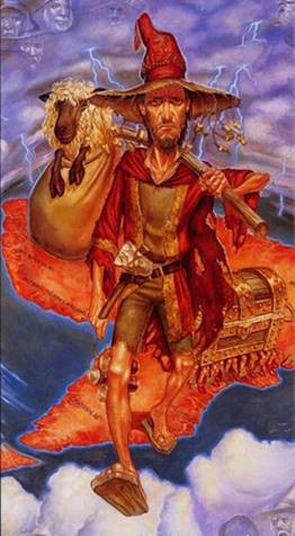 Rincewind
A wizard so inept that when he dies, the average magical ability of everyone else will rise slightly

“Rincewind had in any case seen his past life flash in front of his eyes so many times that he could sleep through the boring bits.”