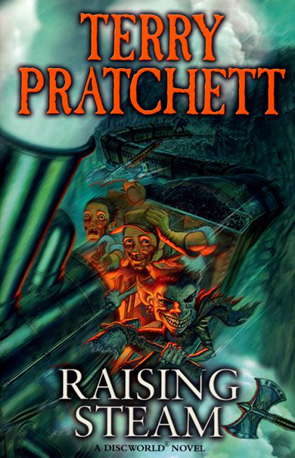 The Shepherd’s Crown may be Pratchett’s final Discworld novel, but Raising Steam is the last in the series I had left to read. It is also the last of the ‘adult’ Discworld novels – those not specifically written for younger readers like the Tiffany Aching books. I finished Raising Steam yesterday, having started reading Discworld in the mid-90s. It’s sat on my shelf as a promise that there was more Discworld I hadn’t read. The truth is, I love the Discworld series. When I started reading the series, Interesting Times (number 17) was the latest published. Masquerade was published as I reached the end of those first seventeen novels in quick time. Now, it’s done.

Pratchett can easily lay claim to being one of the funniest, wisest and most compassionate authors. His skill at characterisation, at awful puns, his staging of comic situations and his descriptive thumbnails that capture the essence of minor characters is immeasurable. His ability to draw upon the fantasy genre, science, mythology, English history and major world cultures and issues to create a light-hearted and ultimately positive universe, is genius.

For those who know nothing about Pratchett, it is sad to say he died in 2015 after a long struggle with Alzheimer’s. Pratchett’s last few books were produced despite the debilitating effects the disease had upon him. That he could produce a book like Raising Steam during this period, is amazing. The book is a testimony to his skill as a writer. But it is also a lesser book than Pratchett might have produced at the height of his powers.

Pratchett began the series in the early 80s with The Colour of Magic and The Light Fantastic, the two books featuring the hapless Wizard Rincewind and his offsider Twoflower. They were a satire on the fantasy genre, but the later books soon morphed into a more sophisticated and realised world. In the latter part of the series, the books have increasingly mirrored our own world. In the later Industrial novels – featuring the introduction of stamps, paper money, a printed newspaper, and the clacks (a semaphore system that is likened to our early telegraph) – the series has traced the development of Ankh-Morpork, the Disworld’s largest city, as it becomes an increasingly wealthy, tolerant and liberal society. This is despite its governance by a dictator, the Patrician, whom I always imagine to be based upon Machiavelli’s perfect prince, and these days played in my head by Game of Thrones actor, Charles Dance.

The introduction of steam technology in Raising Steam is the next logical progression in the development of the Discworld. Dick Simnel, a tinkering blacksmith, inherits his father’s hard-earned knowledge of steam technology, and like many geniuses, suddenly produces something no-one has ever seen; a fully-fledged steam train. He takes his idea to Harry King, Ankh-Morpork’s richest man. Harry King has made his money by handling the city’s sewerage. Now he is drawn to Simnel’s idea, knowing that this might make a more fitting legacy for his genteel ambitions. Meanwhile, the Patrician inserts himself into the whole enterprise, as he is wont to do, determined to ensure that he maintains some authority over this technology that will change the dynamics of trade and culture. He forces Moist von Lipwig, ‘hero’ of Making Money and Going Postal, into his service once again. Moist is responsible for getting the whole thing done, no matter how, as long as the Patrician doesn’t hear about it.

Meanwhile, a faction of conservative dwarfs known as grags, who do not wish the word to change, take to acts of vandalism. They burn clacks towers and eventually set their sights upon Simnel’s steam train, which the Patrician has decreed will travel all the way to Schmaltzberg, a kingdom predominantly ruled by dwarfs. There is an attempted coup in the kingdom. The Low King of the dwarfs, Rhys Rhysson, must be returned to the seat of his power as soon as possible. Simnel’s train is to be pressed into service for this purpose.

Raising Steam is different to any other Discworld novels because it has a map. Maps of the Discworld have been produced in the past by Pratchett’s collaborator, Stephen Briggs, who is also responsible for the stage versions of the stories. This may not seem significant, except that Pratchett has avoided the use of maps in his books while they are de rigueur in just about all other fantasy. I pulled out my Stephen Briggs version of the Discworld Map and found that Pratchett’s Raising Steam map conforms closely to that. Brigg’s map was produced around the same time I was finishing the first seventeen novels in the series all those years ago.

The significance of the map, for me, was that maps are often used on journeys. Fantasy writers like Tolkien employ maps because they are useful to show where the characters are going. For Raising Steam, I found the map significant because for the first time, it seemed, Pratchett had created a narrative based upon a journey. The narrative had succumbed to a linearity many of the other novels in the series avoid. Those who have read Discworld know that Pratchett does not use chapters (except in the books written for Younger Readers. Pyramids is also divided into four ‘Books’). Instead, Pratchett usually employs a series of interweaving narratives from which the story emerges. This is also his approach in Raising Steam, but the story seems to lack the depth and richness of other Discworld novels. There is a certain inevitability in Simnel’s production of his steam train and its popularity, then later the journey to Schmaltzberg. To be fair, I thought that some of the previous Industrial novels based upon the Discworld’s emerging society – particularly those involving Moist von Lipwig – suffered the same flatness. They are not the same genius of Wyrd Sisters or Sourcery. In Raising Steam the machinations of the dwarf Ardent against the Low King Rhysson are sideshows to the inevitable trudge of the narrative, yet they are the underlying driving force of the plot. The resolution of that story is subsequently sudden and unsatisfying. The plot moves with the inevitability of a train along its track.

Despite this, I am willing to forgive much in this book which was produced in ill-health, and is still quite entertaining, particularly if you’re a Discworld fan. How can you not love an author who creates a character called the Marquis des Aix en Pains, or has a talking golem horse powered by NagNav which obediently gambols and rolls in the fields to please its master, or still produces clever word plays and insights that make his books memorable? No one can use footnotes as entertainingly as Pratchett. Sadly, the book also feels like a goodbye, despite the Tiffiany Aching book that follows it. There are a host of old characters and places that get a mention (and curiously, those that don’t, like the witches). Rincewind turns up in two footnotes. Cori Celesti, the pinnacle mountain at the Hub of the Discworld gets mentioned twice. I don’t remember it being mentioned since the original two books. I might be wrong. There is a reference to The Fifth Elephant and much of the background for the tensions between dwarfs and trolls is taken from the Koom Valley story from Pratchett’s 34th book, Thud!. Lu-Tse (from one of the best Discworld novels, Small Gods, and Thief of Time) makes a brief appearance. Even Morris dancing gets a brief mention, again. And Death, of course, as always, manages to make it on stage. Occasionally, it feels like Pratchett is saying a last goodbye to his creation.

Despite its shortcomings, Raising Steam remains true to the philosophical underpinnings of the Discworld novels: that progress, tolerance and knowledge are for the greater good. When Pratchett inserts a steam train, the Iron Girder, into his world, it is more than the sum of its parts. The railway represents progress, yes. But it is also an instrument of opportunity that takes along other industries and professions with it. When the train chugs across the Discworld landscape, it is the catalyst for social change. The world becomes smaller and more tolerant. This is in contrast to the grags, the dwarf radical who wear thick leather clothes and conical hats and who cover their faces in the society of their friends. It’s an obvious swipe at Islam, although Pratchett hasn’t shied away at mocking religion, generally, in the past. But the grags just aren’t fundamentalists or terrorists. They also have their origins in the English history of the luddites. Even so, Pratchett’s handling of this issue isn’t as adept as his handling of other issues in previous novels. He becomes a tad didactic; a tad preachy. But it’s a worthy message. Pratchett’s target isn’t necessarily a group, but intolerance in general, and ideas that prevent progress and betterment. As such, Pratchett’s Industrial Discworld novels, of which Raising Steam is the last, along with the tenor set by the series as a whole, are a testament to Pratchett’s belief in Enlightenment principles and a belief in a world that can be bettered.

And the trouble with madness was that the mad didn’t know they were mad. The grags came down heavily on those who did not conform and seemed not to realize that this was like stamping potatoes into the mud to stop them growing.

Knut scrambled down off the hillside to where the air was warmer, leaving the goats, and ultimately traced the noise to a kind of big shed. And just as he got to it, the creature, carrying people inside it, broke out of the shed and hurtled away along the metal rails. He watched it until it had entirely disappeared. And later some of the townspeople told him it was what they called a ‘locomotive’, and in his heart the yearning started and began by degrees to grow. Yes, there truly were other things than goats.