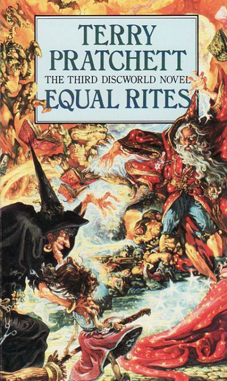 “Unseen University had never admitted women, muttering something about problems with the plumbing, but the real reason was an unspoken dread that if women were allowed to mess around with magic they would probably be embarrassingly good at it…”

This was the first Discworld book I ever read. A friend at university gave me a copy, saying he thought I’d enjoy it. As one of only a few females studying Physics, it was a story I connected with instantly. Many of Pratchett’s later books have better storylines and character development, but this one still holds an important spot in my heart.

There are a number of sub-series in the Discworld novels, such as the Rincewind/Unseen University series (which the first two Discworld books fit into), the Death series, the City Watch series and the Witches series. Equal Rites is the first of the Witches books and introduces us to Granny Weatherwax. Later books introduce additional witches, such as the wonderful Nanny Ogg, but this book focusses on Granny and her protégé Eskarina Smith (usually known as Esk). Just as Equal Rites is special to me, I've always enjoyed the Witches book more than the other series. I think that has a lot to do with Granny Weatherwax.

Esk is the eighth child, and first daughter, of an eighth son. In the Discworld, the eighth son of an eighth son is a wizard, so the Wizard Drum Billet, sensing his approaching death, passes his staff on to the newborn Esk without bothering to check that she is, in fact, a boy. Gender roles are very clearly defined on the Disc: only males can become wizards, while females become witches. And unlike the world of Harry Potter, ‘wizard’ and ‘witch’ aren't just gender names for the same role. They are vastly different in the magic they do and in their sphere of influence. Granny, the local witch, is disturbed by what has happened, but initially hopes they can hide the staff (attempting to destroy it proved too dangerous) from Esk and raise her as a normal girl. However, as Esk grows it becomes apparent to both Esk's father and Granny that the magic cannot be denied. So Granny takes Esk on as a trainee witch and hopes that will be enough for her. But the male magic continues to take hold of Esk, and Granny finally concedes that it can’t be contained. She takes Esk to Ankh-Morpork to seek entrance into the Unseen University, a place which considers the idea of a female wizard laughable. Once they leave their tiny village of Bad Ass, the story really gets moving. And of course, the jokes start flying.

This book shows Pratchett’s development as a writer. The Colour of Magic and The Light Fantastic were both very episodic, more a running collection of jokes with a fantasy background than a solid story. Equal Rites has a more traditional story structure, with a consistent plot running through it. The characters are better developed as well, and the competence of both Granny and Esk in magic is a nice contrast with the incompetent wizard Rincewind of the first two books. Granny, of course, will continue to develop into a much more complex character over the rest of the Witches series.

My main complaint with this book is that it wraps up too quickly. Apart from Esk's struggles to be taken seriously as a potential student at Unseen University, the main conflict only comes out late in the book, and is wrapped up way too quickly. I understand that this problem of the dangers caused by Simon’s new magic is secondary to the main plot of equality and the triumph of Esk over the misogyny of the wizards, but it seems to be solved way too quickly once Granny persuades the Archchancellor that Esk should be allowed to join the hallowed ranks of trainee wizards. And even that more important struggle of the acceptance of Esk as a wizard seemed to be solved too quickly. Perhaps this was a sign that Pratchett still wasn't confident with where he was going with the story, as he certainly doesn't shy away from properly developing a problem then solving it appropriately in later books.

Despite the better story in this book, Pratchett continued with his traditional humour and his clever wordplays. As always, there are way too many hilarious lines to ever pick a favourite, although the quote I’ve included in the sidebar about the boundaries of ignorance would have to be a top contender. Maybe that’s just because it has always captured how my fellow students and I felt every time we walked out of our advanced quantum lectures?

As always with the Discworld books, highly recommended. 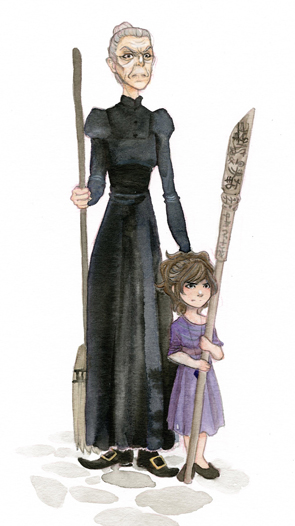 'I look at it like this,' he said. 'Before I heard him talk, I was like everyone else. You know what I mean? I was confused and uncertain about all the little details of life. But now,' he brightened up, ' while I'm still confused and uncertain, it's on a much higher plane, d'you see, and at least I know I'm bewildered about the really fundamental and important facts of the universe.

Treatle nodded. 'I hadn't looked at it like that,' he said, 'but you're absolutely right. He's really pushed back the boundaries of ignorance. There's so much about the universe we don't know.'

They both savoured the strange warm glow of being much more ignorant than ordinary people, who were only ignorant of ordinary things.

- Senior Wizards Cutangle and Treatle, after listening to Simon attempt to explain his new theories of magic, which sounded suspiciously like a lecture in theoretical physics - page 218