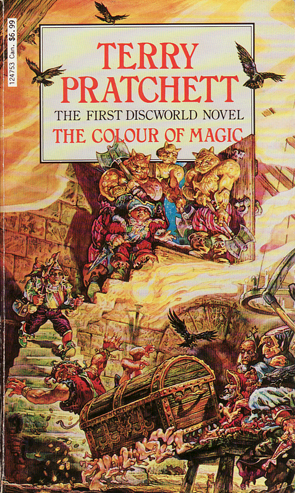 The Colour of Magic
Terry Pratchett

“If complete and utter chaos was lightning, then he'd be the sort to stand on a hilltop in a thunderstorm wearing wet copper armour and shouting 'All gods are bastards!”

This is not one of the best Discworld novels. It took Pratchett a few books to fully get into the flow of writing them and to develop his style. It is far more episodic than the later books, and it feels like the main characters stumble from one situation to the next, rather than appearing in a consistent narrative. But despite its flaws, The Colour of Magic is still very funny and a good introduction to the Discworld series. The book introduces some of the bizarre geographical details of the Disc (it’s a flat circular world supported on the backs of four giant elephants, each of whom stand on the back of Atuin, a giant space turtle (yes, Pratchett drew inspiration from Hindu mythology)), and some of the major characters, such as Rincewind, an incompetent Wizard, Death, an anthropomorphised incarnation drawn from the Western tradition who pursues Rincewind and SPEAKS IN CAPITAL LETTERS, and the Patrician, a kind of Machiavellian ruler of Ankh-Morpork. These three characters and the nature of the Disc are further expanded in later books, as Pratchett started to get a feel for what he wanted to do with this series.

The plot is fairly simple - Twoflower, the Disc's first tourist, arrives in Ankh-Morpork, eager to see all the sights and experience all the thrills he has read about many, many times. Although he regards himself as poor clerk, his 'luggage' (which possesses lots of little feet and a will of its own) is packed with gold. Twoflower is considered extremely wealthy by Ankh-Morpork standards, and therefore becomes the target of all the criminals in the city, which basically means he is the target of just about everybody, Ankh-Morpork not being known for its lawful citizenry. Twoflower befriends Rincewind, who has been thrown out of the Unseen University, and hires him as a guard. The two stumble around causing chaos for a few scenes: the book begins with Ankh-Morpork burning to the ground as they flee to 'safety' outside the city. After this, they continue to blunder from one adventure to the next, narrowly escaping each time by implausible means, seeing a lot of the Disc as they do.

Rincewind is completely inept and a coward whose main concern is saving his own skin. As a young student wizard, he opened one of the forbidden spell books in the library at the Unseen University. A powerful spell jumped out of the book and lodged itself inside his head, permanently scaring every other spell from him. Rincewind has no idea what spell he has inside him, but at desperate moments he is tempted to let it out, just to see what happens. He gets plenty of chances to do that as he flounders from one near-death experience to the next. And they are literally near-death experiences too – as a wizard, Rincewind has the right to be collected by Death himself, portrayed by Pratchett as a typical incarnation of the hooded skeleton carrying a scythe – and Rincewind gets to talk briefly to Death several times in the book, usually before fleeing.

Most of Rincewind's problems are caused by the eager but clueless Twoflower who is determined to see every sight he possibly can, and experience everything the world has to offer. He is the Discworld’s first tourist. Multiple near-death experiences fail to make any impression on him, except to occasion regret at something he has missed as a result of his close calls.

Along the way the text manages to satirise many of the standard tropes in the fantasy genre. There are the heroes who go around doing heroic things, a female warrior wearing only the skimpiest clothing imaginable, dragons, Cthulhu or some other character out of Lovecraft, and the Gods who play dice with the fates of the Discworld inhabitants. There are many vaguely familiar allusions throughout the book. Everyone will pick up different things according to their background in the genre.

While this isn't the best of the Discworld books, it is still an enjoyable read, and is loaded with great one-liners and witty observations about life, which are a hallmark of Pratchett’s writing. I think Pratchett's humour got better in the later books, but this still has some very funny moments and I'm glad I finally got around to reading it. 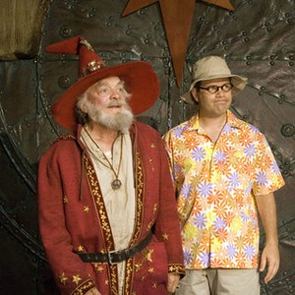