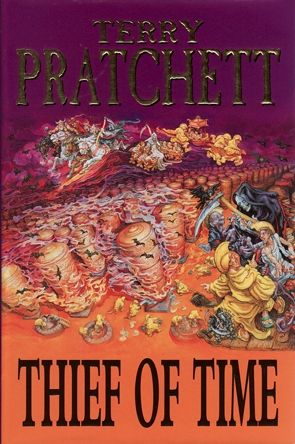 Time was something that largely happened to other people; he viewed it in the same way that people on the shore viewed the sea. It was big and it was out there, and sometimes it was an invigorating thing to dip a toe into, but you couldn't live in it all the time. Besides, it always made his skin wrinkle.

I've read a few of the Discworld stories, but mainly the early ones. As each of the stories tend to build on each other, I probably missed a few of the references in this one, but that wasn't important. The plot is easy to follow without having read any of the earlier ones, and even recurring characters are described well enough that you don't need to know their background to understand their role in this story, without necessarily repeating all that you might have learned about them in an earlier book. For example, Nanny Ogg features heavily in the "Witches Series", but you pick up enough about witches in her cameo appearance here to follow her role in the story. So, this could easily be read as a standalone book. But who would want to read a Discworld book as a standalone novel? Reading this one as my first in years has triggered in me a desire to go back to the beginning and read the entire series. A new project might be imminent.

The Discworld books are all set on the Discworld (duh!!). It is a large disc, complete with edge-of-the-world drop-off and encircled by a waterfall, resting on the back of four huge elephants (Berilia, Tubal, Great T'Phan and Jerakeen) which in turn stand on the back of an enormous turtle (named Great A'Tuin) that swims slowly through space. Although the Discworld has some characteristics similar to Earth, it is a fantasy world heavily influenced by magic, and which has it’s own version of physics to explain how things work. The geography, the magic and the physics of the Discworld form an important part of many of the stories.

The books can be grouped into several series, such as the Death series, the Witches series and the City Watch series. Thief of Time fits into the Death series. The anthropomorphic personification of Death is obviously the linking character in the series, although he has a smaller role in this book than in some of the earlier ones. He is joined by too important to let go of, and, importantly for the plot, Time. Time is basically the reason for the entire plot of this book, but is actually one of the most minor characters. Of more importance is her son.

The plot is rather complicated, but is basically a mishmash of every Kung-Fu movie ever made, blended with a Grimms’ fairytale, with an added dash of James Bond, to form a fiendish plot by the Auditors (some form of extra-dimensional beings who attempt to bring order to everything in the universe) to stop time completely, so they can have some time to catch up on their backlog of paperwork. The Auditors recruit a brilliant but slightly unhinged clockmaker, Jeremy, to build the most accurate clock ever made, and provide him with an Igor to assist with the work. They omit to tell him that his incredibly accurate clock will trap Time, herself, inside.

The History monks at the monastery of Oi Dong, whose job it is to see that tomorrow happens, learn of the plan and send out the legendary Lu-Tze and his promising apprentice Lobsang Ludd to try to save the day. Death also realises what is happening, but cannot intervene directly, partly because he has important matters to deal with in an apocalypse, and sends his grand-daughter Susan to try to stop the Auditors. Susan eventually joins forces with Lobsang, Lu-Tze and a rogue Auditor to battle against the Auditors, mostly by using chocolate as a deadly weapon. Death, meanwhile, tries to round up the old gang of War, Pestilence and Famine, none of whom are enthusiastic about riding out for Apocalypses anymore.

The Auditors are fantastic bad guys in this book, especially when they take on human form, and start to take on human characteristics and emotions. They try to stay in control, but it all starts to go very wrong just when they think they have achieved exactly what they wanted.

Overall, this is a great book, full of quirky characters. It's also full of many, many witty observations about the nature of time, and about humanity in general. It is loaded with so many funny little parts that I think you could read it several times and still find something you'd missed on all previous reads each time you open it up. It's impossible to pick a few favourite quotes from the book when practically every page has another great quote, and I would end up just copying out most of the book if I tried to pick the best ones. Recommended.

Two conversations in Thief of Time:

Just a minute, said Lobsang. Who are you? Time has stopped, the world is given over to ... fairy tales and monsters, and there's a schoolteacher walking around?

Best kind of person to have, said Susan. We don't like silliness. Anyway, I told you. I've inherited certain talents.

That's one of them.

It's a weird talent for a schoolteacher!

Master, what is the difference between a humanistic, monastic system of belief in which wisdom is sought by means of an apparently nonsensical system of questions and answers, and a lot of mystic gibberish made up on the spur of the moment?

Wen considered this for some time, and at last said: A fish!

And Clodpool went away, satisfied.