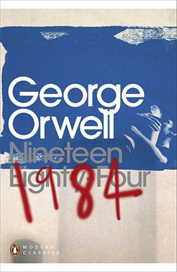 Over 60 years after being first published, George Orwell’s depiction of a dystopian future society still somehow manages to stay relevant through its powerful yet hopeless representation of the world we live in. It paints a brutal picture of the possibility of a fully totalitarian governed society, shown through the character of Winston, our protagonist. And the thing that is most effective about the book lies in his character arch. 1984 begins by following the standard Hero’s Journey arch, with Winston rebelling against the system through his forbidden love with Julia, however it then breaks the stereotype and, instead of seeing our hero come full circle and essentially defeating the antagonist of the story (In this case, the party and the philosophy it stands for), we see Winston tortured during the third part of the book, being forced to betray his own ideologies and taught to love the very thing he hates. This is completely terrifying, and this is what the book does incredibly well- Orwell has created such a helpless illustration of our future; he then presents hope within it; and then systematically tears apart this hope in the 3rd part of the book, making the reader watch as Winston is lobotomised of everything that had made him human.

However, even with this vivid and effective form of storytelling, 1984 is not a perfect book. And although its depiction of the near future is terrifyingly brilliant on Orwell’s part, the main criticism I, and many others I have discussed is the pacing; particularly toward the end of the second act, with the introduction of Goldstein’s book. Although it is extensively interesting and the lore behind the world Orwell has created is rich and detailed, the book becomes a chore to slog through as the pacing of this section is poorly handled. It sucks the reader completely out of the story and instead presents a substantial amount of exposition which, although well written and relevant to the story, is quite frankly too long, an issue that I feel could have been easily fixed if it had been broken up into smaller doses and fed to us slower with segments of the actual 1984 story put throughout to make it easier to swallow.

Other than this jarring narrative decision, 1984 succeeds in most aspects it attempts to tackle. Its bleak description of the future is aptly grim and depressing; the characters are believable and easy to empathise with, despite not being written in 1st person; and the overall plot is intriguing through the retrospective view of the issues during the Post World War II Stalinist Regime, and even more interestingly, through its parallels with modern society and the issues occurring in the world today. Orwell’s classic book has managed to stay relevant and topical throughout the decades while also remaining a well-crafted and easy, yet thought provoking read.