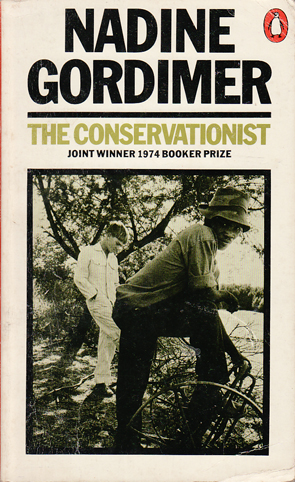 Mehring, a white South African, wealthy director of an investment fund and chairman for this and that, owns a farm. He bought it several years ago and it’s been a talking point at dinner parties as well as a place to spirit women away discreetly. Mehring’s wealth protects him from the financial vagaries of farming – of drought and fire and flood – while allowing him to escape the city on weekends to engage in his bit of rural dilettantism. If the hippos are aborting because their pools are too dry, the river itself is yet sustained by an underground source, and if he has to buy supplemental feed for the cows, he can write it off as a tax loss.

Nadine Gordimer’s The Conservationist captures an interesting historical moment. It is the world of Apartheid South Africa, written during the period of Apartheid and therefore not privy to the collapse of the system in the early nineties. In a predominantly black country, with black people as the traditional custodians of the land, South Africa was controlled by a white government that marginalised black people and segregated them as much as possible from white society. Mehring, who relies upon black workers for his farm, seems more ambivalent to the racial aspects of white South Africa. He understands that the government may compulsorily acquire some of his land to create a black settlement, but he is unperturbed. He’ll make a fortune.

Yet Mehring’s farm becomes essential to understanding his character. Apart from Mehring the industrialist, made wealthy by the pig-iron industry, there is Mehring the farmer. Mehring’s journey is a movement from the city to the farm; increasingly self-isolated from white society as his attitude to his little patch of earth comes to represent his struggles with his own sense of illegitimacy and his personal relationships. From financial investment and sex retreat, the farm is increasingly romanticised by Mehring; its natural rhythms and its daily functions.

It is from this association that the book takes its title. However, the title is somewhat misleading. Rather than the conservationism that was becoming more popular in the seventies when the book was published, and has come to be associated with the protection of rare animals and the natural environment, Mehring’s conservationism is far more parochial and pragmatic. True, he expresses concerns over the local children stealing and playing with the eggs of guinea fowl about the farm, and he is increasingly drawn to the natural cycles of nature – of drought and fire and regrowth – but Mehring’s conservationism is apolitical. Mehring is just as likely to be concerned with the conservation of the farm, itself; of fixing fences, clearing firebreaks and tending to the irrigation. The conservation movement in the seventies was about changing capitalism, as much as anything, in order to raise awareness about the use of the natural world. But political change necessitates social change. For Mehring, political change is fine, as long as it doesn’t affect him. In his growing attachment to the farm, Mehring is blind to the political realities that underpin his wealth and class: The politics are of no concern. The ideology doesn’t matter a damn [ …] The farm, to justify its existence and that of those who work on it, must be a going concern. These are the facts. Mehring trusts in development rather than nebulous ideals like justice. And while he may not enforce laws that require he sees papers from his black workers – it’s in his interests to turn a blind eye, after all – he has no sympathy for the plight of blacks. Instead, he adheres to a belief in a Darwinian world which both justifies his position, yet ironically also undermines it.

At the heart of Mehring’s struggle is the same struggle faced by white South Africa, itself: one of legitimacy. He has a sense that the world might change against him. Just as birds change their migratory habits due to the drought, drought and starvation may change the political landscape: Soon, in this generation or the next, it must be our turn to starve and suffer. What ties white society to the land is the same nebulous systems that Mehring has otherwise derided. As Antonia, a former lover and activist, anticipating the social change that Mehring fears, has told him, The blacks will tear up your bit of paper. The illusory legal hold white South Africans have is symbolised in Witbooi’s pathetic attempts to preserve work references given him by other white employers on bits of paper, soon to be destroyed by the coming rain: is as hollow as Mehring’s transactional attitudes to women, better to be paid for than engaged; is as insubstantial as Mehring’s full legal custody over Terry, his sixteen-year-old son. Angered by the Apartheid system and unwilling to do national service in the army, Terry refuses to return from America when he visits his mother there. Mehring has the legal system on his side, but what does that matter?

Central to the issue of legitimacy is the unknown black man buried in Mehring’s third pasture. Killed by assailants and dumped there, the South African police have little interest in the case when called out. Unable to deal with the body there and then, they bury the man with promises that they will come back, but they never do. The dead man haunts Mehring’s mind. Mehring is always aware of his presence: of the land, not owning it. Along with other characters and incidents in the book, black society is intimately tied to the land still. Mehring visits the farm on weekends. During the rest of the week Jacobus assumes responsibility for the farm. Phineas’s wife brings the workers together in a traditional ritual which will make her a witchdoctor. Solomon, also a victim of unknown assailants and dumped in the third paddock, has survived, transformed in the eyes of his people like a black Christ. And while the rituals of Phineas’s wife recall traditions associated with ancestor worship – the Amatongo or, literally, those who are beneath – Mehring adopts a Darwinian notion that negates the implications of the black man buried in his third pasture and the ruin of his farm by fire. For one thing, the regrowth of the farm after a fire is pleasing to Mehring, not just because he imagines himself attuned, now, to nature, but because it provides him with a reassuring narrative: all earth is a graveyard and regrowth is natural. Civilisation is built upon the bones of former generations. Much like the farm’s natural regeneration after the fire, Mehring reasons that there is a natural evolution from black society to white; a natural historical progression, as one culture and generation builds over the top of the previous, much like the regrowth on the farm, or the dead man under it. Ironically, the metaphor of regrowth might just as tidily apply to a happier future for black South Africans.

In this way legitimacy is tied to fecundity in the narrative. The Guinea fowl eggs Mehring frets over are echoed in other symbolism. Mehring finds a marble which once belonged to Terry in his car. Later, the marble will be found by a girl he meets – for real or as an illusion, it is hard to tell as Mehring’s state of mind declines – and in her hand it reminds him of the eggs stolen from the nest by the children, earlier: a clutch of pale, freckled eggs that will never hatch. The marble, like the eggs, is barren, just as Terry, his son, Mehring realises, will never produce heirs, since he is homosexual. In a generation, the farm he held for his son will be lost. Like the floodwaters that wash away the detritus of white society, there is an historical inevitability that plays heavily on Mehring’s mind.

Gordimer’s novel is a powerful symbolic and psychological tour de force. The narrative moves back and forth in time through Mehring’s own thoughts, between his relationships with his son and Antonia Mancebo, his lover and ideological antithesis, and current alienation from white society and his attempts to find a new legitimacy on his farm. The book is symbolically rich and employs stream of conscience techniques to dramatize the emotional and moral burdens that Mehring continues to carry over his sexual and professional life. As a political novel, it has been somewhat outdated by subsequent history, but it still has much to say about political repression, and as a character study it remains compelling. 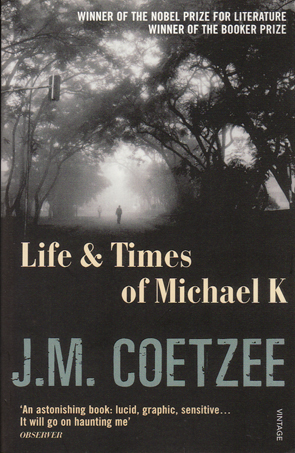 Nadine Gordimer
Nadine Gordimer was an activist against the Apartheid regime. She helped Nelson Mandela prepare his defence speech for his 1964 trial, now known as I am Prepared to die, which is widely considered one of the great speeches of the 20th century, and a landmark in black South Africa’s fight for equality.

She put her hand on him, just under the left pectoral muscle, half patted, half slapped, half caressed. – This is what I believe in – flesh-and-blood people, no gods up in the sky or anywhere on the ground. ‘Development’ – one great big wonderful all-purpose god of a machine, eh, Supperjuggernaut that’s going to make it all all right, put everything right if we just get the finance for it. The money and the know-how machine. Isn’t that it, with you? The politics are of no concern. The ideology doesn’t matter a damn. The poor devils don’t know what’s good for them, anyway. That’s how you justify what you condone – that’s what lets you off the hook, isn’t it – the Great Impartial. Development. No dirty hands or compromised minds. Neither dirty racist not kaffir-boetie. Neither dirty Commie not Capitalist pig. It’s all going to be decided by computer – look, no hands! Change is something programmed, not aspired to. No struggle between human beings. That’s be too smelly and too close. Let them eat cake, by all means – if production allows for it, and dividends are not affected…