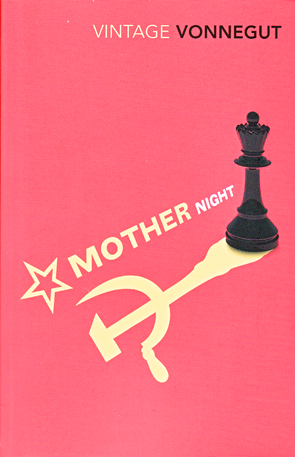 World War II and Nazi Germany’s Final Solution is the background to Kurt Vonnegut’s Mother Night. It’s protagonist, Howard W. Campbell Jr., sits in an Israeli prison in Jerusalem, arrested for war crimes against humanity, awaiting trial. He has been given an old German typewriter by Tuvia Friedmann, Director of the Haifa Institute for the Documentation of War Criminals, so that he might record his part in the war for the archives. And with that typewriter Campbell documents how as a young American boy he arrived in Berlin with his parents and eventually became a playwright in the German language before being approached by Major Frank Wirtenan to be a spy. Campbell recalls how he was asked to pretend to be a Nazi, how Goebbels himself commissioned a nationalistic play from Campbell and how Campbell also produced Nazi propaganda for radio which incorporated secret messages for the Allies.

That’s the background of the story. The story itself takes place fifteen years after the war. Campbell has led an anonymous life in New York City, but now his past is about to catch up with him. An article about him appears in an extreme right-wing publication, The White Christian Minuteman, published by Dr Lionel Jones. William O’Hare, the man who captured him in Germany before he was subsequently released (due to his ultra-secret role as a spy) is suddenly on his trail again, and it seems that his believed-to-be long-dead wife, Helga, may have also traced his whereabouts with the help of Jones and his unlikely cronies.

Mother Night at first appears less personal that some of Vonnegut’s other fiction. Slaughterhouse 5 was based around Vonnegut’s experiences during the bombing of Dresden, for instance, and Slapstick or Lonesome No More inserts members of his family prominently into the narrative. Vonnegut distances himself from the narrative in Mother Night with a new narrator and by positioning himself as the text’s ‘editor’, but Vonnegut’s interest in the war and the moral issues raised by those experiences are still evident in this novel.

This novel also eschews the Science Fiction elements that appear in many of his books (The Sirens of Titan, Slaughterhouse 5 or Timequake for instance), and has less of Vonnegut’s trademark humour. That’s not to say that Mother Night is not distinctly Vonnegut in voice or subject matter. It may not employ familiar refrains Vonnegut employs in other novels, or Kilgore Trout, his oft-used protagonist, but I think that shifts the tone of the book to a more tangibly serious and realistic treatment of the subject matter. This makes it a more respectful book, although, at times, Campbell’s increasingly ridiculous situation seems to call for a more humorous tone. But the subject matter, after all, concerns what lies at the heart of our morality. Hitler’s Final Solution raises the question of individual morality, since the well-known defence of following superior orders was roundly rejected by the Nuremberg trials (The fact that a person acted pursuant to order of his Government or of a superior does not relieve him from responsibility under international law, provided a moral choice was in fact possible to him. - Principles of International Law Recognized in the Charter of the Nüremberg Tribunal and in the Judgment of the Tribunal, 1950. Section IV) Vonnegut satirises the rejection of personal culpability in a scene recalled by Campbell in which he meets Adolf Eichmann in prison. Campbell asks him, Do you feel that you’re guilty of murdering six million Jews? When Eichmann denies responsibility Campbell mockingly rejoins, You were simply a soldier, were you … taking orders from higher-ups, like soldiers around the world? Eichmann turns to the guard and angrily demands to know whether the prison has shown his statement of defence to Campbell. Campbell denies having seen it. Then how do you know what my defence is going to be? Eichmann demands.

Vonnegut often breaks the fourth wall in his novels to speak to the reader, particularly to moralise upon the story. In this novel that is restricted to Campbell’s own reflections concerning his past, along with the metafictional opening, first with an introduction by Campbell, and then with an editor’s note from Vonnegut. The moral of the tale, Campbell tells us in the third line is We are what we pretend to be, so we must be careful about what we pretend to be. Vonnegut, as ‘editor’ of Campbell, quotes a discarded section concerning the book’s dedication to Mata Hari, the exotic dancer, courtesan and famous spy of World War I. Margaretha Geertruida MacLeod, who took the stage name Mata Hari, invented an exotic backstory for herself, became famous for her act in which she appeared almost nude, and was eventually tried and shot as a spy for the Germans. The case received a lot of press coverage, but it seems she actually gave little of anything valuable to the Germans. Mata Hari’s connection to Campbell is obvious – Campbell claims to have been a spy in Germany, although secretly on the side of the Allies. But the connection nevertheless raises the moral problem at the heart of the novel: does moral culpability exist when one does evil to achieve an ultimate good? This is what Campbell struggles with as he toys with the idea of dedicating the book, instead, to a person (namely himself), who is known to have done evil, while saying to himself, ‘A very good me, the real me, a me made in heaven, is hidden deep inside.’

It is telling, then, that the opening chapters of the novel are about people or ideas compromised by evil or ignorance. Each of Campbell’s four guards – Arnold Marx, Andor Gutman, Arpad Kovacs and Bernard Mengel are in some way compromised. Marx, a young Jew, helps on an archaeological dig in the ruins of Hazor. He has intimate knowledge of the Assyrian, Tiglath-Pileser who burned the ancient city down, but has never heard of Joseph Goebbels. Gutman survived Auschwitz by volunteering for the Sonderkommandos, the group who ushered Jews and others into the gas chambers for the Germans and then later removed their dead bodies. Kovacs joined the Nazis with false papers, contemptible of ‘briquets’ – those who did nothing to save their own lives – and managed to leak information to the allies. His actions are in no way different to Campbell’s, but he now guards Campbell in prison. And finally, Mengel, who claims to have taken part in the hanging of the commandant of Auschwitz, Rudolph Franz Hoess, after his trial. Far from attaining a sense of moral justice, Mengel is left with a neutral feeling of nothingness, equating Hoess’s hanging with securing his broken suitcase with the same strap he used to pull down on Hoess’s hanged body. And it seems that it is not just individuals but even ideas that are corruptible. Campbell takes the title for his play commissioned by Goebbels - Last Full Measure from Lincoln’s Gettysburg address. Hitler is sent a copy of Lincoln’s speech. Some parts of this … almost made me weep Hitler comments in a note attached to the speech. All northern peoples are one in their deep feelings for soldiers. It is perhaps our greatest bond.

Apart from the story of what happens when Campbell’s anonymity is destroyed by Jones’s article, Mother Night is about this corruption of ideas and ideals. The very title, Mother Night, is somewhat ironic, since it is a reference to Goethe’s Faust, from a speech by Mephistopheles. It is quoted by Vonnegut, quoting Campbell who is quoting Goethe in the Editor’s Note. Mother Night is that state before God sends light into the universe at the moment of creation: an absolute darkness that therefore represents absolute evil. No-one in the novel possesses that level of evil. The greatest denunciation of any individual in fact is made against O’Hare, the Nazi hunter who pursues Campbell. While his actions are dressed in nationalistic morality – O’Hare sees himself as St George to Campbell’s dragon – Campbell deconstructs his mission as that of a man whose life has become pathetic and without purpose, whose absolutist ideas have corrupted his soul rather than enlivened it:

O’Hare is a minor character in the book – in fact he really only has one major scene – but the problem of his hatred occupies Campbell’s mind. What brings people to hate without reservation and to perform abominable acts? O’Hare is driven by a strongly-desired sense of destiny. A police officer Campbell talks to believes in science, on the other hand, and explains it as a problem of biological determinism: that we are governed by chemicals in our body, that even whole nations, by the food they eat and the water they drink, might have their characters changed. For Campbell, it is the metaphor of gears and machinery that is most apt: that the totalitarian mind is one in which some of the teeth in the gears of their thought machine have been deliberately filed off, allowing the mechanism to slip sometimes, while at other times to work perfectly.

It was this last thought, I think, that makes the novel relevant still, in an age of Internet echo chambers and sub-groups that maintain untenable positions against all evidence to the contrary, like anti-vaxxers or those who genuinely believe in flat Earth. It’s what you’re willing to deny in order to maintain a position that determines what you’re also willing to do. Campbell may have worked for the Nazis for a good reason, but he knows that he is also responsible for a lot of harm his role as a propagandist has played in the war, and that simply believing he is good is not enough. He knew his role was wrong: God help me, I carried out their instructions anyway.

Mother Night represents that aspect of Vonnegut’s work which is highly moralistic, but is less imaginative that some of his other work. It sets an interesting moral paradox for its protagonist and is entertaining, although the novel’s denouement is a little rushed and a little heavy in its use of deus ex machina. While the central ideas of the novel are sound and the narrative has that familiar Vonnegut tone, its subject matter might have been leavened with more humorous episodes. Apart from this, it’s still highly recommended, especially for those interested in Holocaust history as well as for fans of Vonnegut. 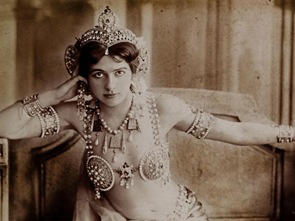 Mother Night is dedicated to the exotic dancer turned spy, Mata Hari. Mata Hari was originally approached by the French to seduce the German Crown Prince in order to find out state secrets. She later offered to sell French intelligence to the Germans. She was tried for espionage by the French and faced death by firing squad in 1917.

‘Did you know,’ he said, ‘that until almost this very moment nothing would have delighted me more than to prove you were a spy, to see you shot?’

‘And do you know why I don’t care now if you were a spy or not?’ he said. ‘You could tell me now that you were a spy, and we would go on talking calmly, just as we’re talking now. I would let you wander off to wherever spies go when a war is over. You know why?’ he said.

‘Because you could never have served the enemy as well as you served us,’ he said. ‘I realized that almost all the ideas that I hold now, that make me unashamed of anything I may have felt or done as a Nazi, came not from Hitler, not from Goebbels, not from Himmler – but from you.’ He took my hand. ‘You alone kept me from concluding that Germany had gone insane.’