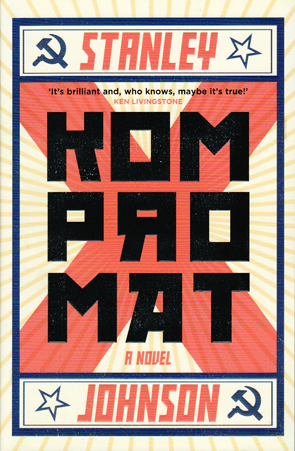 The subject of Donald Trump’s presidency and Brexit are just too irresistible for fiction writers, it seems. I’ve recently read Ali Smith’s Winter, set in the contemporary history of Britain before it makes its final break with Europe and Joyce Carol Oates’s A Book of American Martyrs which reflects upon the potential impacts of a conservative pushback against abortion laws. Salmon Rushdie’s The Golden House is also set in a post-Obama America which reflects some of American social issues. Now, Stanley Johnson also delves into the fictional potential of contemporary history in his novel Kompяomat.

However, Kompяomat is something different from these other novels. Historical Fiction, if that is what I might call these novels for the moment, often sets ordinary fictional characters within an historical and social milieu, or if dealing with real historical personages, it fills out the historical record with a fictionalised account that conforms to an interpretation of their history. Kompяomat might be more accurately called satire, since its intention is to provide a critical interpretation of Russia’s meddling in the 2016 American presidential campaign and Brexit. But it’s not quite that, either. One of the weapons of a satirist is exaggeration, and the story of Trump, Brexit and Russia’s involvement hardly bears exaggeration. Instead, Kompяomat seems to offer a fictionalised account of what might actually be true, from a certain perspective, or at least what might be believed in an era of fake news and Russian troll farms. Kompяomat is a term that has only recently gained currency in the English-speaking world as rumours claiming that Donald Trump is compromised by material – ‘Kompяomat’, from the Russian – acquired after former trips to Russia as a businessman, persist.

One of the most colourful of these rumours is the sex tape in which Trump is alleged to be filmed receiving a golden shower from prostitutes in a Russian hotel. Of course, the problem for Trump, with his grab them by the pussy remark and his associations with the adult film actress Stormy Daniels, is that known stories about him are so salacious that it is easy to imagine it is true, even if it is not. This is the kind of truth that informs Kompяomat. Naturally, Stanley Johnson changes the names and some circumstances enough that he doesn’t get sued. So instead of Presidential Candidate Donald Trump, we have Presidential Candidate Ronald. C. Craig. Instead of Putin we have Russian Federation President Igor Popov. Instead of English Home Secretary (and later Prime Minister) Theresa May, we have Mabel Killick. Hillary Clinton is represented by Democratic Presidential Candidate Caroline Mann. Mann’s emails are still controversial, the head of the FBI, Wilbur Brown (not James Comey of course!) still unbalances the election two weeks out from polling day by reopening the investigation into those emails, but this is all fiction, isn’t it?

Johnson is a little more circumspect with Ronald Craig (Trump). He muddies the waters on the sex video. British Secretary of State, Edward Barnard, is initially implicated as the stud receiving the shower in the video, due to some dodgy editing and pixilation. Craig is later implicated. The provenance of the video is complicated and Johnson does not take a killer aim at his target in the way that someone who is staunchly anti-Trump might have hoped from this fictional account. But to some extent, Craig is a hapless figure and Popov an arch-Machiavellian, all the same. The book opens with a field trip led by Popov into the Russian jungle to see the rare Siberian Amur Tiger. Accompanying him is his Ronald Craig, his daughter Rosie and her new love interest, the internationally renowned actor, Jack Varese. The trip is the culmination of a three-day World Tiger Summit which Popov has led assiduously, much against his image of a masculine hunter. He cares for these animals which symbolise his country’s natural heritage, and provide a point of opposition against the Chinese who have hunted them in the past when they cross the border. The expedition becomes of key importance when it appears that Popov, instead of tranquilising a tiger in order to have it tagged, appears to deliberately shoot Craig in the backside. Has Russia used the incident to implant a bug in Craig’s bottom when treating him? When informed of this possibility the attorney general asks, “You mean he’s literally talking through his ass?” The notion seems farfetched – ridiculous even – until one remembers the brief furore created only a couple of weeks ago when Trump met Putin in Helsinki and Trump received a soccer ball as a gift from Putin in front of cameras. The speculation that the ball might be bugged was inflamed when it was discovered that the manufacturer, Adidas, did indeed embed a chip under the surface of the ball that could communicate with phones. Of course, Johnson’s narrative seems prescient when things like this happen.

Johnson’s novel isn’t only about Russia and Craig/Trump. Johnson, like many who have analysed the political shifts to the right since 2016, conflates the issues of Trump and Brexit through Russia’s involvement in both. China is becoming a player, but it is Popov who seems to be the puppet master, always ahead, always in control. There’s a funny scene in which Edward Barnard is asked to drive into Russia to extract a compromised Russian agent who may now be in danger. The plan is to get him out through Finland in the boot of a Rolls Royce. Somehow, Barnard unwittingly ends up at Popov’s country retreat where Popov is holidaying and Popov, ever competitive, challenges Barnard to a race to the border, except driving each other’s cars. Popov outpaces Barnard, gunning the car dangerously across ditches and rocks in the forest. When he reaches the boarder ahead of Barnard he quips, We were bouncing all over the place but she hung on in there. Hate to think what it would be like for someone in the boot.

Of course, Popov is working behind the scenes to influence the outcome of the Brexit vote and to destabilise Europe as much as he can. There are Russian moles in the campaign, and the sex tape which later implicates Craig is initially used to embarrass Edward Barnard, a key figure for the Leave campaign.

The book is fairly broad in its range of characters and settings. For instance, both Edward Barnard and Popov end up visiting a cattle station in the Kimberley at different times, a region in the north of Australia, to talk with Mickey Selkirk, head of the Selkirk media empire. I suspect Selkirk is based on Rupert Murdoch, owner of Fox News, a stalwart supporter of Trump. Murdoch was born Australian but adopted American citizenship years ago. Nevertheless, in this incarnation, Popov and Barnard travel to Australia to see Selkirk. The visit provides an interesting incident, given that I am Australian. An attempt is made on Barnard’s life when what is identified as a Sydney Funnel Web, one of the deadliest spiders in the world, is introduced into his bed. The fact that the Sydney Funnel Web doesn’t exist at all in this region is later dealt with in the story, but the toxicologist’s identification of the spider, described as “a black spider, about the size of a baby’s fist, with a large red spot on its back” as a Sydney Funnel Web is mystifying, along with Johnson’s own description of the spider as an insect. It’s a small detail, but the mistake is one of several in the writing which suggest the speed at which the book was written: It landed in a clearing fifty years from the campsite.

The other thing about the range of characters in the novel is that one never truly gets a sense of them as people. They are mostly place markers for real personalities. Edward Barnard is possibly the closest one gets to a character with an interior life with whom one might identify, and this is limited. The other main characters are largely defined by their actions within the political sphere alone. Beyond the main cast the book is populated by figures that appear and disappear so often that even when someone has been introduced before, Johnson feels it necessary to introduce them, even a third and fourth time, according to their position. It’s helpful, along with the character list at the front of the novel, but you’re aware as you read that the narrative skips over events like a rock on water and your presence as a reader is similar to being at a party where you are unknown.

As Johnson says in a note before the novel Kompяomat is, to use an old-fashioned term, An Entertainment. I guess that’s accurate enough since as a satire one might say that there are some funny moments in the book but the events it mirrors are so self-evidently outlandish that the satire is barely up to the task. Kompяomat, in the end, is entertaining enough, even if the writing is sometimes sloppy and the lack of characterisation (or its dependence on real people) makes the fictional versions less engaging than their real counterparts. 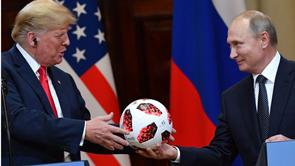 Putin's gift of a soccer ball at Helsinki caused a minor stir when speculation began about whether the ball could be bugged. A manufacturing chip allowed soccer fans to link to soccer promotions using the chip, but there was next to no liklihood that the chip could be converted as an espionage device.