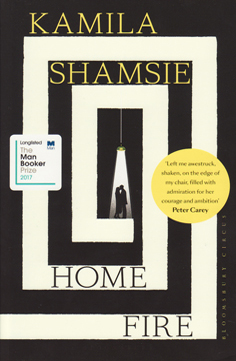 Kamila Shamsie acknowledges her debt to Sophocles’s play, Antigone, at the end Home Fire. The similarities in plot are obvious enough, and there is a direct relationship between characters in Sophocles’s play and characters in Shamsie’s novel. King Creon of the play becomes Karamat Lone, the British Home secretary, born a Muslim but shunned by many in the Muslim community for his hard-line views and his attack on immigrant rights to citizenship. Aneeka is the Antigone character, twin sister to Parvaiz (Polynices in the play), who has left Britain to join ISIS, but who wishes to return. Their sister, Isma, is the Ismene equivalent, although she plays a much larger role in this novel. It is through her that Aneeka meets Eamonn (obviously Sophocles’s Haemon), son of the Home Secretary.

For anyone familiar with the play, some of the broad progression of the plot might be guessed at. However, Shamsie’s modern setting gives the novel a new twist on the old story, and contextualises current social and political debates about Islam and human rights.

Shamsie tells the story from multiple perspectives. Beginning with Isma who is trying to fly to America to start a PhD, we see the quotidian obstacles and prejudices facing many Muslim people as she is grilled for so long by airport security that she misses her plane. Importantly, Shamsie records the blossoming love affair between Eamonn and Aneeka from Eamonn’s perspective, and the grooming of Parvaiz and his decision to join Farook, an ISIS terrorist, in the declared Caliphate, from Parvaiz’s. Eamonn may be portrayed as gullible by his father, but we empathise with his decision to begin a relationship with Aneeka, just as we understand Parvaiz’s pain, who goes searching for a surrogate father in Farook, not a jihad.

Shamsie’s structure works particularly well in the section dealing with Aneeka, since she is the only character not given an unadulterated voice. Her voice is filled with rage and grief, towering with emotion, yet at the same time is trivialised by newspaper articles and tweets interspersed with her narrative. The effect is not diminishing, however, but gives the reader a stronger sense of the injustice that is meted out.

There is no main character who seems to act from malice or hate in the novel, excepting Karamat Lone and Farook, a more minor character who persuades Parvaiz to adopt a new life. Farook’s calculated grooming of Parvaiz and his manipulative methods are reprehensible. Karamat’s ambitions to one day be prime minister makes him forget his own humanity, not only for those whose lives he governs, but even for his own family. Farook and Karamat are both questionable father figures in a book that concerns itself with the influence and power of father figures to shape their sons, and thereby reshape the future as a replica of the past. Eamonn says of fathers, They’re our guides into manhood … We want to be like them; we want to be better than them. We want to be the only people in the world who are allowed to be better than them. Isma encapsulates the problem more succinctly: For girls, becoming women was inevitability; for boys, becoming men was ambition. It is this ambition that shapes Eamonn’s future, professionally emasculated by a mother who encourages him not to work; that shapes Parvaiz’s future, longing to be worthy of a father he never knew.

I think this is an interesting point that the book articulates: that what men do (and I necessarily mean men here) is not a simple reaction to institutional pressure. By institutional I mean monolithic paradigms like Islam or the State: that terrorism is not necessarily a simple product of ideology, nor is conservative reactions that call upon the monolithic apparatus and power of the State – laws that deny citizen rights, for instance – a product of impartial and moral decisions.

Karamat Lone’s decisions, first to revoke the British citizenship of dual nationals heading overseas to support terrorists, and further, his suggestion that those who only have British citizenship should also be made stateless under those circumstances, raises two questions. The first, of course is the extent to which Karamat’s extreme views are driven by his need to prove loyalty to the state, since so many instances of racial judgment in the book denigrate men of Karamat’s colour. This includes statements made by Karamat, himself, which suggests a desire to deny his identity: to claim a new identity as a true British citizen. Karamat, like Parvaiz who he would condemn, is not a man driven purely by ideological imperatives, while Parvaiz reflects that he is the terrorist son of a terrorist father, but feels helpless to break free of identity, as Karamat has done: He didn’t know how to break out of these currents of history.

The second question raised by Karamat’s decisions is that of the difference between what is law and what is justice. Isma voices a sense of injustice at the beginning of the novel when she considers the qualifying declensions that function to fabricate new realities around identity:

…if you look at colonial laws you’ll see plenty of precedent for depriving people of their rights; the only difference is this time it’s applied to British citizens, and even that’s not as much of a change as you might think, because they’re rhetorically being made unBritish … The 7/7 terrorists were never described by the media as “British terrorists”. Even when the word British was used it was always British of Pakistani descent or British passport-holders, always something interposed between their Britishness and terrorism.

Of course, the other half of Isma’s pithy observation, that becoming women was inevitability also reflects that the lives of women are also shaped, if not by currents of history, then by the monolithic paradigms they serve. There is a scene in which an injured Islamic woman is left in pain without any help because her hijab has slipped and only men are present. None can help her. Her fate is determined not by who she is but by what she is. The same goes for Terry, Karamot’s wife, who was a successful businesswoman before her husband entered politics, yet left her career to become the silk draped over [his] too-dark, street-fighting muscles.

It’s problematic writing about a book like this, since much of the story should be a surprise, even for those familiar with Antigone. For those familiar with the play, it will become evident that Shamsie has not had to do much to adopt the thematic concerns. The novel does not insist that It is by the laws of Heaven that one must live, as does the play; rather, Shamsie’s novel explores the possibilities of a morality that serves humanity, rather than laws that serve ideologies.

Antigone donnant la sépulture à Polynice by Sébastien Norblin (1825)
In Sophocles's play Antigone buried her brother against Creon's edict and suffered the consequences. Shamsie's book is based on the story of Antigone, but is also fresh and surprising.