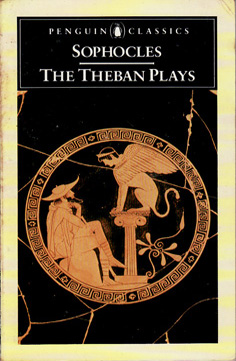 It has probably been around thirty years since I last read Antigone. I was drawn back to the play by a novel I am currently reading, Home Fire by Kamila Shamsie. Antigone is the third of Sophocles’s Theban Plays based around the tragic story of the house of Labdacus which began with Oedipus the King, famous for the fate of its tragic hero who, against his best precautions to avoid a prophecy, marries his mother Jocasta, having unknowingly killed his own father beforehand.

As in other Greek tragedies, a sense of the implacable nature of fate pervades the story of Antigone. Already cursed by a family at war with itself, Antigone bears the terrible legacy of her parents like an Original Sin from the Christian story: This is the expiation you must make for the sin of your father, she is told.

Two of her brothers, Eteocles and Polynices are dead, each at the hands of the other. Polynices has led a force against the city while Eteocles has tried to defend it. Now, with the battle over and peace finally a possibility, Creon, the king, makes a rash decision. He will have Eteocles buried suitably, but he determines to leave Polynices outside the walls of the city, to rot and be eaten by animals and birds. Antigone, however, feels the decision is unnatural – against the very laws of the gods, in fact:

It is this belief that drives Antigone to defy Creon’s law and endanger her own life. Concern for the will of the Gods underlies much Greek tragedy. If Aeschylus’s The Persians, a play based around the Battle of Salamis during The Persian Wars, is to be credited, it was the Persians’ defiance of the decrees of the Gods that were a large factor in their unexpected defeat.

For a modern secular audience, the premise of the play, pitting the hubris of a king who backs the fallible laws of humans against those of the Gods, may be a little alien. But I think the reason this play still resonates with modern readers is that it is also a play that has something to say about war and hate, about the worst aspects of our nature, and the horror of entrenched and unforgiving ideologies. Antigone’s grief for her brother is palpable in her despairing decision to martyr herself upon his behalf. It is a study in loyalty, but it is also a study in despair, since the audience is given a counterpoint to Antigone, her sister Ismene, who cannot bring herself to defy the laws of Creon or waste her own life.

Creon, meanwhile, represents an inability not only to empathise, but to understand the basis of the anger he has instigated. He threatens the sentry who brings news of Polynices's burial, believing he is only after money, and later warns Tieresias, the blind seer (there’s an irony) not to expect to gain from his advice. Creon lacks insight.

For a modern audience, Creon’s problem also lies in Creon’s attitudes to women. Creon represents power and the law, while Antigone is not only a subject, but a woman. We’ll have no woman’s law here, while I live, he tells Antigone, nor will he bend his law, least of all for a woman. When he imprisons Antigone, Creon speaks of the Proper place for women, although I think he means that they should obey patriarchal law. The misogynistic tone continues in Creon’s advice to his son, Haemon: Do not be fooled, my son, By lust and the wiles of a woman.

Apart from its historical significance, I think these are some of the reasons why the play still finds an audience. If the civilisation that produced it is long gone and alien to us, the people it portrays are very much like us, and the play examines issues that our societies still grapple with. Perhaps that’s why it has the power to inspire, still, like the book I am currently reading by Shamsie, which is based upon Antigone.