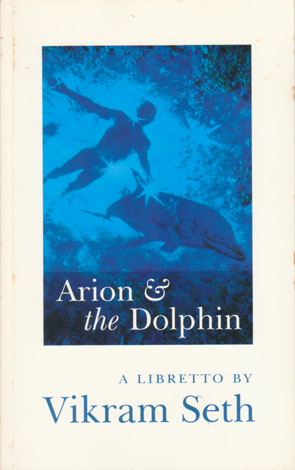 Note: Since the story of Arion and the Dolphin is based on Greek myth and has been around for thousands of years, I won’t bother withholding any aspects of the plot in this review.

Vikram Seth is best known for his epic novel A Suitable Boy. I was encouraged after reading that novel to buy his other works, including Arion and the Dolphin. Unlike his novel, however, Arion and the Dolphin is only short. It takes less than half an hour to read. As its subtitle suggests, it is a libretto, written in collaboration with Alec Roth who wrote the music, to be performed as an opera by an assortment of professional and amateur players.

I had long neglected this book but was encouraged to finally read it after I finished Stephen Fry’s Mythos. After I read it, I checked my bookshelf for this review and reread Robert Graves’s and Herodotus’s retellings as well. As you would expect from a story this old, each version is slightly different. Basically, it is the story of Arion who seeks leave from the tyrant Periander of Corinth to take part in a music contest in Sicily. He wins the contest and is showered with prizes and gifts. On his way back to Corinth jealous sailors demand his treasures and Arion jumps overboard after singing them a song to delay their killing him. He is rescued by a dolphin who returns him to Corinth ahead of the ship. When the sailors arrive, they lie to Periander about Arion’s fate – he was either washed overboard, joined another ship or has chosen to stay longer in Italy, depending on which version you read – but they are caught out when Arion appears before them. In all versions, the dolphin dies.

Anyone familiar with Seth’s Beastly Tales will feel a familiarity with this work. Like Beastly Tales, Arion and the Dolphin is musical, with traditional rhyming structures and internal rhymes that are catchy, as well as a prodigious and ridiculous use of alliteration used for comic effect in set moments of the libretto. However, I immediately noticed that Seth departs from strict rhythmic constructions, such as his use of iambic tetrameter which he used widely in Beastly Tales. Instead, he adopts a more varied meter for a large part of the libretto, with some exceptions, like the children’s welcoming song in Scene 9, which is similar to traditional ballad forms. Herodotus credits Arion with the invention of the dithyrambic form, which was an impassioned or enthusiastic form of poetry often used for works dedicated to Dionysus, that adopted a wild and irregular rhythm. It seems appropriate that Seth has experimented with the form here. It gives Seth a broad pallet from which to paint his characters and scenes, much like the way Shakespeare used different poetic forms mixed with prose.

Seth has also tried to make the story relevant to modern audience, and in doing so has kept it fresh and made it his own. Sure, there are places in the text where his source material is all too obvious. For instance, the scene in which Arion attempts to barter his new-found wealth for his life is drawn almost directly from Graves’s account. In Seth’s version the captain rejects Arion’s offer:

Graves’s version of the scene is similar:

‘You would only retract your promise on reaching Corinth,’ said the captain, ‘and so would I in your place. A forced gift is no gift.’

Yet Seth does not limit himself to any one version of the story. In Graves’s version the sailors’ lie has Arion still residing in Italy. And the sailors are executed as soon as the lie is revealed. In Seth’s version the captain claims Arion transferred to another ship which was on its was to Lesbos. Instead of immediate execution, Arion begs Periander to spare their lives, and finishes the play with a song, hoping to change the tyrant’s mood.

Another point of differentiation lies with Fry’s estimation of man and the gods in Mythos – a kind of coda for his book, if you will:

Fry is attempting to articulate what the myths meant to the ancient Greeks. But Seth is writing for a modern audience, and a key insight from his libretto might be drawn from a refrain, spoken by the captain and his sailors:

This modern perspective encourages other innovations from the traditional tale. Fry’s version has the dolphin die because of well-meaning but ignorant workers who don’t know how to look after it. Herodotus speaks of a small figure of a dolphin and man in Arion’s temple, which is attested by Pausanias, but does not directly mention the dolphin’s fate. Graves states the dolphin soon succumbed to a life of luxury. Seth, however, relates a grimmer fate:

The fisher folk turn the dolphin into a sort of circus act. They force it through hoops, make it leap for dead fish, collect money for it.

The first spoken part of the next scene is by a messenger informing Arion that the dolphin is dead. The dolphin’s fate, reminiscent of the most extreme scenarios of captive dolphins in the modern world, make Seth’s adaptation of the myth a more relevant to a modern audience concerned with animal cruelty. It is not surprising, then, that Arion’s final song has overtones of an environmental message, also:

Arion and the Dolphin is a quick, entertaining read, written with all the skill, humour and insight of Seth’s other works. Apart from this, Seth has tried to give his characters a level of psychological depth – the captain, threatened by his subordinates into betraying Arion, is torn by his betrayal and is the best example of this – and imbues his libretto with issues relevant to a modern audience. I don’t know how well this translated to the stage or how popular it was, but I can imagine this being used with primary school children as part of a wider program about environmentalism, music and poetry. 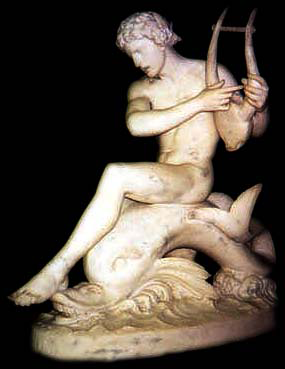 Herodotus claims Arion was a real person and there is certainly nothing in the tale which places it outside the realms of possibility, since unlike other Greek myths, it does not feature the gods or supernatural. Stories of people being rescued by dolphins were certainly known to the ancients. This depiction of Arion atop the dolphin's back, however, is obviously somewhat fanciful.