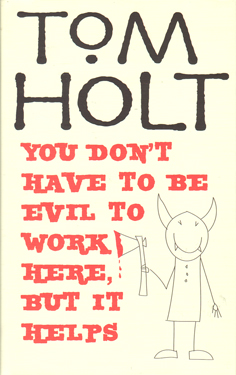 This book has sat on my bookshelf unread for years. I cracked it open when I first bought it in Sydney, read a couple of pages, and then decided I wasn’t interested. I can’t really remember what turned me off reading it, whenever that was. I can’t really remember why I bought it, either. It might have been the ‘massing effect’ (this is a term I’ve just made up, but companies like Ikea use it to sell all sorts of ordinary household items). The massing effect is the appeal an item gains by appearing in a retail outlet in significant numbers. When I bought this book, I remember there being quite a number of Tom Holt novels on the shelf. Perhaps I felt I had discovered an interesting new author. Maybe I was feeling whimsical. I don’t think I have seen a Tom Holt novel in a book shop since that day, even though his back list appears quite substantial.

This is a pretty light read. Although it is not a long book, it is also not a short book. However, I managed to fly through most of it over the course of two days. Let’s count this as a holiday read. A book you want when the grey cells need some relaxation.

The plot centres on two companies, J.W.Wells & Co., which employs Connie and Cassie, and Hollingshead and Farren (H&F) which is owned by Colin Hollingshead and his son of the same name. Colin (the son) has little interest in the manufacturing of plumbing widgets, while Mr Hollingshead is a hard-nosed businessman, willing to do anything to keep his business afloat in the rising sees of financial uncertainty. To this end he seeks the services of JWW to help cut costs by providing supernatural workers who will need no wages, holidays, breaks or any other benefits. The only thing is, he will have to sell his soul to the devil as part of the bargain, because JWW is a firm of Magicians and Sorcerers who specialise in magical solutions with offices in the realms of death.

The only thing is, JWW is undergoing a period of upheaval, too. The company has been bought anonymously and a firm of auditors is now interviewing employees and examining the books. As a result, company stalwart Connie Schwartz-Alberich, alienated by the process of the appraisal, sails perilously close to losing her job. It might be the mindless questions: where do you see yourself in five years’ time?

All this is just a starting point for the plot which has a number of twists and turns. Tom Holt actually does a fairly good job at world building with this story. It’s well written and quite witty throughout. For instance, Benny, a colleague of Connie’s, when asked the question in his interview, takes it literally and pulls out a crystal ball to check. In an hilarious scene he discovers that exactly five years from that moment he will be having sex (displayed quite graphically in the crystal ball) with a woman he hasn’t met yet. The auditor declines to ask further questions.

The novel is, in some ways, similar to Jasper Fforde’s Thursday Next novels, in which the mundane and the extraordinary are both part of the protagonist’s working life. Actually, they’re not much alike, really. Fforde’s novels are more accomplished; his concept of the bookworld is more appealing and his world building more detailed and satisfying. I was also reminded of Ben Aaronovitch’s Rivers of London, a supernatural detective story. This was closer in style to Holt’s book, although I thought You Don’t Have To Be Evil… was much better than that: better written and more engaging. I never bothered to buy any more of Aaronovitch’s work after that first novel.

For while Holt engages in this workaday fantasy, there is a comic narrative voice that makes his story more engaging, as well as a satirical intent that anyone who has ever worked in an office could identify. As Cassie muses, going to hell would be A bit like a bad day at the office, really. Maybe that was Hell, and Bosch and Breugel had painted in all the bird-headed fiends simply because offices hadn’t been invented yet. She describes the new boss as some kind of supernatural bureaucrat.

The novel is written from the point of view of the competent underling; that person who knows how everything works and could do their job if management would just get out of the way:

They come up with these stupid ideas, you go along with them for a bit till they self-destruct, and then you can get back to doing things properly, like you’ve always done them. No harm done, everyone’s happy, and we remain defiantly unspoilt by progress.

The story not only reflects the classic tensions between employees and management but also the troubles faced by British industry during the 1980s and beyond. Holt uses this to good comic effect throughout. The complications and situations have a touch of Wodehouse, at times. And there is an element of detective fiction too, given that uncovering new management’s intentions is a large part of the plot – it was also this aspect that reminded me of Aaronovitch – which is meant to drive the interest in the story. However, I found the satiric vignettes more interesting, more identifiable and relevant, than the convoluted plot points which turned upon imaginary laws and powers. It’s a prejudice I have expressed against fantasy in the past. I found the earlier part of the story that was not encumbered by fantasy elements more interesting than much of the later unravelling of the plot.

So, when it comes down to it, would I read another Tom Holt novel? As I said, he’s better than Aaronovitch, in my opinion. I found Aaronovitch had little to offer beyond the fantasy elements. But I doubt I would buy another Tom Holt novel, either, even if I could find one. Perhaps if one was laying around. But I don’t regret spending time on this one. It was amusing enough. That’s kind of how I feel about it.