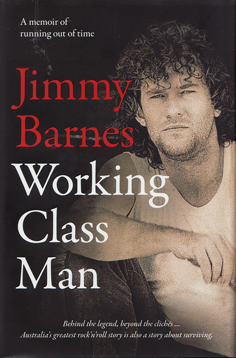 When Jimmy Barnes had his first book, Working Class Boy, published in 2016, I was probably one of the first people to rush out and buy it. You see 'Barnesy' was from my era. His first memoir, Working Class Boy was a big shock, realising the life he'd led as a small child, but it was this second memoir that truly provided the complete picture.

I must admit that I never expected him to have had such a hard life growing up, not only from a family point of view, but from the true sense of ‘sex, drugs and rock 'n' roll’, not to mention the alcohol that went with it.

I was a seventies kid – leaving high school in the mid-seventies, so I grew up with all the music that Barnes talks of in this book, and for me it was a trip down memory lane with a shunt of reality in the process.

I led a fairly sheltered life, going to a girls’ school, with a swig of Marsala at a party about the extent of my wild experiences. I knew kids from the beaches, whose life was a weekly barrage full of being hung over, spaced out, doing the rounds with the local survives and generally being wild compared with our quiet party nights sitting around listening to music and talking.

Picture this: a whole school hall full of girls, cheering and screaming for up-and-coming stars at one of our lunchtime concerts – Skyhooks, Dragon and Sherbet – all of which I remember vividly. We also skated to AC/DC at the skate rink at Central. That was our bit of fun. Little did we know that each of these groups would go on to become some of the greats of the future. Ah yes, these were the days when live bands were cherished, a far cry from the current lockout laws which have killed the vibrant city of Sydney at least in 2017.

In Working Class Man, Barnes talks about these and the other greats such as Split Enz, Rose Tattoo, and of course AC/DC and Midnight oil; bands which has truly stood the test of time. It was only last month that our resident ex-member of parliament, environmentalist, Peter Garrett, reformed his band, Midnight Oil, to raise interest and funds, to save the Barrier Reef.

Barnes recalls his shows on Countdown, a regular Saturday top-40s show for most teenagers of the time. I must have been living under a rock as I didn't know Barnes’s band, Cold Chisel, had destroyed the set while on stage. It’s incredible the things you learn many years later. He talks of doing shows like the scene from the movie The Blues Brothers, where they were virtually inside cages and had to play what the customers wanted for fear of their life.

I always thought that Cold Chisel were world renowned, but despite trying to break into the scene overseas, in 1981, Barnes concluded that the US was not for him. Like so many of his songs, based on personal experiences, ‘You've Got Nothing I Want’ was a direct response to his US experience. It was and still is, a very different country to Australia.

Barnes certainly had a lot of amazing opportunities along the way, including when he recorded a song with Tina Turner, ‘Simply the Best’. He flew to Europe to record the song which soon became the NRL (National Rugby League) anthem here in Australia.

I knew Barnes drank and took drugs – it was a part of the music scene for bands – but I think the most heart wrenching part for me as I read this book was realising that throughout his life, he had a loving wife and made a family, yet still continued to be completely dependent on drugs and alcohol to the point that both nearly killed him on many occasions. He also suffered financial ruin for a time as well. I still can't believe that even with counselling and rehabilitation, he continued to make the same mistakes over and over and it took him so long to break free.

Jimmy provides a candid look at his life, warts and all. He doesn't try to pretend it has been roses, or that he was badly done by. He admits that he has a temper and isn't afraid to use it, but also that more recently with children, now grown up, and grandchildren, that he is trying to improve his lifestyle.

There were times reading this I wanted to laugh, but more often I wanted to cry. You just don't realise what someone else has been through or is going through. Jimmy went full circle – from a small band to huge success, to solo career and then back with the band again. He changed band members, managers. His family suffered. He almost alienated family members because of his temper and his addictions. He wanted everything his own way. Working Class Man is an open account of his wild life. No matter what he did, the band and his musical career was always what he gave a hundred percent.

I like to read biographies of personalities I'm interested in. For me this one also gave me a chance to reminisce about those high school days, now long gone. Based on the life Barnes had as a kid, I was surprised at how well written it was. He certainly did a great job. (He did not use a ghost writer).

I am hanging out for his next instalment. I can see why it was listed as number 2 on the Book Club Book of the Year list for 2017.

This book deserves five stars for sure. And as the year comes to an end, I think it's also my pick for my book of the year.