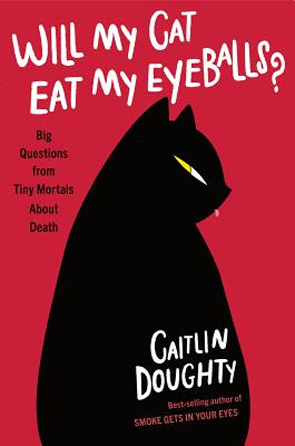 Will My Cat Eat My Eyeballs?
Caitlin Doughty

I had a tough time reading this book. I don't mean that I find the subject matter disturbing and hard to process. I mean it literally. I showed my copy to my cat, Pickles, to see if he had any comments to make on the subject. He gave the book what I thought was a disinterested sniff, but later I saw him eying me speculatively. Several days later he was investigating the book which I had left unattended on the table, next to a glass of water. He knocked the glass over and my book was soaked. It took me almost a week to dry it out, back to being readable, but sadly no longer looking pristine. Several days later, Pickles nudged the now dry book off the table. It landed with a thud on the floor. I should add here that Pickles is in general a very well-behaved cat around books. He likes sitting on bookshelves or in little libraries, but he does not damage books or knock them off shelves. There must be something about this book which has captured his interest. Perhaps I've been late with his dinner a few to many times and he wants to know his options? I am beginning to wonder if I need to acquire a copy of How to Tell If Your Cat is Plotting to Kill Youem> by Matthew Inman. At least I have been reassured by the book that my eyeballs are safe, at least for some time. Apparently cats favour softer, easier-to-access body parts for their initial feasting: lips, tongue or eyelids. It will be some time before Pickles works his way to my eyeballs.

But enough of my imminent demise at the hand (claw?) of my cat, and back to the book itself. Caitlin Doughty is a mortician with a degree in mortuary science. She owns a funeral home in California. She is a Blogger and YouTuber, creating the popular YouTube channel Ask a Mortician. She is also the founder of The Order of the Good Death, an association with a goal of reforming Western attitudes about death, funerals and mourning. This book would seem to fit well with the goals of the association, as it takes questions which she has been asked by children about death and answers them honestly.

Doughty has previously written books for adults (Smoke Gets in Your Eyes and Other Lessons From the Crematory and From Here to Eternity: Travelling the World to Find the Good Death). Will My Cat Eat My Eyeballs? might be aimed more at children, but it is still full of fascinating information for adults. The book deals with serious subjects and answers each question in detail, but does it in a very darkly funny way. Her aim is to dispel many of the fears people in the West have about death.

The book is written in an easy to read format, with an upbeat tone. Each question forms a separate chapter, each only a few pages long and illustrated with fantastically macabre black and white drawings by Dianné Ruz. It is easy to pick this book up to read a chapter or two, then leave it for a few days or even weeks (for example if you need to dry out the pages) before picking it up again for a few more chapters. The book is filled with fascinating information, on subjects I had never previously thought about but was happy to consider once I became aware of them. Just how do they bury bodies in the frozen northern hemisphere in the middle of winter? Living in a temperate climate, I had never previously thought about the difficulty of digging a grave when there is over a metre of frozen snow on the ground. Or just what happens when someone dies on a plane? Or could make a grand show at your cremation by swallowing bags of unpopped popcorn just before you die (a popular meme). These are just a few of the fascinating questions Doughty considers.

Apart from the humour, Doughty’s book is packed with scientific and legal facts. The science is needed to explain things like how a body decomposes after death, and the legal aspects are needed because many aspects of what happens to our bodies after we die is controlled by the government. There are even a few moral issues discussed, such as whether you really should keep the skulls of family members, even if you were legally allowed to. There is a general feeling in the community that it is wrong to be curious about death customs, that people who think about such things are disturbed. So, the subject is avoided and most people remain ignorant about what will happen to their bodies when they die. This book says that it’s okay to be curious and seeks to remove a few of the taboos our society has about how we deal with death. 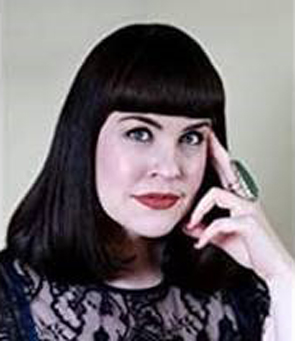 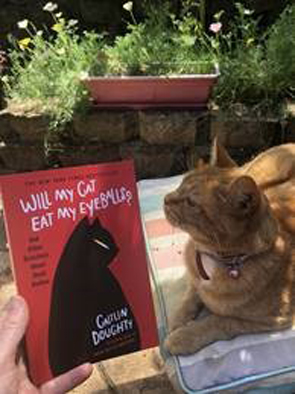 My cat, Pickles
Pickles checks out the book and considers dinner options