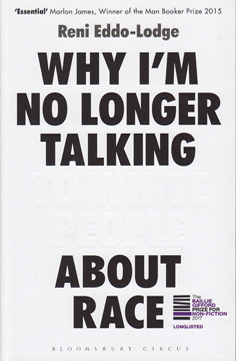 As a white, middle class, middle-aged man, I’m part of the demographic Reni Eddo-Lodge refers to when she speaks of the emotional disconnect she faces when trying to address race issues. She identifies many problems facing black people and people of colour (which includes most non-whites in her discussion: so, Asian people would be included, for instance) but when she identifies social groups as specifically problematic to talk to, it’s my lot. Naturally, this is a very confronting stance for her to take, and it’s meant to be confronting. Eddo-Lodge opens her book with a post she made to her blog in 2014 which brought her enough attention to eventually land a publishing deal which became this book. She writes:

At best, white people have been taught not to mention that people of colour are ‘different’ in case it offends us. They truly believe that the experiences of their life as a result of their skin colour can and should be universal. I just can’t engage with the bewilderment and the defensiveness as they try to grapple with the fact that not everyone experiences their world the way they do. They’ve never had to think about what it means, in power terms, to be white, so any time they’re vaguely reminded of this fact, they interpret it as an affront.

One might argue that Eddo-Lodge risks losing many readers here, but I guess her argument is that she is not speaking to white people, even though she concedes that in reality, she has to. But what she is really grappling with is the problem of talking to more liberal minded white people, the kind who could never disparage a black person on the basis of race, or consciously judge a person by the colour of their skin. This is the kind of white person, surprisingly I would think for many liberal-minded white people, that Eddo-Lodge has most problem with. With open racists, she says, she at least knows where she stands. And I should make it clear here: she is not calling liberal-minded white people racists, but argues that they are the beneficiaries of a racist culture and system; what she terms structural racism.

Part of the problem she faces is that she specifically addresses racism in England. America’s history of slavery is well-documented and the racial issues that have evolved from that history have long been represented in novels, film and covered by the media. But English slavery was not as overt as the American experience. Many black slaves worked in colonial settings, and England did not fight a civil war before slavery was abolished in 1833. It is easier to assume, then, that England is not as racist as its former colony. But racism, as she points out throughout this book, isn’t just a racial slur.

Eddo-Lodge insists that for progress to be made white people need to recognise the systems and assumptions that are white-centred and disadvantage black people. Anti-racist work – the logistics, the strategy, the organising – needs to be led by the people at the sharp end of injustice. But I also believe that white people who recognise racism have an incredibly important part to play. Part of the problem, of course, for white people, is recognising and accepting the reality of structural racism. If I have followed Eddo-Lodge’s argument, understanding the problem first requires an act of empathy and imagination, and to try to engage in that is also fraught. What if I say, as a white middle-class male, that I feel my time as a stay-at-home father at least helps me empathise with the point she is making? The statement is potentially patronising to both black people suffering racism and women. But to understand a different perspective, people need ways in, whatever that may be. To a degree, Eddo-Lodge licenses this approach through an example I will discuss shortly.

So how is my example anywhere near relevant? When my two sons were too young for school I became a stay-at-home father. It was a big change for me, having to lose the status of my job, my regular contact with other adults as well as more abstract benefits like intellectual stimulation. I became the main cook and house cleaner and had to find ways to entertain the kids each day with next to no money. It was tiring and difficult. So, the first insight gained was the difficulties many women – women still being the predominant carers of children in our society – face. But there was another unexpected insight in this experience. As a father with two children in public, I had experiences that women have told me they experience, but I suspect in not the same way. For instance, when I needed to change a nappy in public, I was suddenly aware of the lack of change facilities in men’s toilets. There were parents’ rooms, which I used, but being a male amongst breast feeding women, I always felt a little unwelcome. As the only male in play group I found it difficult to interact with many of the women, most of whom avoided me. I was never invited out by other women as part of social groups from playgroup. I was essentially alone. When I went out in public I was often criticised for the way I did things – an experience I know many women have also had. But there was an assumption that I didn’t know what I was doing. My overall feeling was that if I was a woman, things would have been a little easier for me in this particular role. Society set parenting up with the expectation that women are caregivers. I notice that things have changed a little since then. I’ve seen change tables in one or two male toilets, but almost never, still. But that’s the point. Until society does not recognise you as a norm – in Eddo-Lodge’s case, race, in mine, a stay-at-home dad, you are blind to the structural assumptions made by society and how they may affect a group of people.

My point is this: structural racism – or let’s call it structural prejudice for now, to temporarily remove it specifically from race – acts when it assumes a norm. My experience of it was the feeling that society was structured to support women in child rearing roles. I felt, at least, in some small way that this made it harder. Eddo-Lodge uses a similar example to try to explain “white privilege”, which is the basis of structural racism. She tells the story of a work commute she once had to do which required her to ride her bicycle to the train station before catching a train:

An uncomfortable truth dawned on me as I lugged my bike up and down flights of stairs in commuter-town train stations: the majority of public transport I’d been travelling on was not easily accessible. No ramps, no lifts. Nigh on impossible to access for parents with buggies, or people using wheelchairs, or people with mobility issues, like a frame or a cane. Before I’d had my own wheels to carry, I’d never noticed this problem. I’d been oblivious to the fact that this lack of accessibility was affecting hundreds of people. And it was only when the issue became close to me that I began to feel infuriated by it.

For me, this was the passage that made me think of my time as a stay-at-home father. The point of my example is that finding some way to empathise and understand is important. Some will rightly claim that my experience was trivial in comparison to racism, but that wasn’t the point. The point was that it wasn’t really possible to understand how a system, itself, serves to disenfranchise, to alienate and to target a certain group of people unless you understand that one’s position – in this case, one’s whiteness – is easy to assume as a norm, when you are a part of that system. Outside the white system, Eddo-Lodge documents a long history of racism and prejudice against blacks, as well as the systemic barriers to opportunity and dignity that black people face. The problem of talking to white people about race, Eddo-Lodge argues, isn’t that the most extreme racists might attack with racist slurs, or worse, but that moderate white people who are otherwise sympathetic, are blind to the structural barriers of a society that benefitted from black slavery to grow its wealth, that has a long history of suppressing black people and therefore affecting generations of black people and their opportunities, but who cannot credit this reality.

Eddo-Lodge documents these problems, first by putting modern structural racism within an historical context of slavery, civil rights activism and active attempts by the white status quo to suppress change. Her book covers detailed examples of how government, business and society work with assumptions about race that suppress black opportunity and dignity, as well as the way these same institutions push back against social progress, by creating a perceived culture of white victimhood and fear. Eddo-Lodge also looks at issues relating to black feminism and its white counterpart, as well as how social class is intrinsically tied to race. Her voice is angry at times – anger, she argues, is needed – but always intelligent and well informed. This is a book that explains a perspective about racism that goes well beyond racial slurs and taunts, and examines how society, itself, is structured to maintain white power structures. Some readers will be affronted by her arguments, but her points are made with reason, with examples and a lifetime of experience. I would be surprised if some people didn’t find her arguments personally affronting, but as she takes pains to say, she is not interested in attacking white people, per se, but the power structures and assumptions that stymie change. This is a powerful book and it’s a pity that it won’t be read by nearly enough people. 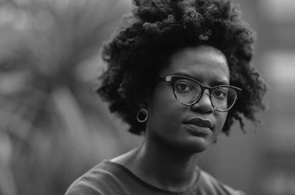 Colour blindness does not accept the legitimacy of structural racism or a history of white racial dominance.

Repeatedly telling ourselves - and worse still, telling our children - that we are all equal is a misdirected yet well-intentioned lie. We can just about recognise the overt racial segregation of old. But indulging in the myth that we are all equal denies the economic, political and social legacy of a British society that has historically been organised by race.