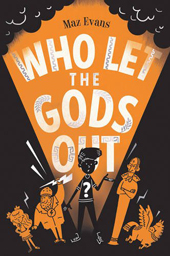 Who Let the Gods Out?
Maz Evans
Toriaz

Who Let the Gods Out is a fun read. I think my 10 year old will love it, both for the action packed storyline and the constant flow of one liners. While it’s aimed at her age group, this is still an enjoyable read for adults. There are lots jokes that adults will probably appreciate more than kids, and the storyline holds interest.

Poor Elliott is having a tough time, trying to cope with his mother’s dementia and keep up at school while the bills continue to pile up. He really doesn’t need any more stress in his life. But he gets even more turmoil when the constellation Virgo crash lands in the cowshed, and a daemon gets released. Elliott and Virgo turn to the greek gods for help, all of whom conveniently live in England. After all, where else could “a group of eccentric individuals with strange personal habits fit right in?”

The gods add to the chaos of Elliott’s life, but also help ease it a bit. While they can’t actually do anything about the serious problems (they have no powers to heal), at least they give him support and friendship, provide him with comfortable surroundings, and help him look after his mum. They can’t magically make him pass his exams at school either, but at least with Athena’s intensive tutoring, he’s in with a chance of passing by himself.

This is the first book in a series, and I will probably pick up the next one when it’s released. Hopefully the Queen will make another cameo appearance in the next book. She was kickass awesome in this one.