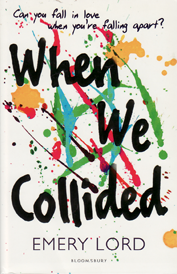 When We Collided
Emery Lord

This is a story which would appeal to young adults, based on the topsy-turvy relationship between two main characters, Jonah and Vivi. Jonah has recently been thrust with the responsibility of looking after his siblings after his father died and mother is unable to cope. Vivi, who has just moved into his longstanding home town, provides a breath of fresh air for him, though not all his siblings share his joy. Their lives become entwined as he struggles to maintain the family restaurant and she holds down a job at a local art store.

As their relationship progresses, it is obvious that Vivi has some secrets which she has been hiding, though there are clues along the way as to what may have happened. Jonah also has undergone difficult times and sometimes can't understand Vivi's actions or reactions.

The book has you progressing through a variety of feelings - including joy, sadness, madness, chaos, distress and relief. For those who have known someone experiencing what Vivi is going through, or indeed those trying to cope under difficult circumstances, the images may seem all too real, but it is simply written and both beautifully and realistically.

The ending may not prove popular among the Hollywood movie types, but it was one of the things which I really liked, taking off on a tangent from what you maybe would prefer to see.

Perhaps young females would find this more appealing than males, but I think young men would certainly empathise with Jonah and Vivi along the way also if they were willing to give it a shot.

While some books relating to issues like those addressed here may be 'preachy', this one doesn't fall into that category at all. It tells it like it is and provides hope for those encountering this in the future.

I thoroughly enjoyed it.

I knew I was in love with Verona Cove on the first day, but I waited until the seventeenth day to commit. After one week here, I'm carving my name into a tree in the center of town. It's way harder than you might think, digging a pocketknife into ancient bark. Eleven letters have taken me hours, or it felt like that, anyway. Fortunately, before the sun rises, no one polices Irving Park - or anywhere, really. I'm pretty sure the worst crime Verona Cove has ever seen is someone dropping a napkin. The napkin dropper tried to chase it, I bet, but the wind swept it up, and eventually, somewhere, the napkin became litter.

When We Collided by Emery Lord