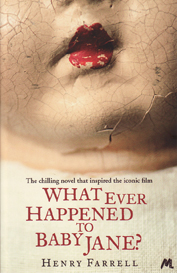 Mitch Douglas, the heir to Henry Farrell’s intellectual property, claims that What Ever Happened to Baby Jane? was a new kind of gothic horror; that Farrell had given birth to the ‘’psycho-biddy movie’’. This is probably accurate, given that the story has much in common with gothic horror, and that the movie chose to emphasise the more lurid aspects of the plot to the detriment of the more complex character and scene building the novel engages with. The plot is certainly reminiscent of scenes in gothic fiction; of helpless women imprisoned, much like Antonia in Lewis’s The Monk, of violence, and the depredations of human nature.

The movie, starring Bette Davis as Jane Hudson, the “baby Jane” of the title, and Joan Crawford as her sister, Blanche Hudson, was a hit in the sixties when it was released. The movie played off the reputations of the two actors, both now in the declining years of their careers, thereby mirroring, to an extent, the situation of the characters they play in the film. Baby Jane was a child star of the vaudeville era, soon forgotten as the world became transfixed by screen stars. But in her time, she was instrumental to her family’s fortunes, and a source of pain for her younger sister, Blanche, forced to live in her shadow throughout childhood. However, their fortunes changed. Blanche became a big movie star, signing a contract with the studios that assured her sister small roles in her films, but thereby unpinning the point that Jane was now dependent upon her sister’s star. This changed, however, when Blanche was injured in an accident that left her unable to walk.

The movie adaptation chose to focus on the animosity between the two sisters and highlight the violence between them. For this reason, I think the movie sensationalises the story, rather than faithfully captures its essence. I am not engaging here in a picky game of plot pedantry. There are differences in the plot, many of which make little difference to the story. In fact, on the whole, the plot is faithfully reproduced by the movie. Small differences like the role of the note Blanche attempts to get to Mrs Bates – when, and then what happens to it – for instance, don’t really matter. Even Edwin Flagg’s ignominious fate is not reproduced in the film, but the important thing is, he is given a raison d'etre, while Mrs Bates’s role is relegated somewhat to make him more relevant.

It is not the minutiae of plot detail that gives the movie a different tone. It is character portrayal. What gets left out of the movie are small and large details about character. Edwin Flagg, a thirty-something musician, single and still living with his mother, is faithfully drawn from the book. But his desire to leave his mother is not so explicit in the movie, and therefore the irony that he perceives Jane, a woman who reminds him so much of his mother, to be his ticket to freedom, is lost.

There is a scene at the beginning of the movie involving a caged bird. In an horrific twist, Jane kills Blanche’s pet bird and serves it to her for dinner. It’s a somewhat obvious metaphor – the caged bird is Blanche, and its fate does not bode well for her – but it successfully articulates for the audience what this movie is about. Like Blanche, Edwin is also a caged bird. However, I think the book suggests that Jane also is a caged bird (although no caged bird appears in the book – the metaphor is drawn from the movie). Bette Davis’s portrayal of the character focussed upon her vindictive, violent and malicious nature. There never seemed to be a moment of real doubt in her mind about what she was doing, other than moments of stress when she needed to act in her own interests. Her use of tainted food to terrorise her sister, her physically violence and her psychological torment painted her as having a Machiavellian and cruel nature.

However, this is not the tenor of the book, as a whole. I think her perceived cruelty in the book happens mostly in the first half, and Jane's murder of Edna Stitt, the housekeeper, is undertaken in a moment of panic for which she shows genuine remorse for the rest of the novel. There is no mistaking that Jane Hudson is mentally unhinged, but she has many moments of humanity, fear and weakness. She is not so much a Machiavellian, but something of a victim herself. This is most evident, I think, in the closing scene of the novel. She calls the police via a public phone to seek help for her sister – in the movie she is merely found – before being discovered as she makes her call. The scene recalls her earlier attempt to confess her crime to Edwin, only to be interrupted by the sound of her sister seeking help upstairs, thereby robbing her of the opportunity. More significant is the confession made by Blanche in the last scene. In the movie, this was portrayed as a feeble attempt by Blanche to allay Jane’s paranoia in the hope she might get help. In the book, we believe the confession and we see that to a large extent, Jane Hudson is a victim; of the exploitation she suffered as a child and the jealousy she caused her sister. She has lived a life of uncertain mental health, imprisoned by the circumstances of her sister’s injury and the loss of her career before her childhood was over. In my opinion, this is far more compelling story than that of the harpy portrayed in the movie.

To some extent – I can only speculate – I believe the movie was shaped by the presence of its two big stars. The side lining of Edwin’s personal tragedy, the marginalising of Mrs Bate’s character and the simplification of the two main characters, I think, helped emphasise the role of the two stars and their characters' gladiatorial kind of face off. Very marketable. According to Mitch Douglas, the two women hated each other in real life. It’s that kind of real life chemistry you can imagine studio executives wanting to capture on the screen.

In my opinion, the movie was great and deserves a modern audience. But there is a subtlety to the book the movie lacks and a frailty in the character of Jane Hudson that the movie mostly erases. For this reason, I think the book is still well-worth a read. 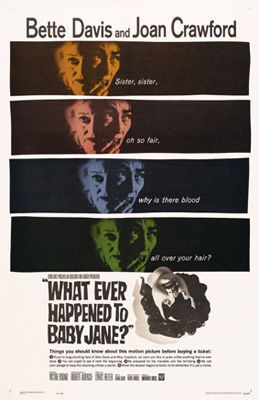 Whatever Happened to Baby Jane - The Movie
The poster from the 1960 film. Click on the poster to read about the movie on IMDb