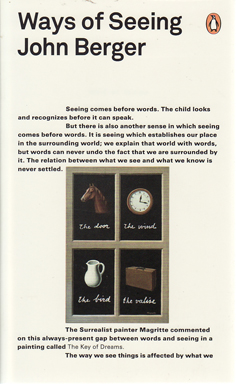 Last year when I heard of John Berger’s death, I was reminded of this little book I read when I was at university. The book had a big impact on me at the time, as it did the art establishment of the early seventies. For me the interest lay in its different perspective on art, as well as a means of understanding how women and men relate on the level of objects and consumers. I was opened to new ways of thinking. Ideas that seem to be common, or givens, at least in some sections of the community, now, were new to me then.

Having studied art at a high school level, and having taken some consolation in it during a poorly chosen business degree, soon to be abandoned, Berger offered a perspective not only on art, but my cynicism of capitalism and the commodification of workers. Berger broke with traditional art criticism and considered art, particularly traditional art to begin with, through the lens of commodity.

The book is divided into four written essay, interspersed with pictures, and three pictorial essays that combine traditional and modern images. The first essay lays the foundations of the book by relating how traditional ways of seeing were challenged by the invention of the camera and how it changed art. For instance, how cubism is inspired by the breakdown of the need for traditional representation, as well as the greater understanding of multiple perspectives the camera offered in the speed of its production.

Central to the entire book is the notion of art as a commodity. Berger links the dominance of oil paintings from the Renaissance on to the rise of capital and a desire to represent wealth and personal status. Berger argues that the medium of oil on canvas was the perfect vehicle for achieving a realistic representational medium that exhibited the power of ownership of objects and the representation of one’s place in the world.

The notion of object and commodity is further extended to consider the nude in art, particularly female nudes, which are overwhelmingly of the majority. The idea of the objectification of women seems commonplace now, but Berger was able to trace how the purpose of art was changed through this objectification, by implicitly placing a male gaze outside the painting’s frame. Berger extends this idea to the power roles represented not only in paintings, but in modern society through advertising and social ‘norms’; how not only women, but men are constructed sexually through a set of power relationships which, at the beginning of the 1970s when the book was written, seemed more entrenched and natural than now.

His final written essay on ’publicity’ is essentially about print advertising in newspapers and magazines. It is this section of the book which seems most dated to me now, given the change of communication technologies since 1972. However much of what Berger says about the manipulating strategy of advertising hasn’t changed, and in linking this to his discussion of more traditional art he has previously discussed, furthers his claim about art as a commodity.

I think the chapters about women and nudes would resonate most for a modern reader, and they still have the capability of challenging many conservative beliefs. However, the rest of the book is still interesting for the insight it gives into the purpose of art, and its ability to demystify stultified academic approaches to the subject. I will always count this book as personally influential. Worth a read.