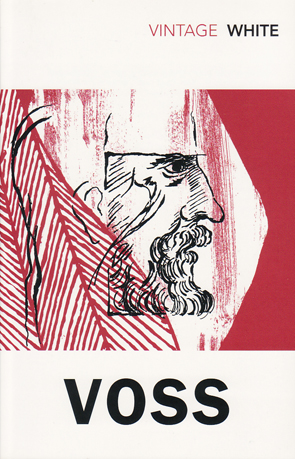 Johann Ulrich Voss, a German immigrant, leads an expedition into the interior of Australia. It is the 1840s and exploration of the continent is important to the European civilisation clinging to the eastern seaboard. It offers the potential for the country to be opened for further settlement and new economic opportunities. Voss leads six other Europeans, along with two Aborigines and a menagerie of farm animals, pack animals and supplies. Left behind in Potts Point, Sydney, is Mr Bonner, their primary investor, along with his household. Of note is Laura Trevelyan, a young woman adopted into the Bonner’s household who possesses an intellect superior to her peers. Laura has only spent a small amount of time in Voss’s presence prior to his departure, and not all of that has been a positive experience. She has found him to be proud and arrogant, yet at the same time the two make a connection without consciously realising it. As the days pass following Voss’s departure, each thinks of the other. Before Voss and his group set out from Jildra Station into the heart of the continent, Voss writes Laura a letter, asking for her hand in marriage.

Patrick White’s Voss is loosely based upon the last expedition of Friedrich Wilhelm Ludwig Leichhardt in 1848 when he attempted to traverse the Australian continent from east to west. Voss also borrows some of the known incidents from Leichhardt’s first successful expedition, such as the death of John Gilbert, Leichhardt’s ornithologist, which is closely echoed by the death of Voss’s ornithologist, Palfreyman, when he attempts to speak to Aborigines. Rumours that Leichhardt’s group was overtaken by Aborigines and their animals slaughtered in 1848 also finds a scene in White’s novel. However, Voss belies any notion that it represents a true or probable history. Instead, the focus of the story shifts back and forth between the fortunes of the expedition and the Bonner household. In what might be considered a somewhat alien trope for a modern secular audience, Voss and Laura form a psychic union, expressed through their dreams, through visions and sickly delusions, which draws each emotionally closer to the other, even if they become more physically separated as the novel progresses. In a letter to Laura Voss states:

So we are riding together across the plains, we sit together in this black night, I reach over and touch your cheek (not for the first time). You see that separation has brought us far, far closer … distance has united us thus closely. This is the true marriage.

The conceit raises the plot beyond a traditional adventure or love story. White’s landscape becomes mythic, a place of natural isolation, of harsh physical deprivation, and the love of the protagonists an expression of union approaching neo-Platonic ideals.

David Coad, a White scholar, has described White’s prose style as difficult and idiosyncratic, reflecting White’s alienation from a fifties culture he considered anti-intellectual, bookless, mindless drudgery based on the banal. I think Coad’s description is more likely to discourage potential readers rather than encourage, which would be a pity because White’s work is enjoyable on different levels. However, the fact remains that the relationship between Laura and Voss is ignited not on an emotional or passionate level, but as an intellectual response to the problem of divinity. Their main contact comes during a private moment at a party held prior to Voss’s departure. Their conversation is predicated upon the meaning of the Australian landscape and its transcendent possibilities. Voss, seemingly a mouthpiece for White at this point, reacts to Laura’s admission that she does not pray. The opening of the novel has already revealed her to be an atheist in all but name: a rationalist; sceptical; suffocated by the fuzz of faith. She perceives herself complete and therefore there was in consequence no necessity to duplicate her own image, unless in glass… God, created in the image of man, seems to have no reality for Laura. Voss demeans atheists because they themselves are so lacking in magnificence they cannot conceive the idea of a Divine Power. Laura counters that Voss has set aside a particularly Christian understanding of divinity and implicitly placed himself at the centre through his pride. Yet she, too, is proud of her own intellectual powers, and in Voss’s pride she meets her own reflection. Yet she believes Voss is in greater danger of spiritual destruction than herself. Voss replies:

Oh dear, I have caught you out doubly … You are an Apostle of Love masquerading as an atheist for some inquisitorial purpose of your own. My poor Miss Trevelyen! I shall be followed through the continent of Australia by your prayers, like little pieces of white paper. I can see them, torn-up paper, fluttering, now that I know for certain you are one of those who pray.

And this, surely, is the point. Voss awakens a spiritual need in Laura which is first manifested as a need for an equal, which Laura finds in Voss, who is imbued with spiritual significance by the Australian landscape in her imagination once he departs.

If White is a difficult writer at all I think the difficulty lies with his refusal of the banal, the mundane and profane. In a speech given by Tom Radclyffe, an army officer at the beginning of the novel, concerning the white civilisation’s place in the Australian landscape, he measures progress by the homes and public edifices that have been built, by the settling of the land and the food drawn from it. Radclyffe’s is a purely utilitarian view of the landscape. Laura and Voss’s relationship, on the other hand, while it may remain a mystery for some readers upon these same utilitarian grounds, hints at the transcendental landscape of the Australian bush, already imbued with the mysticism of the Aboriginal Dreamtime. The bush is transformative, denuding Voss’s party of their valuables, their livestock and their safe western values. Their relationship is achieved spiritually, echoing neo-Platonic ideas that informed Christianity, of the separation of the body and spirit.

Voss’s journey also recalls Christ’s temptation in the wilderness and Christ’s repudiation of the physical against the devil’s taunts (Man does not live on bread alone but on every word that comes from the mouth of God). If Voss does not believe in a Christian divinity particularly – White himself was uncomfortable with orthodox Christianity – he experiences a spiritual awakening on his journey which White characterises through Christian symbolism. Voss washes and tends to the sores of his men, and his death recalls the spear in the side of Christ while he hangs upon the cross. The Australian bush assumes the mythic potential of the old Western culture, while Voss is transformed into a mythic figure, himself; Christlike, with a Nietzschean drive to impose meaning upon the landscape (Your future is what you make of it. Future … is will.) At the heart of all this is the sense of a greater spiritual reality discoverable in the everyday world, although not accessible to all. Patrick White stated when asked why he wrote, that he wished to give professed unbelievers glimpses of their own unprofessed fate.

However, Voss, as a novel, is still highly accessible. It provides a fascinating reading experience, giving glimpses into nineteenth century mores, living conditions and characters. At the same time, it is structured and told as a fairly standard story. White establishes the connection between his characters and the world of Sydney early on, and then alternates between the landscape of Australia and the Bonner’s more domestic scene as one might expect. The novel is full of drama, scandal and situations which test the characters’ values, like any other. I say this because White’s reputation as a difficult writer and the aura of his Nobel Prize may put some readers off, but the novel is also an entertainment even if it makes White’s own religious struggles and interests the intellectual force behind the narrative. Reading the novel gives one a sense that there is meaning behind the ordinary; that our lives have a greater spiritual dimension and cosmic scale. For this reason, Voss is not only a great story but is also a great novel, as it gives an insight into that old-fashioned thing that connects us to a story as readers: humanity. 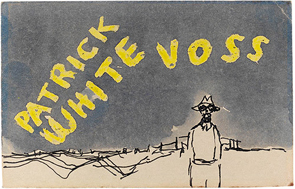 Original Cover
This is the cover created by famous Australian artist Sydney Nolan for the first edition of Voss. According to Parick White's biographer, David Marr, White was unhappy with Nolan's cover - he thought the artist was too busy on other projects - but accepted it on the basis that Nolan was a friend. 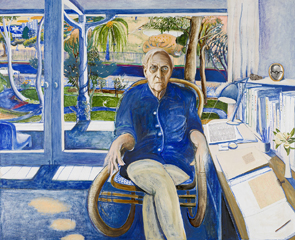 Portrait
This portrait of Patrick White was painted by another famous Australian artist friend of White, Brett Whitely. It was used for the cover of David Marr's biography on White.

For those interested in Patrick White's religious beliefs and their influence on his work, The Australian Broadcasting Corporation's site has a short article, Patrick White and unprofessed faith which may be a useful start.

Knowledge was never a matter of geography. Quite the reverse. It overflows all maps that exist. Perhaps true knowledge only comes of death by torture in the country of the mind.