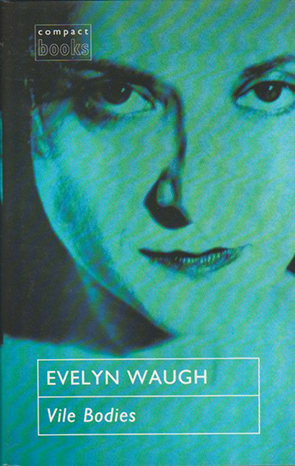 I returned to reading Evelyn Waugh after many years, without much thought about the novel I was selecting. Vile Bodies was a volume that had long languished on my shelf unread, a cheap copy I bought somewhere long ago, so when I finally took it down on a whim the other day, I might have thought twice about my choice had I realised that Decline and Fall, Waugh’s first published novel, preceded it. Readers of this review may wish to follow this advice, to read Decline and Fall first, while I will read it in the near future. Nevertheless, I didn’t feel the absence of that first volume as I read. Vile Bodies is a hilarious piece of satire on its own, tinged with the bitterness – a word Waugh himself uses to describe aspects of the novel in his preface – over the destructive forces shaping Europe between the World Wars.

Vile Bodies essentially captures the spirit of the ‘Bright Young Things’ of the late 1920s social set in England and dramatizes the decline of their moment. The Bright Young Things, or ‘Bright Young People’, as Waugh chooses to call them, were the forerunners of what we, today, might call celebrities, along with the newspaper press that followed their exploits at that time, much like the paparazzi now. They were social elites, born to wealth or position, whose exploits in the pursuit of fun caught the attention of the public. Their parties and treasure hunts were widely reported in the news, while their fashions and their tendency to flout traditional behavioural mores and values was somewhat shocking. Their numbers included not only the social elite, but writers like Evelyn Waugh, who describes himself as “rather on the fringe than in the centre” of that social set, and Nancy Mitford, who is thought to have based her character, Cedric in Love in a Cold Climate, on Stephen Tennant, one of the leading personalities of the time. Tennant was born to a titled family but spent much of his time in bed and sometimes wore androgynous clothes. Typical of the Bright Young Things, Tennant was born in 1906: too young to have served in the Great War, but coming of age in England after the end of the war, as a generation reacting against a world that had produced the slaughter, and its values.

The plot of Waugh’s novel mostly follows Adam Fenwick-Symes. Returning to England in a channel crossing, the manuscript of his autobiography is seized by customs, leaving him with no means to meet his publisher’s deadline. Forced to forego his publisher’s advance and to sign a second exploitative contract for another dozen books that will make him barely any money, Adam realises that his marriage to Nina Blount is now financially untenable. Nina’s response to this news – “Adam, you are a bore” – seems flippant, providing us with a clue to her character and the airiness of her group. The story takes us through a series of on again / off again marriage scenarios as Adam struggles to find some way to become financially viable for Nina. This includes debasing himself, at Nina’s suggestion, by travelling to her father’s estate, Doubting, to ask for money, by taking up the position of a society reporter for the Daily Excess, and by entrusting a £1000 he happens to win on a bet, to a drunk major whom he has never previously met, to wager on a sure-thing horse. Naturally, the major disappears with the money, although Adam will catch up with him several times throughout the novel: except we are never really certain whether the major’s enthusiastic assertions that he has Adam’s winnings are true, and that he might provide a happy denouement for Adam and Nina, or whether they are just the evasions of a con artist.

The comedic tone of Vile Bodies is quintessentially English, with situations recalling Wodehouse, and its farce reminiscent of scenes from Restoration comedy. Colonel Blount, with his bluff English manner and inability to remember or understand anything of importance, is a stock character bound to thwart Adam’s best hopes and provide comedic confusion. Miss Agatha Runcible, one of the members of the young social set, seems bound to fall from one compromising position to another, and is too facile to see the destructive path on which she has set herself. Mrs Ape, with her retinue of ‘angels’ – a group of young women she has assembled as a choir – is determined to impose her religious dogma on anyone she can intimidate into listening, and bear away their money for the privilege of salvation. Her name, recalling the controversy that raged around Darwinism – humans evolving from apes – is typical of Waugh’s farcical nomenclature: Miles Malpractice, Lady Throbbing, Lottie Crump, Lady Circumference.

The comedy works, but it is not merely entertaining. Waugh, while obviously familiar with the society of the time, is far enough removed from it, as he suggests in his preface, that he can focus not upon the social milieu of his characters, but its historical moment. The Right Honourable Walter Outrage, M.P, last week’s Prime Minister, while farcical himself, expresses his exasperation with the younger generation in the second half of the novel, which is darker and bitterer than the bright first half:

They had a chance after the war that no generation has ever had. There was a whole civilization to be saved and remade – and all they seem to want to do is to play the fool . . . there’s something wanton about these young people today.

Don’t you think . . . that perhaps it is all in some way historical? I don’t think people ever want to lose their faith either in religion or anything else. I know very few young people, but it seems to me that they are all possessed with an almost fatal hunger for permanence.

Waugh refuses merely to lampoon the Bright Young Things for their vacuous behaviour, which would be the intention of a conservative reactionary novel, but attempts to understand the tenor of the period within its historical context. Father Rothschild predicts another war to come:

. . . there is a radical instability in our whole world-order, and soon we shall all be walking into the jaws of destruction again, protesting our pacific intentions.

It is this contextualising that makes Vile Bodies such an interesting novel. It is not really giving anything away to reveal that a major war does break out by the end of the novel, yet Waugh published Vile Bodies in 1930, three years before Hitler became Chancellor of Germany. While this may seem prescient, Waugh was really identifying an anxiety that belied 1920s society: the social impact of the First World War, as well as the tensions that the resolution of the war had left, with a feeling that another major war was inevitable.

For this reason, when reading Vile Bodies we should not only see it as a satire of the Bright Young Things, but as a response to the tensions between the generations. The Bright Young Things may “play the fool”, but the older generation, represented by the likes of Colonel Blount, are not much better. Blount is disconnected from the reality of his moment because he cannot remember or properly understand, miring his judgment in the bluff certainties of a Victorian militaristic world view. Meanwhile, Adam bends reality in his newspaper column, creating characters with entirely fictional histories that take on a life of their own, because his society readers are determined to have been seen with them and claim to know them. And while it appears that Adam has foolishly handed over £1000 pounds to a major whom he has never before met, the Colonel is similarly tricked into investing in a religious movie about John Wesley, filmed in the grounds of his property, with dubious historical credentials and even more dubious production values. What seems evident as the novel winds down to its denouement, is that traditional social values become more fluid and negotiable in the context of a looming war. The old world has produced horror and the new generation is searching for its own path, even if their outcomes can also be somewhat disastrous.

I think this tells us something about the title Waugh chose for his novel. The response to the war, which left bodies of young men strewn across Europe, is naturally one of horror and a desire to make some sense of it. But the Bright Young Things have missed that historical moment and instead face their own: not of horrific battles, at least not yet, but of an endless succession of parties and meaningless society that may equally engender a desire for meaning and purpose. After all, it is Adam’s response to this permissive society of endless partying – “. . . Russian parties, Circus parties, parties where one had to dress as somebody else, almost naked parties in St John’s Wood, parties in flats and studios and houses and ships . . . ” – that provokes his feeling of disgust, not the war: “all that succession and repetition of massed humanity . . . . Those vile bodies.”

If Waugh had written this book when he was older – during or after World War II – he could not have written the same novel. Vile Bodies is a novel that captures an historical moment, and the uncertainties it expresses could not have been expressed by an older writer who knew what was to follow. The war that ends the novel is not a simple prediction, but an expression of the historical uncertainties of the period, as well as an expression of the tension between an older generation, and a younger generation reacting to its values. For modern readers, the book is interesting as an insight into this moment in time, but it can also reflect our own sense of change and threat. We still live in a world in which the role of young people and their challenges to sexual conservativism play a part in how society progresses. In the 1920s Miss Runcible is derided and scoffed for wearing trousers. In the 2020s gender politics continue to be the nexus of political debate between conservative and progressive parties. And like the Bright Young Things of the 1920s, we still live in a world in which the world order may produce a terrible conflict again, larger, even than the current conflict in Ukraine. If you read Vile Bodies from that perspective, it may seem, past its style and setting, entirely contemporary.

This video is a trailer for Bright Young Things, a 2003 film written and directed by Stephen Fry, based on Vile Bodies by Evelyn Waugh.
Widget is loading comments... 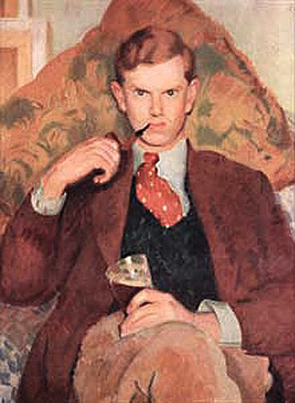 Evelyn Waugh, 1930
This oil portrait of Waugh by Henry Lamb was painted in 1930, the year Waugh published Vile Bodies. It captures Waugh as a younger man, suggesting a confidence and precociousness of personality that is lacking in many photographs, especially as Waugh got older. 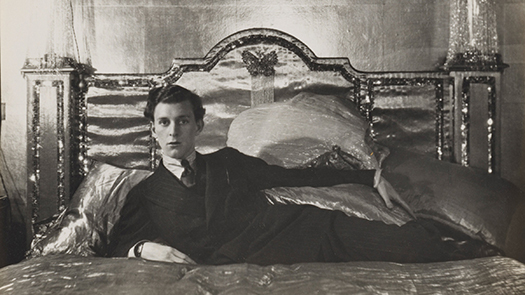 Stephen Tennant
Stephen Tennant was the youngest son of the Earl of Glenconnor, born in 1906. His behavior was considered outrageous, as were his clothes. He spent a lot of time in bed and dressed androgenously. He came to typify the Bright Young Things of the 1920s.

The Bright Young Things
This photo, taken in 1930, the year Vile Bodies was published, shows a group of the Bright Young Things after they have left a Mozart-themed party. Coming across some road works, they posed for this photo. All were well-known personalities at the time, including Cecil Beaton, a fashion photographer, holding the pneumatic drill.