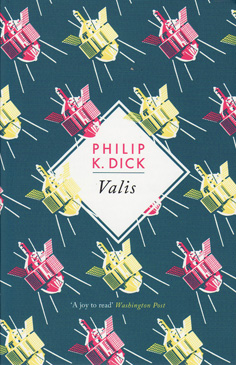 By the time I finished reading this book I wasn’t sure what kind of ‘reality’ was meant to lay beneath the narrative. Valis is a mess, a hybrid book that is philosophical, religious and science fiction, all happening at once. And make no mistake. The problem here isn’t a desire to pin a genre tag to this book. By the end, all you can really be sure is that the narrator doesn’t have a firm grip on reality.

This realisation is heightened by the knowledge that the narrator is a fictionalised version of Philip K. Dick, himself. Although not too fictional. Dick makes references to several of his own books throughout the text, his character friends refer to his books and people he knows in Hollywood. And it appears, from the author information at the back of my copy, that this novel was one of several novels Dick wrote as he tried to cope with a ‘breakdown’ he suffered in March 1974; the exact month Dick’s narrator suffers a breakdown.

The narrative voice is further complicated by the fact that Philip K. Dick narrates much of the novel through his alter ego, Horselover Fat, a man who appears to be a figment of his deranged imagination, yet seems to work independently of him in the real world in different parts of the book.

What caused this mental collapse? Several reasons are given: the breakup with his wife; the attempted suicide of a friend; the death of another friend to cancer. But most curious, and most relevant to the story, is the pink beam of light Horselover/Phil has fired in to his eyes in March 1974, giving him access to all sorts of information he couldn’t possibly have known. Where did it come from? What was it exactly? He doesn’t know. But the event sets off a philosophical and religious search as he writes a 300,000 word exegeses on God and Gnosticism, tied together through interfaith references and mythical allusions. Horselover’s (Phil’s) theorising is a messy hodgepodge of beliefs, suppositions and theorising.

For this reason the book seemed to be more a product of the counter culture of the sixties and seventies than inspired by traditional science fiction concerns. This is a book related to the drug experimentations of the period, the hallucinations that that engendered, as well as the willingness to embrace alternative systems of thought in a blend of east and west, modern and ancient, that at least made some sense of the assertion in the novel, more reminiscent of sci-fi writing, that time doesn’t exist.

At this point I was thinking that this was a very different kind of book than any other Dick book I have read. This didn’t feel like Science Fiction. It was about mental illness and a religious search.

Then, enter VALIS. Valis is an acronym for ‘Vast Active Living Intelligence System’. It’s at this point that the plot takes a turn via a most unlikely means, a Hollywood film. Horselover’s complex system of beliefs seem to be confirmed through the likely presence of Valis, and his friends begin to believe as well, leading them on a quest that might just bring them face to face with the meaning of everything.

It’s hard to say much more about the book beyond this without risking giving things away to anyone who is interested. All I can say is that I found the book very uneven. At times I was fascinated, at other times bored. The story takes quite a while to get going, and I would count myself as a fairly patient reader. Sometimes the narrative flows well, but then it gets bogged down in religious exegesis. As someone who finds religious proselytising a little creepy, this was a bit tedious, and made more so because I felt Dick never really revealed the true significance he placed on this aspect of the story. As someone a religious person would call an atheist, I had no choice but to accept some of this for the sake of the story, and any dismissal Dick/Horselover makes of the system of belief he advocates is small and questionable.

In the end, the one thing I felt I could be sure of, was the constant refrain of the book; that the universe is irrational, as much as the characters and much of the narrative in the book is. I would recommend much of Philip K. Dick’s writing to anyone looking for older science fiction, but I feel that this book would try the patience of many people.