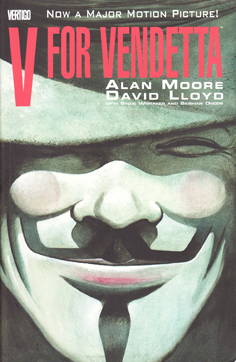 V for Vendetta tells a story of a dark and oppressive society. A world ravaged by nuclear war where England is ruled by a fascist regime with total control over citizens. Into this world comes V, a mysterious figure who at first seems to be on a personal vendetta against people who have harmed him in the past. Gradually we find out that V's plans are much more elaborate than that. It's a morally ambiguous story with an extremely ruthless main character.

The story was written when Thatcher was the Prime Minister in the UK, at the end of the Cold War when nuclear war between the superpowers was still a scary possibility. And it is still relevant today, when we once again afraid that we will wake up to find that the US and North Korea have decided to launch nuclear attacks at other, and where minority groups such as the LBGT community still fear for their safety. It isn't hard to imagine with the nationalism sweeping many parts of the world that the world of V is a real possibility. A slogan used in the story is Make Britain Great Again, a nationalistic sentiment now associated with the Trump election campaign.

A major part of the story is that we never find out who V is. The only identifying feature we have of him is the Guy Fawkes mask he wears. As V says at one point, there's no flesh or blood within this cloak to kill. There's only an idea. Ideas are bulletproof. Evey finally comes to realise the importance of the idea of V when near the end she takes a mask and assumes the role. And in the final frames she seems to be introducing Stone to the shadow gallery and to the world of V's rebellion in the same manner that she was introduced to it. No matter what happens in response to Evey's final actions, V will continue. Who V is is not important. What is important is what V is.

Today Anonymous have taken up the use of the Guy Fawkes mask as a symbol in their protest actions. Part of their campaign involves the release of videos, similar to the ones V uses. Perhaps when Anonymous was formed, they had that thought in mind, that ideas are bulletproof, although their form of action is mostly through cyber-attacks and the use of data rather than physical violence and destruction.

One thing I really liked about this book was the way you gradually find out just how much V is able to manipulate the other characters. There is a scene where V and Evey are discussing the roses he has growing, and she asks if there is a rose for the Leader. V replies Oh no, not here. For him I've cultivated a most special rose, and you realise that what seemed to be a side plot was actually set up by V all along. One thing I noticed when I went back over the book quickly was how many subtle references there are to V in scenes that do not include him, such as his shadow drawn to side. This adds to the feeling that he is always there, controlling everyone.

This is only the second graphic novel I've read, so I don't have a huge experience in judging the quality of them. The story is brilliantly told, but I think the print quality of my edition doesn't live up to the content. The paper feels cheap and the printing doesn't look great. This is a pity because I loved the illustrations themselves. There is a darkness to them, a harshness that matches the story.