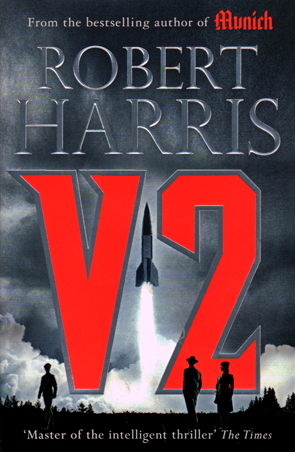 I feel myself inwardly groan whenever I watch a movie that concludes with a hero and heroine getting it together as the end credits are about to role. I’m not talking about the kind of movie where you’ve watched the relationship develop or you understand that experiences – “relationships that start under intense circumstances” to quote Annie (Sandra Bullock) from Speed) – have brought our pair together in the intensity of the moment. I’m talking about the kind of get-together that’s done with a because-the-studio-says-it-has-to-end-this-way shrug, and you think, wow, it’s on, but why? Oh, the credits. Because the way things end is important. In film and literature, we have an expectation that this is what everything has been leading up to; the denouement of all that has preceded this moment.

Anyway, I digress before I even start.

Richard Harris’s V2 is historical fiction set in the fading months of World War II. The German army has been repulsed at Stalingrad, the Luftwaffe has been all but blown out of the skies and the best Germany can do is rain terror upon England with its V2 rockets. Most readers will be familiar with the V2 rocket program to some degree because the V2 was designed by German engineers and scientists who were head hunted at the end of World War II by the allies. They traded their expertise and knowledge for new lives after the war. The Russian and American missile programs of the Cold War drew from that expertise, along with the rocket program that led to the Saturn V which launched Apollo 11 to the moon in 1969.

Harris blends his fictional account of the V2 launches with real people and incidents of the period. He explains in his Acknowledgements that he based his book on the experiences of Eileen Younghusband, who was stationed at Mechelen, Belgium, attempting to calculate the trajectory of V2 rockets launched at Britain so that an attempt could be made to destroy the mobile launch sites before they were moved. Kay Caton-Walsh of the Women’s Auxiliary Air Force is her fictional counterpart in V2.

Then there is Dr Rudi Graf, another entirely fictional character: an engineer responsible for overseeing the V2 launches. The V2 rocket was cutting-edge technology for the time, but it was experimental and many of the rockets failed to launch properly and none of them were accurate enough to ever hit prize targets like the Houses of Parliament in London. If they hit within five kilometres of their target it was considered a successful flight. Graf is primarily responsible for the launches at Scheveningen, but he has another worry as the story opens. Pressure is on to launch more V2s each day, despite their unreliability, and Sturmscharführer Biwarck of the National Socialist Leadership Office has been sent to oversee the work being conducted at the base. Under his prying eyes, and subjected to the presence of his intimidating notebook, Graf’s mind is constantly drawn back to an interrogation he suffered only months before, after a drunken party on a beach with Klaus Reidel, and the early days of the V2 program at Peenemünde. Reidel was a real historical scientist from Peenemünde, and Graf inadvisably expresses the opinion the war was lost, the rocket would not save Germany, and of course, someone at the beach writes the whole conversation down, leading to his interrogation. For Graf, the real work in rocketry is to devise a means to fly to the moon. Before the war he and Wernher Von Braun had helped establish The Society for Space Travel, inspired by Fritz Lang’s Woman in the Moon. This is the noble mission which Graf feels has been hijacked by the money of the Third Reich. Graf’s heart is not in the war.

Meanwhile, Kay begins her story as a photographic interpreter, examining aerial shots of enemy targets through a stereoscopic magnifier, to determine changes in enemy activity. Harris’s development of Kay’s character is somewhat limited. Kay is having an affair with Mike Templeton, an Air Commodore, in her opening chapter, when a V2 rocket almost kills them both and leaves Kay exposed to the suspicious eye of Mike’s wife in a meeting she attends at the request of her section leader, Wing Commander Leslie Starr, who seems to want to run his hands about her a lot. What else do we learn of a personal nature about 24-year-old Kay? We learn she lost her virginity with a reconnaissance pilot, her only other lover prior to Mike. Later, she’ll fall into a brief relationship with her billet’s son, Arnauld, in Mechelen, discovering that she was that sort of girl after all. Kay is defined by her work or sexuality. When Kay walks through Mechelen with her co-worker, Barbara, they attract wolf-whistles. Barbara meets Jens Thys at a bar Arnauld takes them to, a liaison that is to ruin her career. Kay feels she almost comes close to ending her own career, also, with her brief relationship with Arnauld. But don’t be curious about Kay’s family, her school friends, or any other achievement prior to the war. Kay is either a woman determined to do her bit for the war, or she is sexually available.

Harris alternates chapters between these two main characters. Harris’s subject, naturally, is fascinating, but his writing is pedestrian, like a shiny rock determined to skip above the depths of its subject matter. Harris is writing for a mass audience and there is nothing to enliven his writing. Sometimes, I felt I wanted to look beyond the surface of that deep pond. Sure, through Kay’s story we are given some understanding of how radar was used to detect the launch of V2s, and how attempts were made to calculate the location of launch sites based upon the location of impacts in England. But Harris has chosen to keep the narrative moving rather than delve to deeply.

However, there is more background detail for Graf, making him a more realised character. We are fed, bit by bit, Graf’s memories of Peenemünde that now haunt him. Peenemünde was a rocket development site that Wernher von Braun established with the help of military funds in 1937. Peenemünde was attacked in August 1943, only two months before this story begins, and Graf cannot let go of the memory of the loss of Karin, his lover, or the death of Dr Walter Thiel and his family, another real character from history, whose research helped develop the V2. And his relationship with Wernher von Braun, the real historical head of the V2 program, suggests he is more submissive but also idealistic.

V2’s historical basis is served well enough for a general audience looking for a light read. Harris has integrated key historical figures seamlessly into the narrative and creates a tense standoff as Graf increasingly questions the command of SS-General Hans Kemmler, a man too willing to sacrifice others for the cause, and his own attempts to make amends for his part in the program. What is less successful is Kay’s narrative, which is not driven by the moral quandaries that are a feature of Graf’s story. When Graf captures Femke, a young girl removing parts from a launch site, we understand his decision to let her go is influenced by the memory of his loss of Karin and an understanding about the nature of his superiors: they would kill Femke if he turns her in. But Kay has little to do in her story, except her job and accidentally discovering the whereabouts of a German soldier. It’s a less compelling narrative that never quite lives up to its potential, even when Mechelen becomes the target of retaliatory V2 strike. Instead, the alternating chapters – Graf’s now Kay’s, now Graf’s and so on – become shorter, the pace quickens, until suddenly, the war is over, the credits are rolling, and Graf’s post-war plans zero in on our heroine with far more accuracy than any V2 ever approached London. Is that really what this was about? I mean, really?

Harris’s novel is based on fascinating history and weaves fiction and historical fact well. But it is lacklustre in its bland delivery and leaves the reader wanting to know more, both about its subject matter and its characters. 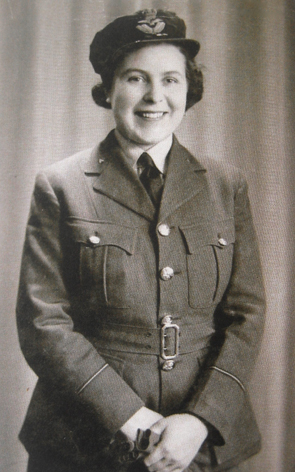 Eileen Younghusband
Kay Caton-Walsh and her story of involvement at Mechelen to attempt to calculate the location of V2 launch sites was inspired by Eileen Younghusband's obituary in The Times on 5 September 2016, and her two accounts of her role in the war, Not an Ordinary Life (2009) and One Woman's War (2011) 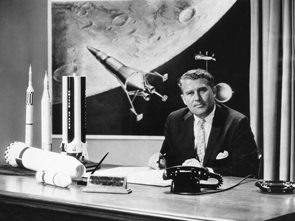 Werner von Braun
Wernher von Braun appears in V2 as Graf's friend. He was an early developer of the V2 rocket. He joined the Nazi party during the war and was head of the V2 rocket program. After the war he moved to America and joined NASA. He was to become head NASA’s Marshall Space Flight Center and was instrumental in developing the Saturn V which launched the Apollo missions. 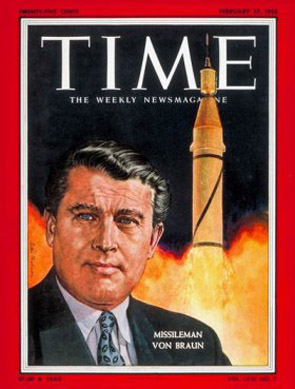 TIME February 17, 1958
By 1958, Wernher von Braun's adoption by America and his role in the American Space Program seemed complete. But in this edition of TIME magazine, TIME suggested von Braun's transfer of loyalty from Nazi Germany to the U.S. seemed to come too fast, too easy. 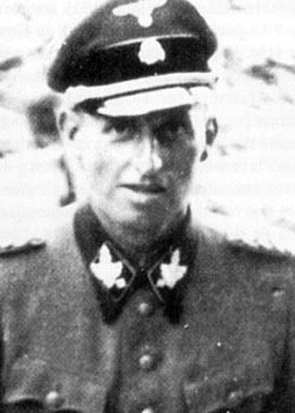 SS-General Hans Kammler
Kammler was the SS general in charge of the V-weapons offensive: by common consent, a madman - V2, page 119 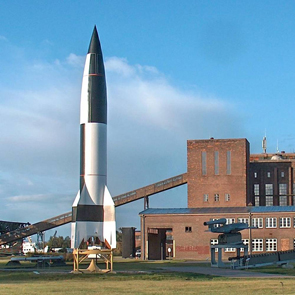 V2 Replica
This V2 replica stands in the grounds of the Peenemünde Museum, giving a good sense of the size of the rockets 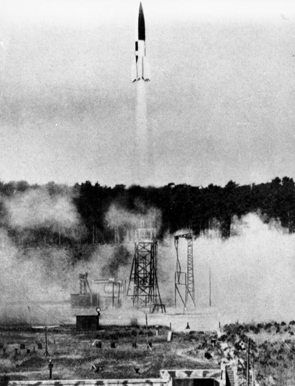 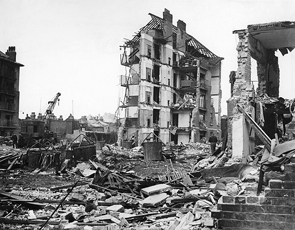 V2 Damage in London
While the V2 program was strategically of no significance, it effectively struck fear into Londoners. No V2 hit any target of significance to government or the war effort, but thousands lost their homes through V2 strikes. This photo shows the damage to flats caused by one of the last V2 rockets to fall upon London. After the war there was a housing shortage as a result of V2 strikes. Nevertheless, the V2 program was wasteful of resources and cost the German economy dollar for dollar more than the Manhattan Project cost the Americans.

There was a debate both during and after the war about which was the more frightening: the V1, the pilotless drone bomb, which you could see and hear, and which would only start to fall once its fuel ran out, potentially giving you time in the silence to try to find cover: or the V2, which struck without warning. Most said the V2. It preyed on one’s nerves just as much as the V1 but offered not even a chance of escape. And it was also eerily futuristic – the harbinger of a new era, produced by an enemy who was supposed to be beaten. It made you wonder what else Hitler might have up his sleeve.