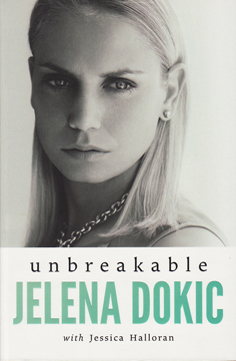 Back in 1995 I was teaching at Fairfield High School when I met a shy, quiet little girl by the name of Jelena Dokic. She had only just arrived from Yugoslavia the previous year, when she started at the primary school across the road. It didn't take long until she was well known around the school for her tennis prowess, and should I say, her father was also well known.

She never wore school uniform. The school was told by her father that she had to always wear her sponsorship clothing. Her father had a way with words. None of the staff would take him on. We all knew he had that ... potential. I had been told, just give him anything he wants: early passes; leave; whatever he wants.

But as for Jelena, you couldn't meet a more pleasant girl when she first arrived. Though I know that she didn't haven't a lot of friends, and the whole sportswear thing probably didn't help her fit in.

So, having her at our school, and knowing her all those years ago was the impetus for me reading this book. In her earlier tennis career, I followed her rise and fall carefully. So, for me, many of the details about her father's altercations with tennis coaches, staff and the public, I already knew. Back then, these times were much publicised in the press, too often overshadowing and obviously impacting deeply on the young Jelena. It would take someone with their head in the sand not to realise she was having a difficult time, but with Jelena wearing her sponsored track suits to school all the time and days absent supposedly due to training, no school staff were actually aware of the physical abuse she was constantly receiving. Added to this, in order to survive, she never admitted this to anyone.

This book reveals her whole story, from her arrival as an eleven-year-old, barely able to speak a word of English, her constant tennis schedules and the dominance of her father, who, the book records, bled her of all the money she earnt, right through to 2011, when, in her late twenties, she gave up professional tennis playing. Many of the situations she was put in as a child made life for her pretty impossible, including having to sack coaches herself, just because her father didn’t like them, to constantly being verbally abused, even when she won matches. She signed all her finances to her father, while at times she starved or was basically homeless.

I remember distinctly watching her Australian Open match when she renounced Australia to play for Yugoslavia, and how the crowd turned on her. It brought me to tears, knowing at the time that again, the ‘tennis dad from hell’ must be behind it. But as the book explains, Jelena could never reveal this. She covered up for her father to keep the peace and avoid being literally beaten. And it wasn’t until about the age of nineteen that she made her break with her father, even though she still often felt overshadowed by him.

Parts of the book had me in tears, knowing that she endured this for so long, and nothing was able to be done. Jelena had an inner strength far greater than most people. She wanted to save her mother, brother and herself from her father’s torment and overbearing nature. Without being in her shoes, it's easy for others to say that she should have revealed the situation, but she played the cards the way she thought best.

Luckily, there is an upside to this story. The last few chapters of the book give hope that she has met someone who loves and cares for her and that she hopes to spend her future with.

A fellow teaching colleague met her at her book launch recently. Physically, she has put on weight, but then who wouldn't, not doing the gruelling schedule she was back then? However, she is now happier than she's been for years. I hope that she keeps her links with tennis and that her life will now take the turn she wants.

The book is a well written, easy read, and I read it pretty much straight through within a few days. How a parent can put a child through the emotional and physical abuse that Jelena went through, is, to me, unimaginable. I guess I was very lucky growing up, for I don't think I'd have remained as, the title says, unbreakable.