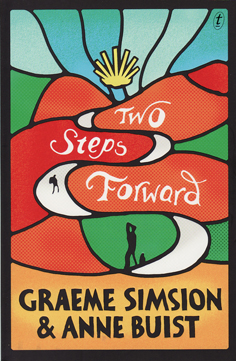 When I received this book as a present, I knew nothing about it, except that it was co-written by one of the authors whose books I enjoyed immensely, Graeme Simsion, author of the Rosie Project books. I wondered about the idea of co-authors for a novel, something I must admit I had never really come across before, but as I started to read, I realised how it had been done.

The story is written from the point of view of two characters, Martin and Zoe, each written by Graeme Simsion and Anne Buist respectively, themselves husband and wife. Martin is a designer of a buggy used over difficult terrains and sets forth to test his trolley while embarking on a trip of a lifetime. Zoe, an artist at heart, has heard about this trip and also needs to clear her head, though initially she doesn’t intend for this to be the way to go about it.

Zoe and Martin have both had major upheavals in their life, and for varying reasons decide to walk the Camino. Now, I am a geographer and I knew nothing of the Camino prior to reading this novel. The Camino is a walk from Cluny in France to Santiago in Spain, a distance of two thousand kilometres, a true pilgrimage and certainly not for the faint-hearted. Both Zoe and Martin decide they need to find themselves, and initially decide to go it alone. In the process they meet up not only with each other but with a number of other characters, some over and over, and have a variety of different encounters along the way with ongoing acquaintances. Along the way they both also receive revelations that test their resolve to continue their walk and have them further question their life, the universe and everything.

The story, based on this ‘pilgrimage’, is meant to have religious overtones, and although there are certainly spiritual aspects, what the pilgrims learn along the way is not always what you expect.

It gives a very vivid picture of the difficulties they encounter along the way: the terrain, the difficulty in getting lodgings and food, as well as sometimes compromising what they believe in for the greater good.

While reading this I learned that some past acquaintances of mine are currently doing this very pilgrimage, and have been documenting it via Facebook along the way. I am following that journey with interest also. While my friends’ journey may have a more religious overtone than that of Martin and Zoe’s, I can see some similarities. While this is a work of fiction, the authors note that it is based on their two walks in 2011 and 2016, both taking almost three months to complete.

At first, I thought this book was quite serious, along with the two main characters whose lives alternate and intertwine via chapters throughout the book, but it had some lighter moments and indeed some funny situations, as well as – for me, anyway – some teary scenes near the end.

At first, I thought the book a little hard to get into and a bit preachy, but not far into it I got over that and sat back to finish it overnight. I found myself empathising with a number of the characters, but certainly the main two. Both sometimes jump to conclusions and do not understand a situation before making judgements. An old saying kept coming back to me about being nice to people, because you never know what others are going through, and it certainly is true.

My thoughts about this book improved as I went on and I gave it 4.5 stars in the end. It certainly gave me a few things to think about along the way – perhaps like my two friends who have attempted the Camino, minus the physical journey.

I can recommend Two Steps Forward as an uplifting book, as well as a bit of a travelogue, with some good hints for those who may want to attempt the pilgrimage in the future. It also encouraged me to research the trip – a long and gruelling one, certainly fascinating – though with my bad knee, this kind of pilgrimage would never be something I could see myself attempting.