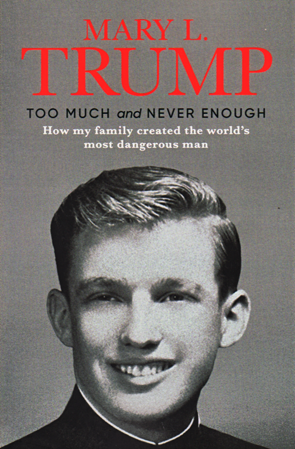 Too Much and Never Enough
Mary L. Trump

How my family created the world's most dangerous man

Early in Donald Trump’s life his mother, Mary, was forced to undergo an emergency hysterectomy and developed osteoporosis as a result of the sudden drop in oestrogen levels in her body. While Mary would live until she was 88 years old, Mary L. Trump, Donald Trump’s niece and author of Too Much and Never Enough, identifies this family crisis as a formative period in Donald Trump’s development. Susceptible to fractured bones, his mother would necessarily have a smaller influence on the lives of her five children for some time to come. Fredrick Trump, Donald’s father, was already a successful business man, and true to the attitudes of the time concerning sex roles and his commitment to his business which consumed him, he provided a strong financial bedrock for his family while neglecting the emotional needs of his wife and children.

This set of circumstances was the catalyst for the man Donald Trump was to become. According to Mary Trump, Fred Trump was a sociopath, which she characterises as lack of empathy, a facility for lying, an indifference to right and wrong, abusive behaviour, and a lack of interest in the rights of others. Far from stepping into the breach caused by his wife’s health, Fred Trump was a man who rebuffed his children, was angered by their needs and pitted them against one another. Fred Trump valued money and measured the worth of other people by the money they made. This covers a little of what Mary Trump asserts about her grandfather, but there is much more in her book.

The book was controversial before it was even published. It was subject to a restraining order by Donald Trump’s younger brother, Robert, but in the way that trying to ban any book never succeeds, the book has become a bestseller once the restraining order was overturned by the court. The justification for the restraining order has its roots in a suit against the Trump family by Mary and her brother, Frederick Crist, in 2000, concerning the terms of Fred Trump’s will, which cut them out of a share in the family fortune. It is central to the story Mary Trump tells about her family and the formation of Donald Trump. It is also material to the judgment one must inevitably make about Mary Trump’s motivations for writing the book and the credibility of its conclusions.

To start with, I have to say that I am not calling into question the conclusions Mary Trump makes about Donald Trump or the family that produced him. Her assessment of the President, for anyone concerned about his suitability for the job, will ring true: that he is intellectually deficient for the task; that he lacks curiosity; that he lacks empathy; that he is a narcissist concerned only for his own re-election; that he is easily manipulated by those from whom he seeks approval (Putin, Kim Jong-un); that his skill lies in self-promotion rather than any real material talent. And there are extra tidbits that were discussed in the media before most people got to read it: that Trump paid someone to take his SAT test, for instance. More damning is the scalpel Mary Trump takes to the myth of Trump’s success, a myth already dissected by the New York Times article of 2018, which accused Trump’s family of suspect tax schemes and portrayed Trump as a man reliant upon his father. Mary Trump, in the same vein as the New York Times story, portrays Trump as a failed businessman who was essentially propped up by his father’s successful business empire to the tune of hundreds of millions of dollars. Mary Trump paints her uncle as a man bereft of feeling, of talent, and any success which he can call his own. The fact that he could not even competently run casinos, along with his numerous bankruptcies, suggest his incompetence.

But those looking for a focussed expose of Trump and his dealings may be disappointed by this book. Mary Trump casts Donald Trump as a minor character in her family drama; even a victim of his own upbringing. Mary Trump’s relationship with her subject on the page is complex, but her focus is upon the environment that produced him and the values that shaped him. To this end her focus is largely upon her grandfather, Fred Trump, along with her own father, Freddy. Desiring to be a commercial airline pilot, Freddy is cast as the black sheep of the family, derided by Fred Trump, and his position in the family business diminished as a result of his desire for independence. It’s a sad tale of wasted opportunity and talent, alcoholism, physical and mental decline, and inevitable failure. Mary Trump lays the blame for her father’s downward trajectory at the feet of her grandfather. This is where the nexus between her stated aims and the tone of her book becomes interesting, and upon the authority with which it is written.

Mary Trump’s account of her uncle and their family has gained credibility because she is a clinical psychologist, and much of the early analysis of Donald Trump and his father is based upon clinical concepts couched in clinical language: sociopathy, for instance, or ‘mirroring’, the process through which an attuned parent reflects, processes, and then gives back to the baby the baby’s own feelings which is the root of empathy. Mary Trump derives the title of her book from a discussion of child development affected by too much or not enough: not enough positive feedback and mirroring as opposed to negative influences and expectations that might overwhelm a developing personality.

While Mary Trump’s assessment of her uncle may adopt the mantle of scientific veracity, there is also a degree to which one must be aware of her own motivations in writing the book. She speaks of her horror to discover that her uncle had won the presidency, and her despair over his actions upon taking office, particularly against refugees and Muslims. In her prologue she discusses the widening gap between her uncle’s limitations and the escalating challenges he faces and ends her opening, I can’t let him destroy my country. Yet there is also a sense as the narrative of her family unfolds, that the book is as much about personal vendetta as it is about the fate of her country. Mary Trump cannot speak about her father without the vituperative anger engendered by gross injustice which shows in her writing. If Fred Trump is the source of Donald Trump’s personality disorders, Freddy, her father, becomes one half of a dichotomy that might be characterised as sinners and saints. From his alcoholism which she blames upon Fred Trump, to the loss of his job and Fred’s unwillingness to trust him with a position of responsibility in the family business, Freddy’s story always feels like one side of a coin; always a sense that other aspects of the story might exist, untold. Mary Trump, having had to endure the early death of a father she obviously loves, also had to deal with being cut out of her grandfather’s will, a punitive settlement and family estrangement. When dealing with these issues her perspective never seems clinical or scientific.

And while Mary Trump may give voice to the many things I already believed about President, that cannot be the measure of the book. The book is uneven in tone, initially adopting a clinical approach which is eventually abandoned to the tones of a hurt daughter. Never is Mary Trump’s lack of objectivity more on display than in her closing summation of her uncle’s character:

I can only imagine the envy with which Donald watched Derek Chauvin’s casual cruelty and monstrous indifference as he murdered George Floyd; hands in his pockets, his insouciant gaze aimed at the camera. I can only imagine that Donald wishes it had been his knee on Floyd’s neck.

It is hardly a clinical assessment of her grandfather. It’s a statement that seems filled with a hatred similar to that which she attributes. I tend to write notes in my books as I go – just to help me find things or to quickly jot down a thought. When I read that, all I could think to write was, Whoa!!

Mary Trump’s book is valuable for the inside perspective it offers of a dysfunctional family, but those interested should understand that much of the book is about her father and his relationship with Mary’s grandfather. It’s an attempt to portray the environment which created Donald Trump, but it is a personal account, not the account of a detached clinician. 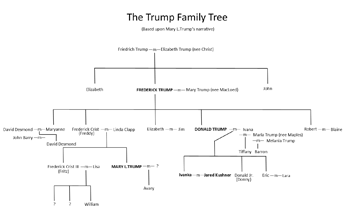 Click on the image to view a .pdf of the Trump family tree, based upon Mary L.Trump's narrative
Widget is loading comments... 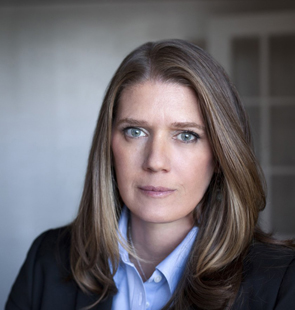 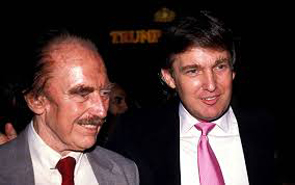 Donald Trump with his father, Fred
Fred Trump was a successful business man and made a fortune in construction and real estate. However, he was an emotionally detached father from whom Donald learned the value of money and success at all costs. Mary Trump describes Fred Trump as a sociopath. 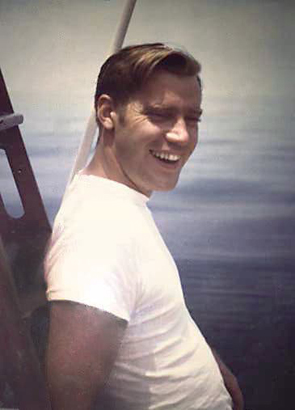 Freddy Trump
Freddy Trump was the eldest of Fred Trump's sons and was marked to take over the family business. But his interest in aviation and other pursuits discredited him in his father's eyes. Turning to alcohol, Freddy suffered professional failures and died at the age of forty-two.