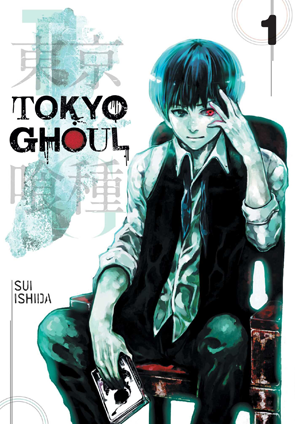 Tokyo Ghoul is the first manga I’ve read, and it did take me a few pages to get used to reading each page from right to left. Once I got past that, I found this to be an engrossing story, well told and with really great artwork. The art is all very dark and grim, very appropriate for the storyline. It is also very detailed, with detailed facial expressions clearly showing the emotions of the characters. At various time you can clearly feel the fear and the horror that the characters are experiencing.

The story is (strangely enough) set in Tokyo. Ghouls exist. We don’t really get much of an explanation of what ghouls are in this volume. That might come in later volumes. All we know initially is that they exist and that they attack and eat humans. We find out about ghouls through the eyes of an outsider, Ken Kaneki. Through a strange set of circumstances, he is critically injured in an accident that kills a ghoul who is attacking him. A doctor takes the unusual and highly unethical step of transplanting some organs from the ghoul (not knowing that it is a ghoul, they can disguise themselves to look like humans) into Kaneki. He becomes a half human/half ghoul hybrid.

Most of the chapters in this volume are about Kaneki realising what he has become and trying to come to terms with what it means. He no longer fits into the human world, but does not want to become part of the ghoul world, even if they will accept him, which looks doubtful at first. I feel I need to read more volumes to really get a feel for this story, as this volume ends with Kaneki being taken in by a group of ghouls who look like they will help him adapt and learn to control his hunger.

There are 14 volumes of the original story, with another 16 volumes in a sequel series and a single volume prequel. I get the feeling that this will be a morally ambiguous story, as it is obvious from the chapters I’ve read that ghouls cold bloodedly hunt down humans for food. As one ghoul explains to Kaneki, humans are nothing more than livestock and should be treated as humans treats cows and pigs. But at the same time, we find out that the only food that can sustain a ghoul is human flesh. They get sick if they attempt to eat anything else. So, is it really that bad for them to eat humans if that is what they need to survive? The group who take Kaneki in promise they can help him, and seem to have proved it by preventing him from eating his closest friend when he is desperate to feed, which indicates that ghouls are not uncontrollable monsters who feed without thought.

Like I said, I think I need to read more than just the first volume to get a good idea of this story, as it seems like I have only just started the journey. I enjoyed this first volume and will return to the series to learn more about the world of the ghouls and find out whether or not Kaneki can find out how to exist in that world without losing his human side. 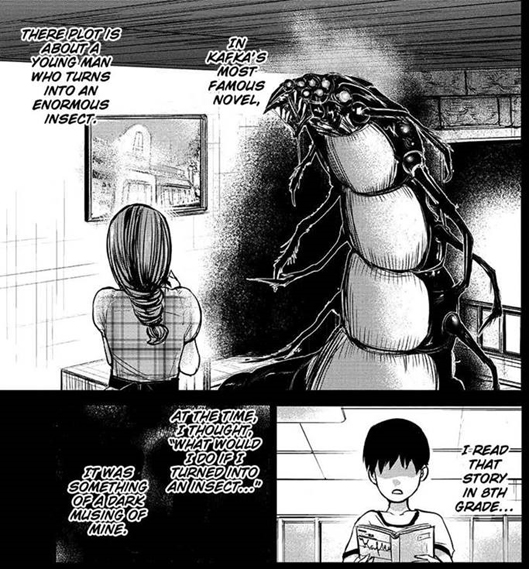 Kaneki compares himself to Gregor Samsa, the character in Kafka's Metamorphosis, who wakes one morning to find he has turned into cockroach.