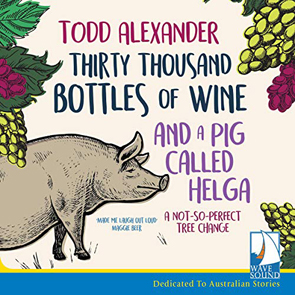 A Not So Perfect Tree Change

The appeal of a tree change is easy to understand. Who hasn’t fantasised about getting away from the rut of corporate routine? Sometimes we seem to get caught up in a whirlwind of routine tasks that increasing seem pointless. Throwing it all away and moving to the country could be the fix needed, giving a change in pace, a cleaner/healthier lifestyle, a community to join, and an affordable alternative to trying to live in a big city. You could connect with nature, remove your dependence on supermarkets by growing all your own food and embrace a cleaner lifestyle. It all sounds idyllic.

This is the idea Todd and Jeff had. Both had high-powered, great-paying corporate jobs, but both were increasingly frustrated by the life they were leading. They decided to leave Sydney for a small country property and run a B and B accommodation business.

They fell in love with a property that was somewhat larger than they initially had in mind, and somewhat more expensive than they had originally budgeted for. It also had a thousand olive trees and twelve hundred grape vines. Making wine and olive oil hadn’t been part of the original plan either. But hey, how hard can it be to make wine and olive oil? A lot harder and a lot more expensive than you might originally think, it turns out.

In fact, every part of Todd and Jeff’s new life turns out to be a lot harder and a lot more expensive than they had originally thought, and their problems with the errors they make learning how to do everything on the property, and their problems with money and financing their plans are chronicled in detail in this memoir. That is one of the things that I really liked about this book – Todd’s honesty in detailing the problems they had and how close they were to failure, to selling up and moving back to corporate jobs in Sydney. You watch shows like Escape to River Cottage and dream about one day finding your own place in the country where everything will be perfect. Todd doesn’t gloss over the harsh reality of just how hard following this type of dream can be.

But it’s not all gloomy stories about overrun budgets and unexpected expenses. Todd has a collection of anecdotes that tell of the joy both he and Jeff get every day from their new life. He also has a self-deprecating sense of humour which allows him to poke fun at himself, such as the embarrassing incident of the muddy hoof print left by a pig on his undies, discovered by his masseuse part way through a massage treatment. The masseuse assumes Todd has pooped his pants.

The only issue I really have with this book is that I felt disappointed at times when anecdotes were left incomplete. Todd starts to tell a story, we get the build-up, we get some of the resolution, but then he moves on to a new tale and leaves us hanging without a complete ending to first. I found this frustrating, and it happened many times in the book.

Overall, though, I enjoyed this light hearted memoir and would recommend it to anyone looking for an amusing read. I’d especially recommend it as a reality check for anyone contemplating a tree change – it’s not as easy the glossy Country Life magazine depicts.

I reviewed an audiobook version of this book. I recently picked up a physical copy of the book and glanced through it. There are a few differences which might make the physical book more appealing, even to a confirmed audiobook listener. First, the book has a section of photos in the middle. They show Todd and Jeff, views of the property, and the various animals who provide some memorable moments in the memoir. It’s always nice to look at glossy pictures.

The main difference however is the addition of a fairly substantial recipe section. Todd is a passionate cook and early in the book pokes fun at himself for his addiction to collecting cookbooks. Throughout the book he details his growing hesitation at eating animals and the reasons for his eventual conversion to veganism. The recipes he provides are all vegan, and I think are included to show his readers that it is still possible to enjoy good food without meat or other animal products. From a quick look over the recipes, he seems to provide a good range to try, from snacks and sides to full meals. This section provides a nice end to the book.