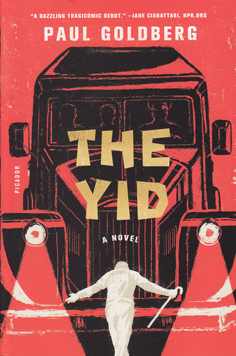 The Yid is set in February 1953, Russia. The date is specific because the story is based upon the death of Stalin only a few days later. The story centres upon a few characters whose lives have been affected by Stalin’s repressive regime. Now, it appears, Stalin’s government is making its own plans for a Jewish solution, with the arrival of many passenger and freight trains in Moscow to transport the Jewish population across the border, with the likelihood that the magnitude of such an operation will necessitate the death of many Jews, instead.

There are five main characters. There is Levinson, a former actor in Jewish theatre, who is visited in the middle of the night by three Russian police intent on taking him away. Lewis, related to Levinson by marriage, is an African-American welder who came to Russia with a belief in racial equality in the worker’s state. Moisey Semyonovich works as a chemist and has an association with Aleksandr Kogan, a Russian Jew who trained as a doctor during the Civil War. And Kima, a woman orphaned from an early age, whose parents disappeared after falling foul with the Russian state. When pushed to the extreme, and in the face of intelligence from Kima that Stalin plans to purge the Jewish population, the group forms a conspiracy to assassinate him.

There is a strange quality to the writing of this novel, giving both a strong sense of realism in its depiction of events, as well as a stage-like quality.

The realism comes, in part, from the layering of its characterisation. The history of the revolution and Civil war is layered throughout the book, but only in relation to the characters, whose backgrounds in these events we slowly come to know as they have been changed and moulded by their experiences: Levinson, who was deemed unfit for service in the war, nevertheless went on to a theatrical career that involved sweeping acrobatic gestures that have evolved into a formidable fighting style; Kima, damaged by the loss of her parents, is a fearless fighter and determinedly against the state; Lewis, who is defined too readily by his race against despite intellectual background and ideological leanings; and Kogan, a doctor easily framed in the context of state rumours about the depredations of Jewish doctors, who is left little choice other than to band with this group who have been pushed to the extreme.

Yet despite this realism, Goldberg stage manages the story, placing his characters and his history in the context of other great stories. Kima, determined to save her people, is much like Esther of the Bible, intent upon saving the Jews from slaughter. Shakespeare also forms a backdrop. Levinson, who has performed Shakespeare in translation, raises the question as to whether their play, the conspiracy to kill Stalin, is a Richard II story, which aligns their actions with the story of Bolingbroke overthrowing an ineffectual monarch, or Richard III, which changes the focus of the story by portraying Stalin as murderous.

This dichotomy is balanced by the question of Lear, a more ambiguous king, who is both tyrannical to begin with and pathetic in his end. Goldberg claims to have met Shmuel Halkin when he was young. Halkin was responsible for translating King Lear into Yiddish. Halkin is mentioned by name in the novel, and Levinson’s personal association with Halkin’s Kinig Lir in the theatre as an actor is important. Stalin denies the implied comparison: I am not Lir! I kept my kingdom!, but this only highlights his lack of humanity which Lear regains. Stalin’s boast, I’ll make it [his kingdom] bigger still, uniting Earth and hell to build a heaven, is grandiose and villainous.

Are Levinson and Kogan serious about their plot to assassinate Stalin, or is this a theatre game staged by infantile old men? (179)

It is an uneasy question as it reminds us that much of the grand sweep of history is dictated by the vagaries of human weakness, and that like actors in a play (much like the Napoleon that Tolstoy portrays in War and Peace) individuals usually have little control over destiny. Hence, the frequent use of stage script throughout the novel to represent key conversations, and the use of authorial intrusion, particularly in the latter part of the story (It must now be disclosed, The curtain rises) to remind us how effectually the reader, too, is managed and positioned by the narrative.

The history that inspired this story, is certainly fascinating. Goldberg writes that the story was inspired by stories he heard as a boy, spread as propaganda against the Jews, that Jewish doctors were deliberately killing Russians with their treatments, and that Jews used Christian blood, particularly that of children, for religious rituals. This kind of othering has been employed throughout history to scapegoat and ultimately to justify actions against minority groups. This is the point at which the intellect, reason and even the most well-meaning ideology is usurped by unreason and the basest of human emotions.

Which brings me to an interesting character in the book, Lewis. Lewis is a fine example of the clever layering this book achieves. Lewis, a black welder who leaves the United States fed up with the Jim Crow laws, comes to Russia to work on the construction of the city of Gary, only to find himself groomed by a film director who wishes to use him for propaganda purposes, to pick at the scab of America’s past, slavery. It is Lewis’s character who both brings relevance to Western readers, in that the book is not only able to question soviet ideology, but that it questions the danger and illusion of any ideological construct. The Jim Crow laws, on top of America’s history of slavery, made a mockery of the ideal of equality supposedly enshrined in the constitution, and the myth of the American Dream – the idea that equality and hard work meant anyone could make it. However, this is balanced against the Soviet ideal of a worker’s state, in which workers are defined not by race or cultural background, but by their relationship to the means of production. At least, that’s how it is meant to be:

Marxism was Lewis’s escape route from the construct of race. Theoretically, a man is defined based on his class, which in turn is defined by the relationship to the ownership of the means of production. National origins and race are negated, voided. That is how it should be, yet race remained un-negated, menacing Lewis as he crossed the oceans, the steppes, and the frozen wilderness. (71)

Lewis’s racist treatment in Russia has made him disaffected with this ideal. It is ironic that when we first meet Lewis he is done up in white-face to avoid trouble. Add to that, he is constantly associated with or confused with Paul Robeson, the African-American activist who appeared in the 1936 version of Showboat. Despite some comic episodes, there is a morally bleak outlook in this book: that human beings have the intellect to articulate social ideals, but human nature makes a fallacy of them. That, it seems, is the weakness in the belief of historical imperative.

This book is highly recommended.