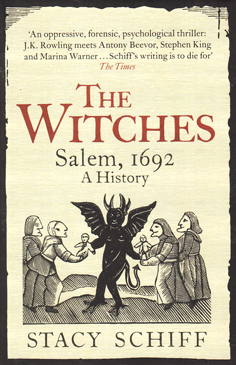 Stacy Schiff’s account of the Salem witch trials of 1692 is fascinating to read. Like many people, I suspect, my knowledge of the trials is based on Arthur Miller’s play, The Crucible. The Crucible is one of the best plays I have read, but Schiff’s book promised to make the account of the trials and executions dramatized in Miller’s play seem mild in comparison. And so it did. Miller acknowledges at the start of his play that he found it necessary to limit the range of characters for dramatic purposes, sometimes conflating several into one. The scope of his drama is also necessarily more focused. John Proctor is a central in Miller’s play, and while his dignified death is recounted in Schiff’s book, he is not central to the whole drama. Schiff introduces her readers to several other people integral to the proceedings of 1692, or integral to the political debate and much of the literature devoted to the Salem witch trials. Notable differences include William Stoughton, a key instigator of the trials as well as Increase Mather and his son Cotton whose writings reveal much of what happened as well as the thinking of the time. One of the surprising differences between history and Miller’s dramatization is that Abigail Williams, one of the afflicted girls, was only eleven years old in 1692, but Miller raises her age to seventeen. I suspect this is to do with his need to create protagonists with motivations modern audiences would understand. In the play Abigail has had a brief affair with Proctor. Her malicious prosecution of Proctor is attributed to this in the play. In the real world of 1692, it would appear motivations were possibly just as ignoble, and so Miller’s dramatization doesn’t have it too wrong.

A strength of Schiff’s account is that it attempts to make sense to a modern reader of what appears to be a moment of madness, not just of one or a few people, but a small society. To this end, Schiff demonstrates that the thinking and conditions of the Puritan community of 1692 are very alien to most modern minds. Her chapters focus on several pressures on the community, for instance. Miller makes the point in the notes of the beginning of the play that Salem was frontier territory and that the threat from the Indian nations was real. Schiff delves deeper into this reality to reveal a society traumatised by frontier war. Several communities had been overrun by Indians not far from Salem, their people killed. Most members of the Salem community had lost somebody in warfare with Indians. Several of the afflicted girls had family members including parents, most usually fathers, killed in the conflict. Beyond the small bounds of the village was the wilderness, a place untouched by God.

Salem was also isolated from England. After the overthrow of Andros, a New England governor, Salem had to wait several years before a new charter from England and a new governor in Sir William Phips. Schiff paints a picture of a community suffering social breakdown, motivated by petty quarrels, with ordinary citizens litigating against their neighbours on many occasions. Before the witch trials there existed a culture of accusation and retribution. Given the admission by many of the accusers in the years after the trials that their evidence was false, it is not hard to imagine that this poisonous culture was a contributor to the witch mania of 1692.

Schiff’s account is thorough in its explanation of causes as well as its attempts to recreate the paranoia, fear and hysteria that surrounded the trials. She tells the story of the individual accused, the judges and the accusers. While her account is based upon historical evidence rather than imaginative dramatization, one gets the sense of how the whole disaster was instigated and then supported by religious ignorance, petty differences, fear, often a genuine belief in the righteousness of the investigation and teenage hysteria.

One of the fascinating stories related by Schiff is that of Giles Corey, a character in Miller’s play, who becomes the only man ever legally pressed to death in American history. Corey was not tried for witchcraft and so was never found guilty. His execution rested on a little-known medieval law which allowed a court to torture a defendant until they acquiesced or died. Corey was effectively killed for not following court procedure:

The charges read, he pleaded not guilty. The court then inquired: “Culprit, how will you be tried?” Only with the words “By God and my country” could the trial proceed. Corey had uttered those five words in front of sentencing magistrates before; that September Friday he withheld them, stalling the case. (309)

So, Corey was pressed to death for not speaking five words in court. His alleged crime, apart from being the husband of an accused witch, was that he had appeared in spectral form with his wife at the bed of John Gould and delivered pinches to his body. This seems to have been a common kind of accusation, along with reports that accused witches had been seen flying to a meeting, or more prosaic accusations of small afflictions and mishaps that are the stuff of daily life. What wasn’t acknowledged, but what becomes apparent in Miller’s dramatization and the evidence that Schiff presents, was that accusations usually followed petty differences that might have been predicted by the former culture of litigation. Owning property and animals, as Corey had managed to acquire, often correlated with becoming an accused witch. In many instances, property was seized and houses ransacked before the accused were even found guilty. Being accused became tantamount to an acceptance of guilt and the court proceeded along that line.

Schiff presents a number of interesting facts throughout her account. Only one accused witch who confessed was executed. That was a man. Once women confessed they usually received more leniency from the court, although most of the accused were women. This encouraged the accused to confess, but then they found they had to provide elaborate accounts of their crimes which unwittingly implicated others. The youngest accused were seven years old and were imprisoned just as were the adults, in manacles. Children were known to accuse their parents, sometimes leading to their death. Mothers accused children, also, although there is no account of a father making an accusation. At the height of the witch mania it is estimated that 10% of New England had been accused. Local government broke down. Sheriffs became destitute, unable to keep up with the travels to arrest witches and not properly reimbursed for their efforts. Crops were neglected. This was a society turned upon itself. Its paranoid effort to defend itself from dark forces ironically pushed it toward decline. After the trials Puritanism lost its predominant influence. Anglicanism and other religious sects gained influence in the area and Christmas was eventually celebrated.

Perhaps one of the most interesting aspects of Schiff’s retelling of this mad period lies in her treatment of the evidence. Schiff begins her account of the alleged supernatural occurrences from the perspective of a credulous narrator. Evidence presented to the court is taken at face value in the retelling of the witches’ supposed crimes, helping to paint a picture of the kind of conspiracy the judges believed prevalent. However, Schiff becomes more critical of the evidence accepted by the Salem courts and offers some plausible explanations for the drama as the book concludes. I thought this paid respect to the horrifying accusations many faced, as well the needs of a modern audience to attempt to make sense of the whole thing.

The book is well-supported by notes at the back, a select bibliography, a glossary of characters and an adequate index, along with coloured plates featuring portraits, illustrations of the time and court evidence. It is a detailed, intelligent account of the witch phenomenon, very readable and well worth the effort. 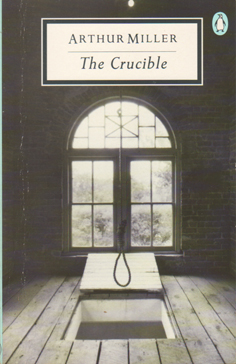 A Modern Witch Hunt
Arthur Miller based his play, The Crucible, around the Salem witch trials as a criticism of the McCarthy trials for unAmerican activities in the 1950s. Like the witch hysteria in 1692, America feared infiltration by Communist sympathisers and Senator McCarthy was tasked with addressing the threat. Miller, along with other prominent Americans, was implicated in this modern witch hunt, and meant his play to highlight the fear and hysteria generated by the trials, and the danger of destroying innocent people.