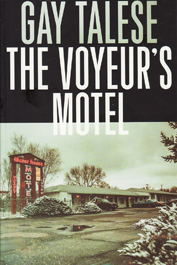 The Voyeur’s Motel is a light, quick read. Many who read it will be fascinated. Some may be outraged. If the subject of the book, Gerald Foos, is to be believed, some will say they find the topic distasteful, but secretly they will lap it up.

Gay Talese was contacted by Gerald Foos by letter in 1980. Talese was about to have his study on sexuality, Thy Neighbour’s Wife, published. Parts of the book had already been published in magazines and it had attracted some publicity. This is what had encouraged Foos to contact Talese, to tell him of his long-term project, to secretly study the private lives of those who stayed in his hotel. According to Foos, he had material that Talese might find valuable.

Foos bought the hotel with the explicit intention of turning several of the rooms into viewing chambers. He was a voyeur and was fascinated with sexuality and other aspects of people’s private lives; of studying the gulf between a public veneer and their private reality. For years, he kept records of his guests’ sexual peccadilloes as well as conducting his own crude experiments into human nature while secretly spying upon them.

Naturally there are many lurid episodes in the book recounting scenes witnessed by Foos over many years. Because Foos kept a detailed journal of his observations, Talese was able to quote many long passages in Foos’s own words, not only recording in clinical detail what he witnessed, but recording the social norms and mores of several generations: from the era of the civil rights movement, for instance, in the 1960s, when interracial couples would enter the hotel separately to try to hide their relationships, to the latter half of the 1970s, when such relationships were openly acknowledged; or the rise in more relaxed attitudes to aspects of sexuality, like group sex. And often, Foos would complete his observations with a conclusion which outlined his thoughts about the couples’ relationships, or drawing moral points from what he observed.

It would be too easy to point out the obvious illegality of Foos’s project and his own immorality. Naturally, Talese discusses this, not to mention his own morally questionable position, given that he knew of Foos’s actions from 1980 onwards. Foos claims that all men are voyeurs while only a small percentage of women are. His assertion reminded me of conclusions drawn by John Berger in his book, Ways of Seeing, which I recently reviewed. Foos suggests this is part of a male orientated interest in pornography, for instance. But putting these things aside, there are also some interesting conclusions drawn by Foos’s ‘study’, ranging from America’s involvement in Vietnam, drugs and the mendacious nature of society. But, in particular, as Berger was suggesting, there exists a power relationship between men and women in sexual roles. It's a power relationship Foos exploits, but never fully acknowledges as part of his own actions.

I think one of the more important points that can be made from the book is the potentially negative effects of repressed attitudes towards sex. The happiest couples he records are those who have openly sexual relationships, although is also willing to admit to a very small percentage of the population who form affectionate relationships of a seemingly non-sexual nature.

Overall, this is an unusual book, full of moral ambiguity. Its subject has broken the law, invaded people’s privacy and yet rails against the ‘voyeuristic’ nature of Big Brother, invading everyone's privacy using everything from security cameras to internet tracking. At the same time, he makes observations about others and society that seem valid, albeit based upon observations made from his own illegal activities. This is a book worth a read, since you need to make up your own mind about Gerald Foos.

...men act and women appear. Men look at women. Women watch themselves being looked at. This determines not only most relations between men and women but also the relation of women to themselves. The surveyor of woman in herself is male: the surveyed female. Thus she turns herself into an object - and most particularly an object of vision: a sight.