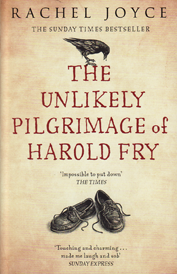 This is one of those books that has quotes from gushing reviewers on the inside cover: charming, tender, profound emotions and polished to perfection. I’m not sure whether these little snippets are meant to sell the book or suggest it is oversentimental and maudlin. Like magazine-show journalists who don’t trust their audience to engage in anything other than how their subject feels, the marketing arm of many publishers has its readers primed to reach, like a synaptic response, for the tissue box.

This may seem a little unfair given that I actually liked this book. I liked it a lot. Handled poorly, the subject matter may have felt manipulative and forced, much like the words of the reviewers used to flog a copy in a book store. But I found the characters engaging, their difficulties real and their decisions sometimes irrational, and therefore all the more believable.

This applies particularly to the protagonist, Harold Fry. Harold receives a short note from an old work colleague, Queenie Hennessey, informing him that she has cancer and is beyond saving. She is dying in a hospice in the north of England. Harold, a man not given to expressing his feelings after two decades in an emotionally repressed marriage, sets out of his house to send a letter in reply. However, driven by a force he doesn’t quite understand, Harold walks past the post office and continues walking for another 87 days in an odyssey to not only visit the dying Queenie in the north of England, but with a muddled belief that his journey will give her something to live for; that he might just save her.

Harold is initially inspired by a garage cashier who tells him that faith is what is needed: You have to believe. That’s what I think. It’s not about medicine and all that stuff. You have to believe a person can get better. Joyce avoids narrowing the book’s appeal by not placing importance on religious faith alone. Harold’s is a secular faith, an irrational belief, a desperate need, a terrible guilt and a desire to define who he is. Joyce balances the view of the garage cashier with others Harold meets along his way, from the scientific objectivism of the oncologist to the practical faith of Sister Philomena of St Bernadine’s Hospice.

There is a lot of sadness in this book. Much of it comes from an overwhelming sense of regret, from merely having lived a life. The terrible source of regret that tears at Harold and Maureen’s marriage is fairly evident early on, although in keeping with the tenor of their marriage, is not given voice until the characters learn to confront the barren centre of their relationship. There is also Harold’s past, his childhood burdened by unloving parents, a difficult relationship with his son, and consequently with his wife; all this could easily become tawdry, but I think Joyce handles the grief of her characters with honesty and finesse. That’s the strength of the book; that so many characters, major and minor, reveal their human vulnerabilities in ways that lighten the grief of unspoken years, because when Harold starts to speak to people, so many of them bear scars. Harold reflects:

It must be the same all over England. People were buying milk, or filling their cars with petrol, or even posting letters. And what no one else knew was the appalling weight of the thing they were carrying around inside. The superhuman effort it took sometimes to be normal, and part of things that appeared both easy and everyday. The loneliness of that. (106)

There is a recurring sense in incidences and in reflective passages like this that we have so much more in common with our fellow human beings than we realise.

Naturally, the long journey by foot that Harold undertakes is also a journey of self-discovery and growth. This is a fairly standard literary trope. There is something of the everyman in Harold Fry. The suffering he undergoes is echoed in the people he meets, and like Forrest Gump, who heads out of his house one day on a foot journey across America, Harold attracts his own band of strange acolytes, for a while, who see a purpose and meaning reflected in their own lives in Harold’s quest to save Queenie Hennessey.

There is also something quintessentially English about Harold Fry. His stoicism in the face of physical and emotional pain recalls the old stiff upper lip of the English type. Joyce’s choice of names suggests something of this too. Harold was the last English king before the Norman invasion. A follower of Harold in his walking pilgrimage, Richard, whose abbreviation, Rich, suggests his enterprising and controlling nature, is also surnamed Lion, recalling Richard the Lionheart, (who was essentially a French king despite being lionised as a true Englishman in the Robin Hood myths) who fought in the Crusades and spent most of his time out of the country (and was killed by the French, ironically). Rich and Henry become antagonists of sorts in the novel. The novel is littered with names that seem to allude to England’s royal traditions. But of them all, it was Rich who stood out to me as a foil against Harold, to define something quintessentially English in Harold’s character and his journey.

There is a lot of humour in the novel, too, particularly in the scene with the famous actor (who is never named). A man of sleazy tastes and course interests, we find he is nothing like the star represented in the autobiography he is promoting, (not written by him). I smiled at his irritation with his fans who seem determined to worship him by naming their pets after him.

What recommends this book is the simplicity of the writing that captures so accurately the inner torments, regrets, memories, hopes and uncertainties of its characters. There is a humanity in all the characters, and an insight in just how easy it is to make human connection, but at the same time, how hard it is given the past, given misunderstanding and uncertainty, to make a start. 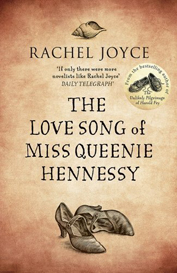 The Love Song of Miss Queenie Hennessey is a companion novel to The Unlikely Pigrimage of Harold Fry. It is based on the same story but told from the point of view of Queenie as she lays dying in the hospice, waiting for Harold to arrive.