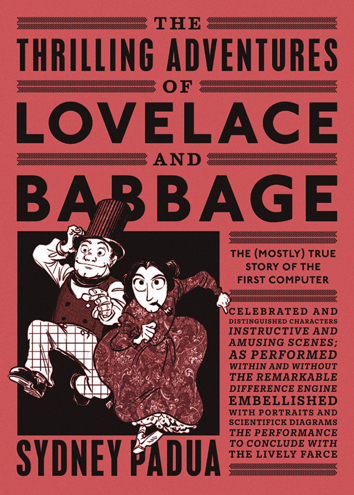 The Thrilling Adventures of Lovelace and Babbage
Sydney Padua

Sydney Padua’s graphic novel, The Thrilling Adventures of Lovelace and Babbage, started life as a steampunk-style webcomic, then was published in one volume in 2015. It's worth checking out the website, there are additional comic strips which didn't make it to the book, including ones where they actually fight crime, something that I was disappointed to not find in the book. To visit the website, click here.

Padua's book is based on Ava Lovelace and Charles Babbage's work on the Analytical Engine1. Ada Lovelace was a friend of Babbage and corresponded with him regularly about the Engine and about many other mathematical issues. She developed an algorithm which would have enabled the Engine to calculate a sequence of Bernoulli numbers. For this work, published in 1843, Lovelace is credited with creating the first computer program.

Lovelace died in 1852 and Babbage in 1871, without the Engine being built and without Lovelace's program's being tested. However, in this graphic novel, Lovelace and Babbage fall into an artificially created Pocket Universe where they complete the Engine and use it to have thrilling adventures and fight crime.

Although a graphic novel, this isn't that fast to read, due to the detailed footnotes on each page. Some of the footnotes have endnotes, providing even more detail. And occasionally, some of the endnotes have their own footnotes. It can all look very circular when you try to work your way through the book2. These footnotes and endnotes provide a huge amount of factual background and links to primary sources for many of the jokes in the comic strips. Yet sometimes it becomes apparent that this crazy annotation has a point. On page 25, for instance, it initially looks like Padua has gotten a bit carried away with the footnotes, as they take up around two and half times more space than the comic strip on that page. But the footnote explains that there is a reason for this ratio. Babbage gave a lecture in Turin, Italy, in 1841 on his Engine. Details of this lecture were published in 1842 in French by the Italian mathematician Luigi Menabrea. Lovelace's 1843 paper started as being a translation of Menabrea's paper into English, but encouraged by Babbage, she added her own ideas to the paper, with the end result matching the ratio of comic to footnote. The resultant paper took up 65 pages of the September 1843 edition of Taylor's Scientific Memoirs, with Menebrea's part being around 18.5 pages and Lovelace's additions, including her program suggestions, around 46.5 pages.

I don't know if this book would appeal to everyone, but I found it both hilarious and delightful. I mean, steampunk style is hard to resist anyway and there's a great story behind the comic strips. Lovelace died young and Babbage never built his engine, so I find the Pocket Universe in which Lovelace lives longer and the machine is built rather more appealing than reality. And the strips are beautifully drawn.

I also loved the other characters who pop up in the various stories, such as the Duke of Wellington (who always appears on his horse, even when he is in Parliament), Queen Victoria (who always speaks in gothic lettering and counters Babbage's statement that knowledge is power with her own belief that POWER is power), and other notables from Victorian times such as Marian Evans (on behalf of her ‘friend’ George), Charles Dickens and Thomas Carlyle. But apart from all this, I loved that despite the alternative history approach, the book provides a great overview of the life and work of Charles Babbage and Ada Lovelace. I can see that some people may not like the way the footnotes and endnotes interrupt the flow of the comic strips and could find it disjointed. After the first chapter, I found it easier to read the comics and the footnotes together, but leave the endnotes to the end of the chapter, rather than going back and forth in an attempt to keep the endnotes in the sequence.

And while Padua makes no claims to being a mathematician, she manages to explain the mathematical and engineering concepts behind the Engine in an easy to understand way. Overall, this book was a delight to read.

2 A 360˚ circle, not the strange 400˚ circle used by the French Republic for a mercifully short time.

3 Ada, Countess of Lovelace was the only legitimate child of Lord Byron

Watch Babbage's Difference Engine and its many parts operate

An explanation of the Difference Engine and its purpose. 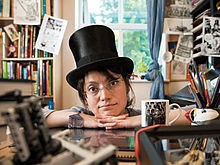 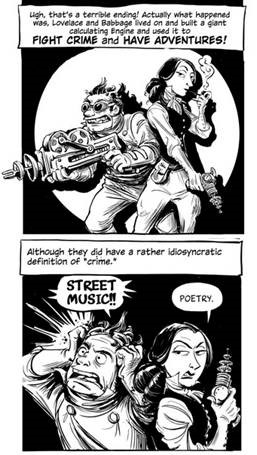 An extract from the book

Although these seem like more jokes, Babbage really hated street musicians and Lovelace was watched closely all her life for signs of "poetic influence", lest she develop any of her father's disorders3