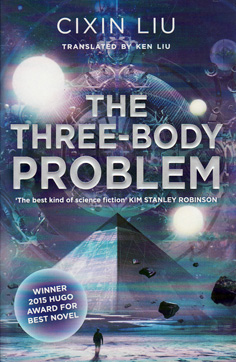 地球往事 (The Remembrance of Earth's Past Trilogy): 1

In his author’s postscript, 刘慈欣 (Cixin Liu) states, I do not use my fiction as a disguised way to criticise the reality of the present. It’s an interesting statement considering some aspects of the book, neatly illustrated by the following:

… The human race is an evil species. Human civilization has committed unforgivable crimes against the Earth and must be punished. The ultimate goal of the Adventists is to ask our Lord to carry out this divine punishment: the destruction of all humankind. (274)

Confusing the voice of a character with that of the author would be naïve, but it is nevertheless interesting that this point of view is expressed in the novel. The Adventists are extremist who emerge after the revelation that scientists have made contact with an alien civilisation. The presence of the aliens only four light years away, an ‘Other’ to the human race, is a polarising moment in human history that raises a simple question: is the human race worth saving?

This is the first time I have read a Chinese Science Fiction novel. The translation into English for an American audience by Ken Liu is skilful. Mindful of the cultural differences, Ken Liu provides useful translator’s notes where cultural or historical knowledge may not be expected of a western audience, but retains much of the cultural flavour one expects the original must have.

The novel begins in 1967 at the height of the Cultural Revolution. The plot centres mostly on Ye Wenjie, an astrophysicist who witnessed her father’s execution as a dissident during the Cultural Revolution, and Wang Miao, a nanomaterials researcher who is drawn into the events that Ye’s involvement in the Red Coast experiment – an astronomical monitoring facility – sets in motion forty years later.

Despite Liu’s protestation against one of the very tenets of Science Fiction, his novel does reflect modern concerns about the environment and humanity. Mike Evans, a westerner made rich by an inheritance from his family’s oil business, is driven to right humanity’s wrongs against nature. In China, he plants thousands of trees in an effort to mitigate the effects of deforestation in order to save a species of swallow. Evans espouses the ideal of ‘Pan-Species Communism’, thereby neatly linking environmental concerns with political ideology. Evans questions, Why does one have to save people to be considered a hero? Why is saving other species considered insignificant? Who gave humans such high honours? Evans argues that little progress has been made since the ideals of the French Revolution. His ideology of Pan-Species Communism advocates that animals have equal rights to humans, a thought held by many, but his thinking has taken him down a darker path, and he is now given an unexpected insight with the advent of the Trisolarans, the alien race: Human civilisation is no longer capable of improving by its own strength.

Mike Evans is a minor character in the novel, but the threat posed by his ideology is central to Liu’s thinking and the novel’s climax. Given Liu’s author postscript, and his division of the Earth-Trisolaris Movement (ETO) into the Adventists and the Redemptionist, it seems to me that he intends his novel to be polemical. At the heart of the question about the environment is the question of the redemption of the human race. And redemption is not just about species survival, but is couched in religious terms. The knowledge of the aliens is enough to spark a new religion for which, the narrator notes, is the first religion in history with evidence of that which it worships: the alien race is referred to as ‘Lord’.

Ironically, the aliens are nothing like divines, but instead mirror humanity in many ways. They are plagued by the problems of their cosmological situation, which shapes their civilisation, much the same as access to resources and degradation of the environment has shaped humanity. The Three-Body Problem of the title is a problem in physics I was unaware of until reading this book. Predicting the course of an object set in motion (let’s say a planet) is simple. Even two objects moving under the influence of the gravitation of its twin can be calculated. But three bodies together, each moving and exerting a gravitational influence on each of the others, presents a huge problem in accurately predicting the paths the bodies will take. According to the book, this mathematical conundrum has never been solved, at least until our fictional Wang Miao comes along. The implication, cosmically, is that a planetary system with three suns is inherently unstable and unlikely to support life, let alone life that has evolved enough to develop advanced technologies. Yet this is precisely what the Trisolarans have done, even though they remain at the mercy of their unpredictable cosmic situation.

Yet, it seems evident that like much Science Fiction, Liu’s book does displace current concerns and issues into its fictional universe. Much like the world of the Trisolarans who endure Stable Eras and Chaotic eras due to their peculiar place in the universe, the human race also endures fluctuations in its history and advancement, if not cosmically, then politically and culturally. The story, itself, starting as it does with the Cultural Revolution, suggests this. The game played by Wang that is meant to represent the Trisolarian world and the problem caused by its three suns – a practical example of the three-body problem – also represents human advancements and setbacks. In fact, Liu represents the aliens in fairly human terms with characteristics not dissimilar to the human race, not only in the human created counterpart of the game, but in the direct representations of the alien race by the narrator.

The strength of this novel lies not only in its brilliant ideas, supported by a strong scientific background, but in its philosophical underpinnings and its concern for character. Liu is an author who understands humanity as much as science. This is ably demonstrated in the character of Ye Wenjie, whose suffering during the Cultural Revolution forms a convincing motivation for her actions, as well as her differentiation from the more extreme Mike Evans, whose own backstory makes him a believable, even a highly sympathetic character, also.

Apart from that, it is also a novel that is strong on plot and well-paced. There is a sense of urgency to the fates of all, from the micro to the macro level. From small scenes such as Wang Miao’s photography session that becomes more gripping and mysterious as it continues – he notices a sequence of numbers that are evidently a countdown appear on any image he (and only he) takes with any camera – to the intriguing problems faced by the world represented in the Three-Body Game, to the potential violence and eloquent philosophy of the ETO, this is a novel that is strong in every aspect. Naturally, the problem in reviewing a book like this is that I am yet to read its two sequels. But this first novel is a confident start. I look forward to reading the concluding novels, 黑暗森林 (The Dark Forest) and 死神永生 (Death’s End), and can’t recommend this one enough. 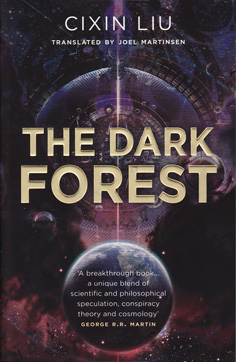 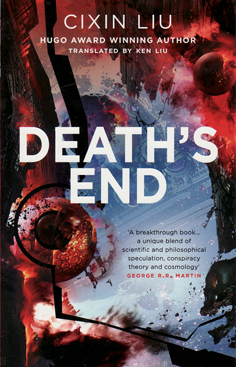