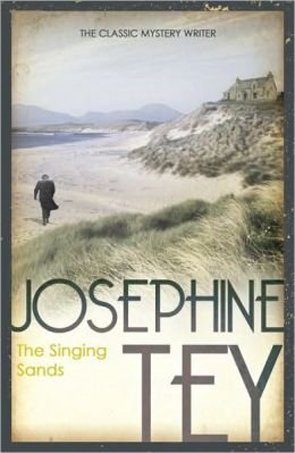 The beasts that talk,
The streams that stand,
The stones that walk,
The singing sands,
. .
. .
That guard the way
To Paradise.

Although Josephine Tey was a well-known author in the Golden Age of detective fiction, my previous acquaintance with her writing has been limited to The Daughter of Time. In that book, detective Inspector Alan Grant is laid up in hospital with a broken leg, and to relieve his boredom uses friends to help him research various historic documents to consider whether or not Richard III actually murdered his nephews, Edward and Richard, known to history as the Princes in the Tower. Not really a standard murder mystery. At the start of The Singing Sands, Grant is travelling to Scotland for rest, on leave from Scotland Yard, to recover from some form of burnout or nervous breakdown. So, my initial thought on the opening chapter was that this Grant character appeared to be rather a sickly fellow who is always on sick leave.

The day before I finished this book, I noted as I put it away for the night, that I had only a chapter and a half left before I finished. With the mystery being where it was at that point, I wondered how it could be wrapped up with so few pages remaining. Well, it was wrapped up, but I felt it all happened a bit abruptly, using the device of a written confession by the murderer addressed to Grant, saving the detective the bother of finding any proof. This had a rushed feel to it, as if Tey wasn't quite sure how to get herself, and Grant, out of the situation where Grant knew who the murderer was but had no idea how he could prove it.

Since finishing the book, I've read a little about Tey, and learned that this was probably the last book she wrote before her death in 1952. The manuscript was found in her desk. So, it would seem that what we are presented with in this book is a draft, and that Tey may have reconsidered her ending and made it stronger had she lived. Overall the book was well written, and I can understand publishers wanting one more book from a popular author, especially when her previous book, The Daughter of Time, was so well received. But Tey hadn't sent it to her publisher. We have no way of knowing if the manuscript was at a point where she was happy with it, or whether she intended to revise and possibly redraft it. At least it is distinctly a separate book to any she had previously published, unlike Go Set a Watchman, published just before the death of Harper Lee, and just after the death of her sister and carer. Lee had previously stated that To Kill a Mockingbird was the only book she ever intended to publish, and the decision by her lawyer to publish the manuscript found amongst her papers was a controversial one.

There is a minor side story in The Singing Sands which is mostly hinted at, not much developed and with no final outcome. This also suggests to me that the book is an early draft, and that a little more detail would be added to this side plot. Or perhaps it was meant to lay the ground for a future story. Not having read much Tey, I can't say if this was something she did in her stories.

The beginning of the book has a heavy emphasis on Grant, on his personality and on his illness. Although Grant sees the dead body of the victim in chapter one, the mystery doesn't get a look in for some time. Instead we focus on Grant's struggles, and I found this to be a strength of the story. Grant isn't perfect, as shown by his breakdown and his claustrophobia, and he constantly has a second voice inside his head which argues every one of his decisions. The Grant in The Daughter of Time seemed a much more focussed character. The Grant of this book is less in control and more human, and a much more appealing character. The suggestion of mental illness and of Grant's struggles with explaining his condition and trying to hide it from everyone makes this story seem much more modern than many of the Golden Age mysteries. The reaction of Grant's boss to his request for leave is also relevant to modern times, with his boss making it clear that he has no time for Grant's ‘weakness’, and that he considers the illness to be an invention to allow Grant additional holiday leave to enjoy fishing in the Scottish Highlands.

The actual mystery comes very late to the focus of the story. Grant initially puts the dead man he saw on the train out of his mind, but then slowly starts thinking about him more and more, fascinated by both the impression of character he had from the man's reckless eyebrows, and by the fragment of poetry the man had scribbled on his newspaper. He makes a few enquiries, then when it all seems to peter out as an accidental death, he tries to put it all out of his mind. He does manage to spend some time focussing on fly fishing, but one day he can no longer avoid the mystery.

For nearly a week he thought fish, talked fish, and ate fish.

And then, one evening, on his pet pool below the swing bridge, he was startled out of his complacence.

He saw a man's face in the water.

There was time for his heart to come up into his mouth before he realised that the face was not under the surface of the water, but at the back of his eyes. It was the dead white face with the reckless eyebrows.

Grant again starts to consider why this man was travelling to Scotland, and picks up on one line in the man's writing - The singing sand - to think that maybe the Outer Hebrides hold the answer. The island of Cladda is known to have sands that sing, or at least, make some kind of noise that can loosely be describes as singing. Grant braves appalling weather to travel to Cladda, but finds nothing there to help him with the mystery of the dead man with the reckless eyebrows. However, battling the elements on Cladda and joining in local entertainments somehow helps his mind recover, and he starts being able to cope with his demons. This is all still leisurely, with lots of beautiful descriptions of the wild island.

The mystery then suddenly gains momentum when Grant returns to the Highlands and meets a friend of the dead man in chapter 9. After this the story becomes more of a standard old school mystery, with Grant returning to London to continue the investigation. But it still contains some beautifully descriptive writing, such as Grant's musings on the colour of London buses in the fog:

London was a misty grey with scarlet trimmings, and Grant looked at it with affection. Army nurses used to have that rig-out; that grey and scarlet. And in some ways London gave one that same sense of grace and power that went with that Sister's uniform. The dignity, the under-lying kindness beneath the surface indifference, the respect-worthiness that compensated for the lack of pretty frills. He watched the red buses making the grey day beautiful, and blessed them. What a happy thing it was that London buses should be scarlet. In Scotland the buses were painted that most miserable of all colours: blue. A colour so miserable that it was a synonym for depression. But the English, God bless them, had had gayer ideas.

Grant determines who has murdered the young man, and the probable motive, but is at a loss on how to obtain proof. Every line of investigation peters out to nothing. But as Grant ponders his next steps, he reads the morning paper and finds the motive exposed to the world. And then he receives the letter which ostensibly reveals all the details. Grant considers the case closed, in time to return to Scotland Yard. I still had questions at the end, such as why the young victim actually wrote the verse on the paper, and even when he found the time to write them, giving the timing of the murder as detailed in the confession.

Despite the unsatisfactory end to this mystery, I really enjoyed the book. The writing was beautiful, and I enjoyed the slow style and the exploration of Grant's mental health.

They were all wrong about hell, he thought. Hell wasn't a nice cosy place where you fried. Hell was a great cold echoing cave where there was neither past nor future, a black, echoing desolation. Hell was concentrated essence of a winter morning after a sleepless night of self-distaste.