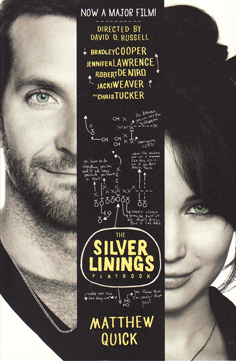 Three years ago, I was on a plane to the US and the movie of Silver Linings Playbook came on the entertainment system. I knew nothing about it and so decided to watch it. It was an interesting and enjoyable movie, with a touching ending.

So, when I saw this book in the shop, I decided to give it a go. The book has the same storyline for the most part, but the ending is very different.

Pat Peoples is a young man just released from a psychiatric hospital in the care of his mother. His aim in life is fourfold: to get fit, to be nice, to always look for the silver lining and to resolve his separation from his wife, Nikki.

Enter a mysterious young lady, Tiffany, introduced to him by friends, who is determined to befriend him, with certain motives. Hellbent on his reunion with Nikki, Pat agrees to some demands from Tiffany, in return for her help. Their friendship develops, but will her plan for the future come to fruition? Added to the background are the complicated family issues, which cause tension between Pat and his father in particular and his 'mental episodes', not being aware of all the secrets of his past.

The one main thing I found a little off-putting in the story line was the woven reference to the Eagles' games throughout the book. Not being a sports fan, I found myself switching off a bit in these parts, though they are probably important for the development of the male family members.

I pondered why the endings were so totally different. I'm not sure why, perhaps because of the different dynamics, but I felt the movie ending was better. But perhaps you can decide that for yourself.

I give the book 3 stars. Worth a read, but perhaps better before seeing the movie.