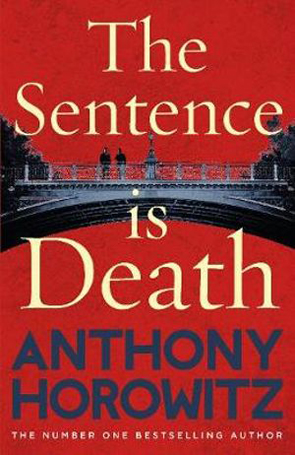 For the second time this year, I started a book by an author whose every previous book I’ve loved, and which I had been looking forward to reading. The first one turned out to be a bit of a disappointment, but not this one. Horowitz is as reliable as ever, crafting a well-constructed and extremely readable mystery. The Sentence is Death is light hearted froth, but very well-written froth that is a pleasure to read.

Horowitz’s ‘friend’ Hawthorne is back, called in to help the police with another unusual murder. This time a high profile divorce lawyer has been murdered with an extremely expensive bottle of wine. There are a fair few people who might want him dead, including several who link him to a mysterious death from six years previously. It has just enough material to potentially make a good second book for the series, to follow up on The Word is Murder (written but not yet published according to Horowitz early in this book).

Horowitz blends just enough fact into his story that I find it very easy to slip into the premise of this series, that this really is the chronicle of a series of murders that Horowitz investigates, playing Watson to Hawthorne’s Holmes. Which bits are real and which bits are made up? It doesn’t really matter, it’s all enjoyable. And the metafiction of the first person POV adds to the enjoyment.

One of the suspects is a fellow writer, a woman Horowitz has met several times in the past, and has been snubbed by at each meeting. She writes ‘literature’ and appears to look down at a writer of children’s books, no matter how successful they are. Horowitz uses her to poke fun at literary pretensions, especially when ‘he’ discovers her hilarious guilty secret. But then, he also pokes fun at himself all the way through the book, so I think the comments on this character are just part of the fun and not a reflection that Horowitz doesn’t feel worthy as a real writer despite all of his commercial success.

The relationship between Horowitz and Hawthorne is a big part of this book. Hawthorne is almost fanatical in keeping every aspect of his life private and away from Horowitz, and doesn’t understand that Horowitz feels he needs to know more about him, to better write the stories. Horowitz manages to unearth a few tantalizing clues about Hawthorne’s past in this book, but every time he thinks he is getting somewhere, Hawthorne shuts him out. I think Hawthorne’s background and the relationship between the two men is something that will be slowly developed across this book series. In saying that, I’m hoping that there will be more of the books. Horowitz himself reveals that he had to sign a three-book contract to get the first book accepted by a publisher, so I hope that indicates that there will be at least one more.

One of the appeals of a cosy mystery is to see if you can spot the clues as you read, and guess the murderer before the reveal. Horowitz plays fair and obeys the rules of the Golden Age – we are given full access to all the clues, even if we are misdirected by the interpretation Horowitz places on the clues. I thought I had it this time, and I actually got close. There are three reveals in this book, and I saw through the first one. But I didn’t pick up on all the subtleties in the plot, and what I had picked as the answer turned out to be the second reveal, overturned by Hawthorne’s brilliant deductions in the third reveal.

This book is an easy read. I finished it quickly, over a few interrupted days. It would be a good one to read on a rainy afternoon, when all you want to do is shut the world out and indulge in a well-crafted mystery. Highly recommended. The Word is Murder introduced Hawthorne and Horowitz as a modern version of the Holmes and Watson pairing. Click the image to read our reviews of the first book.