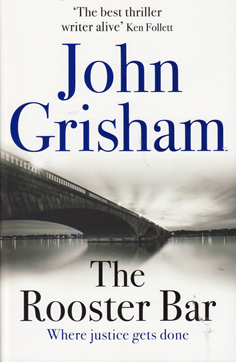 I have long been a fan of crime fiction, particularly that of John Grisham. I've been there since the start for A Time to Kill. Many of his early novels related to murders, but in this day and age, the focus seems to have changed to the white-collar crimes.

When I scan the shelves of the local bookstore looking for my next read, I am looking for certain things: a good thriller, something to make me laugh or a biography and I was pleased to see my Christmas supplement of Grisham, before starting Barnesy's second autobiography1.

The Rooster Bar relates the story of three law students, Mark, Todd and Zola, working long hours as interns trying to get a job, but knowing that their law school is so poor that most won't even pass their bar exam and they will have debts in the hundreds of thousands of dollars before they even get started. Intertwined are two side stories of Zola's family and another mate’s mental health issues.

As I read this book, I lamented about the fact it was the 10 year anniversary of Work Choices2, and how big business (and the government) exploit students. Despite Work Choices being defeated, at least in name, not a great deal has changed. It's devastating to know that the security we fought for with unions over the years has been so degraded by governments who don't care about the little people anymore and businesses who get away with murder knowing they are simply using students.

As I read on, I could understand why the scenario that plays out here is so believable, especially in the US. In the students in Grisham’s story leave law school, they feel a need to pretend they have qualifications they don’t have in order that they might battle the injustice of the system, and in the process, try to uncover the truth of a scam at the highest level.

I know of students who have falsified their academic records to further their career, but I wonder how much forgery at this level actually occurs. I suspect that in the hustle and bustle of legal firms, and many other businesses, it has happened more often in recent years. For how often does anyone ask for proof of qualifications these days?

As our sons start their progression towards the world of work, I hope they aren't subjected to working in this kind of situation and environment, but the reality is becoming more grim.

Grisham is one of the all-time great crime/ legal writers. Like most of his novels, this story won't disappoint. He has you hooked till the very end, and questioning whether what is wrong is actually fair. I can thoroughly recommend this one.

'Barnesy' is the colloquial name given to an Australian singer, Jimmy Barnes, who once fronted the band Cold Chisel and had a successful career in Australia after the band split up. For many Australians, Barnes is the embodiment of working class values, having had an iconic hit with his song 'Working Class Man'

'Work Choices' was a name given to legislation introduced by the Australian Liberal government which moved towards individual enterprise agreements between workers and their employers. Many felt the legislation was unfair, stripping away power from Unions, and leaving workers who lacked bargaining power in potentially exploitative situations. 'Work Choices' as a body of legislation, was eventually scrapped.