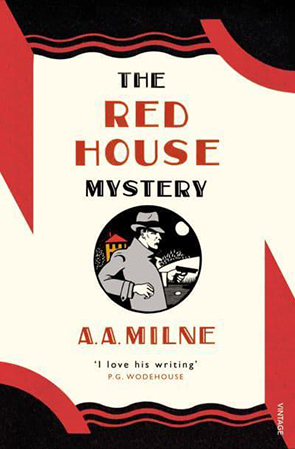 Like all really nice people, you have a weakness for detective stories, and feel that there are not enough of them. So after all that you have done for me, the least I can do for you is to write one. Here it is: with more gratitude and affection than I can well put down here.

- Milne's dedication to his father at the beginning of the book

The biggest mystery after reading this book, for me, is why did A. A. Milne abandon writing detective stories after this one brilliant book? He wrote some children’s books two years after The Red House Mystery was published which went on to become fairly well known. He was then allegedly told by his agent and publisher that writing another detective story would be in the worst taste, given the demand for his children’s books. I think, however, that if he really wanted to write another mystery, he would have, as that same agent and publisher had wanted another detective story from Milne after the success of The Red House Mystery, but he disregarded them and instead wrote When We Were Very Young, the collection of poems which included the first appearance of Winnie-the-Pooh. It seems that Milne didn’t want to be known for writing just one type of book and enjoyed variety in what he wrote. He stopped writing children’s books in 1928, partly because he felt “amazement and disgust” over the fame his son was exposed to, and partly because he enjoying writing what pleased himself. He returned to playwriting.

The Red House Mystery is a classic English country house mystery. Mark Ablett, the owner of the Red House, is entertaining a party of house guests when he receives a letter from his ne’er-do-well brother, Robert, telling Mark to expect a visit from him. It is fifteen years, apparently, since Robert was last in England, having been banished to Australia for undisclosed misdeeds. As Mrs Stevens, the housekeeper, explains to her niece, Audrey, the parlourmaid, “when a gentleman goes to Australia, he has his reasons. And when he stays in Australia fifteen years, … he has his reasons. And a respectably brought-up girl doesn’t ask what reasons.” Evidently, a long sojourn in Australia is practically the definition of criminality! (Australia seems to have had a bad rep in England ever since Oscar Wilde made a few cracks about it, even calling it a “dreadful, vulgar place” [in Lady Windermere’s Fan]).

Robert duly arrives at 3pm when all the houseguests are out playing golf. Mark and his cousin/personal assistant Cayley are the only ones who remain in the house. Robert is shown into Mark’s office by Audrey who then goes to find Mark. A few minutes later Cayley hears a gunshot and finds the door to the office locked. As he tries to open the door a stranger, Antony Gillingham, arrives and assists him. Unable to open the door, they run outside and break open the window. Inside they find the dead body of Robert and no trace of Mark. It seems obvious that Mark has killed his brother and has fled the scene, and this is the focus of the subsequent police investigation. Gillingham, who was randomly in the neighbourhood and who had walked over from his hotel in the closest village to pay a call on his friend, Bill Beverley, one of Mark's guests, decides it would amuse him to play detective and see if he can solve the mystery. He enlists Bill to play Watson to his Holmes and the two work effectively together to solve the crime.

This is a charmingly written story, with a very light and informal style. The style makes it a quick read, as you feel like Gillingham is chatting to you as a friend, as he does with Bill. It has all the elements needed for a fun country house murder - secret passages, long lost brothers, missing keys to locked rooms, and even a ghost. Well, admittedly, this is an actress (one of the guests) dressing up as a ghost as a joke on Mark, but I think it still counts as a ghost. She’s important to the plot and that’s all that really counts.

Gillingham has an interesting ability that turns out to be very useful in a detective: he notices little details and accurately describes what he sees later, even if he hasn’t even been focussing on the details he notices. And he files away everything he hears without conscious thought, until his brain makes connections between seemingly unrelated conversations at a later time. He also has no connection to Mark or Cayley, and is able to think about their actions clearly, unlike Bill who is initially unwilling to think anything bad about people he knows.

In contrast, Bill is like a big child who treats the whole investigation as a game for his amusement. As he sets out to stalk Cayley and ensure he is out of the way while he and Gillingham search for the secret passage they are sure exists in the house, his thoughts run like those of an excited child: “this was glorious fun … people were always doing that sort of thing in books, and he had been filled with a hopeless envy of them: well, now he was actually going to do it himself. What fun!” He doesn’t think through the implications of what they might discover until the end.

Together, Gillingham and Bill pick up a number of important clues which Gillingham cleverly puts together to figure out what has happened. If this was real life, the solution would be completely implausible, but I’m with John Dickson Carr on this subject: “A great part of our liking for detective fiction is based on a liking for improbability” (The Hollow Man, p.153). That the plot is implausible is completely irrelevant to it being incredibly clever and well thought out. The whole murder plot is ingenious, and Gillingham’s unravelling of it is equally ingenious. Milne plays fair with his readers and shares all of the clues, but the solution still comes as a clever surprise.

This book was a lot of fun and I really enjoyed it. Even though it was the only mystery Milne wrote, it deservedly earned him his membership of the Detection Club. Highly recommended. 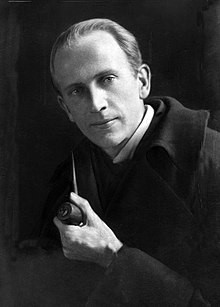 “Are you prepared to be the complete Watson?” he asked.

“Do-you-follow-me-Watson; that one. Are you prepared to have quite obvious things explained to you, to ask futile questions, to give me chances of scoring off you, to make brilliant discoveries of your own two or three days after I have made them myself all that kind of thing? Because it all helps.”

“My dear Tony,” said Bill delightedly, “need you ask?” Antony said nothing, and Bill went on happily to himself, “I perceive from the strawberry-mark on your shirt-front that you had strawberries for dessert. Holmes, you astonish me. Tut, tut, you know my methods. Where is the tobacco? The tobacco is in the Persian slipper. Can I leave my practice for a week? I can.”

“You're the perfect Watson, Bill. You take to it quite naturally. Properly speaking, I oughtn't to explain till the last chapter, but I always think that that's so unfair.”