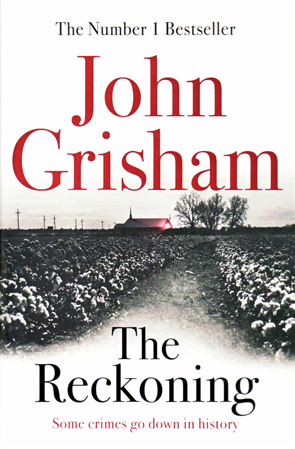 It is usually around this time of the year that two of my favourite authors, Coben and Grisham, whose books I have read the complete collection, both publish a new book. As I entered the shop I commented upon this, wondering when their next books would be out. Then I spotted this one, of course I just had to get it. I had actually been reading another book, but at the time I was finding it very hard to get into, so it was back to my old faithful, John Grisham.

The Reckoning is very different in some ways to all of Grisham’s other books. It starts in a similar way, describing a crime, in this case the murder of the well-respected African American Reverend Dexter Bell in a local Methodist church in Ford County in 1946. The surprising part is who has killed him, Pete Banning, another well respected town local and returning war hero. His family, indeed his African American hired help on the farm, are completely bamboozled as to a motive for the crime and his wife, Liza, who is in an asylum and not faring well mentally, is only being given some basic information about the crime. Pete has recently transferred his deeds to his cotton farm and home to his two children, Joel and Stella, and when the case goes to trial this fact doesn't help in his defence. Pete is a private man who believes in saying little, even when his children, sister and wife ask. Making it even more difficult, he refuses to confide in anyone at all as to why he has committed the crime. He appears completely resigned to being executed and in no way gives his counsel anything to defend him. In fact, his most common statement is I have nothing to say. And so, the trial takes it course and leaves the rest of his family wondering what lies in their future, with the possibility of losing not only a father, but their whole livelihood and inheritance, the one home they have only ever known, handed down through the generations. The grown-up children spend time escaping ridicule in town and trying to build a life where they aren't known for their father's crime, especially Joel, a law student. This proves difficult.

The trial is brutal and fast. Despite appeals, little hope is left for Pete to live.

The second part of the book is a flash back and revolves around Pete's earlier life as he meets his future wife, gets married, besotted with his love for her and subsequently, his military life and sets the scene to explain what Pete has been through. It is very different to anything else I have seen in any other of Grisham’s books. Pete was deployed to the Philippines during the war and this section focuses on a historically-based background of his time away, including the atrocities he was confronted with and the fact that during that time, he was missing, declared likely dead. He frequently has to kill people in cold blood, just to survive himself, and the conditions he lives under are more than any person could stand without suffering serious post trauma stress. So, is this why Pete has committed this crime? Is insanity part of the reason? Grisham refers in his author's note to a number of historical books he gleaned facts from when writing this section, and indeed it appears factually correct.

With my background as a high school teacher of humanities, and having been to the Philippines and heard of the background to this period of the war, as well as visiting Corregidor where Macarthur’s statue stands at the shore, I found this section, though quite graphic, interesting and quite factual. But I am not sure how some Grisham fans would feel about it. It is a reasonably long section, and though I can see its purpose is to set the scene and flesh out Pete's character, especially with regard to the change in his lifestyle and possibly his state of mind, I don't know whether such a long and detailed description of his guerrilla warfare was altogether necessary, and I think some Grisham fans may find it a little heavy going. After all they are not expecting a book relating to war.

The final part of the book is what you would expect, a rounding up and trying to determine why Pete committed the crime. All the family members come back to try and piece together why and to achieve some semblance of normality in their future lives. But will this be possible for any of them? How will they cope with what they find, and what other turns will the family take along the way?

Of course, Grisham gives suggestions through his other characters along the way as to Pete's motive for the murder, but nothing is ever as is expected. I knew of one motive that could be ruled out, but I still never expected the ending to this book.

I found this book one of the most interesting of his recent novels. Although it is listed as fiction, Grisham states that much of it is based on a story which may be truth or just an urban legend. He is still not sure. It is gripping and will certainly keep you engaged from start to end. 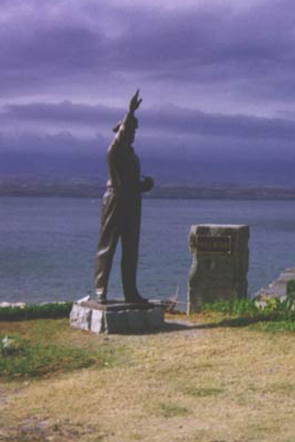 General Macarthur
Macarthur's statue at the site of the north dock, Corregidor, where he left for Australia, 11 March 1942