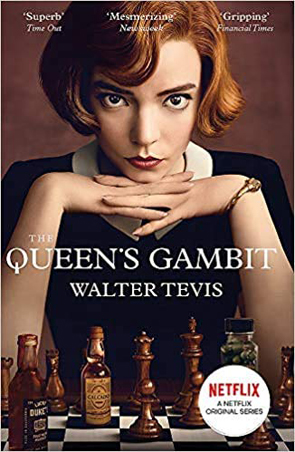 Beth’s mind danced in awe to the geometrical rococo of chess, rapt, enraptured, drowning in the grand permutations as they opened to her soul, and her soul opened to them

The Queen’s Gambit tells the story of Beth Harmon, an orphan who discovers that she is brilliant at chess, and who is also addicted to tranquilisers. Beth's mind doesn’t work the same as most people’s. From the age of eight, when she learned to play chess, her mind has been able to clearly see “the moves of chess games … before her half-shut eyes …” But Beth is also a lonely, isolated child who quickly learns to find comfort in the tranquilisers the orphanage feeds to all the children to keep them docile and controlled.

Until Netflix started to advertise this new mini-series last year, I had never heard of this book. We gave the series a look and were quickly drawn in by the fantastic production. Who would have thought that a young girl/woman playing chess would be the basis for a compelling story, or that chess could look so sexy? I enjoyed the show so much I bought the book it was based on.

I can now say that the Netflix adaptation is true to the overall story, even if it does make a few changes that probably work better for television. For example, in the book, we can experience Beth’s inner exultation at beating someone who arrogantly turned up late for his game against her, but on the screen a wisecrack about the other player maybe having time to get out of check if only he’d turned up on time for the game succinctly conveys the message that he made a mistake in underestimating Beth. And although the adaptation added elements to the story such as Beth’s love of expensive clothes and her growing attractiveness which she uses as a weapon at times, changes such as this added to the visual look of the show and I would think contributed to its success. But I would have to say, much as I loved the television series, this is a case where the story of chess prodigy Beth and her struggles with addiction is better told in the book.

Tevis’s writing style is direct, and the story he tells is largely without embellishment. There are no long descriptions to distract from the story, nor any really moral judgements. Beth has a lot of flaws, but they are just presented to us as how Beth is, without any authorial comments. I enjoyed this straightforward style. Beth is clearly shown as someone who doesn’t relate well to other people and who essentially is always alone. Part of her journey through the book is her finding peace within herself rather than numbing herself with pills against her fear of being alone. This is really one of the strengths of the book over the television series: it shows that Beth is recognising for herself that she is spiralling deeper into addiction and that she needs to take control of her life. She actively seeks out the help she needs, tracking down her only friend from the orphanage, Jolene, and asking for help. And the help she gets from Jolene isn’t a magic pill but practical assistance such as a strict exercise and diet regime which give Beth the strength she needs to take control back in her life.

Overall this is an exquisitely written book that holds interest from the first to the last page. Highly recommended to anyone who is after a great read. 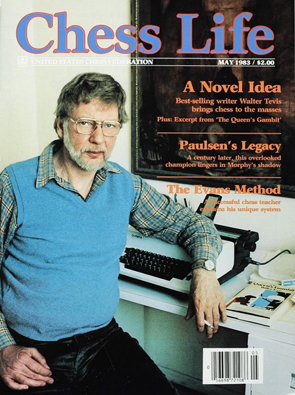 Walter Tevis, shown here on the cover of Chess Life magazine, promoting The Queen’s Gambit. This was his last novel, as he died in 1984, a year after it was published. 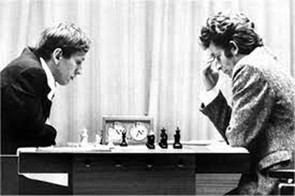 Bobby Fischer vs Boris Spassky, Reykjavik, 1972
Fischer’s defeat of Spassky in the 1972 World Championships was seen as a significant victory for the US in the Cold War, a symbolic defeat of communism by democracy. Matches like this were an inspiration for Tevis, an avid chess player, but the portrayal of Beth’s games with Borgov in the TV series differ from their portrayal in the book. In the series it seems everyone wants to use Beth as a pawn - first when a Christian association attempts to use her to denounce communism in favour of Christianity (okay, this bit is in the book), and then by the US government who want Beth to report back on anything she observes. There’s even a hint that the Soviet’s attempt to sabotage Beth, first using Cleo in Paris to distract her before an important match, and then bringing Townes to Moscow to possibly seduce her. This is not from the book, where the Soviets don’t take Beth seriously as a challenger.