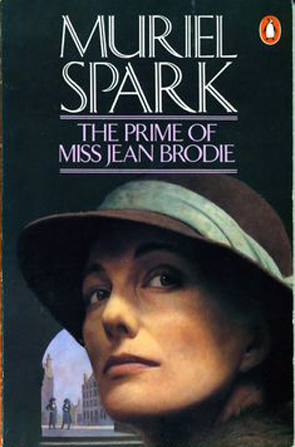 At first, The Prime of Miss Jean Brodie seems familiar enough. This is the story of a special teacher and the students she inspires, and because the book frequently foreshadows future events, it’s not long before you understand that Miss Brodie is in for a fall with the school bureaucracy, and it will be one of her own group of chosen pupils – the Brodie set as they are known in the school – who will betray her. To start with, the story appears to be following many Hollywood plots: Miss Brodie is the teacher who raises their students, who is inspirational and overcomes both their own and their students’ challenges, you might expect. Older films like Goodbye Mr Chips tell this story: the sentimental reminiscence of the career of a special teacher. To Sir With Love is a grittier version in this genre, chronicling a black teacher, played by Sydney Portier, who is tasked with educating poor white students. Then there is the uplifting Mr Holland’s Opus which even has an inspirational music piece to round off its hero. Of course, there is the darker variety to this common plot. Probably the most famous is Dead Poets Society, starring Robin Williams as John Keating, an old boy from the conservative Welton Academy who, like Jean Brodie, is betrayed by a student and is removed from the school for his unconventionality. If you begin to read The Prime of Miss Jean Brodie knowing little more than what I have outlined so far, you will probably begin reading it with Dead Poets Society as a template.

The Prime of Miss Jean Brodie is not Dead Poets Society, either.

The book follows the relationship of Jean Brodie with a group of her students beginning just before they enter senior school until they are grown and have begun their own lives. Parents are noticeably mostly absent in this story. Brodie draws her chosen set of girls to her like a protective hen, setting herself at odds with the establishment: the school curriculum or the principal, Miss Mackay. The time frame is roughly 1931 until 1939. Hitler is rising to prominence in Germany, the Fascists under Mussolini are in power and Brodie thinks that Mussolini and Hitler are wonderful, as are their fascist states. Her open expressions of support for the fascists are probably the first real alarm bell for the reader. Up until this point one might disregard Jean Brodie’s eccentric opinions and her manipulation of the students as unconventional, but if Jean Brodie has been betrayed and her career ruined – that’s what we are told from the start – then I think it only natural that, as readers, we wish to identify with her, find out what makes her tick and discover the scoundrel who overthrew a champion of individuality and creativity. After the war, when the horrors of Hitler’s Nazi regime have been revealed, Jean Brodie merely comments, Hitler was rather naughty. You come to realise there is a certain disconnect between Jean Brodie and reality.

And Brodie is unconventional. She leaves mathematical sums on the board, just in case the principal walks in while she regales her students with talk of her life, her lost love Hugh or her latest holiday. Or she makes them prop open textbooks and promise not to reveal that they are not following the curriculum and urges the girls to swot up later so that they pass their exams. What she offers, it seems, is an inflated belief in their own importance and the sense that empirical subjects like science and mathematics have no soul when compared to religion or literature. Give me a girl at an impressionable age, she boasts, and she is mine for life. It’s a claim that seems particularly true with Sandy, the girl the story mainly follows. As Sandy grows in her religious convictions she feels increasingly alienated from Jean Brodie whom she believes has elected herself to grace - an audacious arrogance of self-belief against the strict Calvinist doctrines that govern Sandy’s life as a nun – yet she still claims Jean Brodie as her greatest influence.

What sets this story apart from Dead Poets Society is that one is less and less inclined to view Jean Brodie as a victim of the school, even if she elicits some sympathy for a past and situation she clearly struggles to accept. We get the sense that the students have lost an inspirational teacher in John Keating. In Miss Jean Brodie, one increasingly witnesses a teacher who is manipulating, solipsistic and emotionally removed. She talks of her relationship with Hugh Carruthers with the girls when they are in junior high school. They are left to titivate over the possible sexual implications of Jean Brodie’s relationship with him, but Hugh was lost in World War I. Now, Brodie is left with a series of unconventional relationships, for the standards of the 1930s, which she not only increasingly discusses with her students, but in which she deliberately embroils them as proxies against her frustration. Brodie is only once referred to in the story as a feminist, and it is in connection with her choice to flout marriage and sexual conventions. I once worked with a teacher who held Jean Brodie up as an example of liberation, and I think this is what she was remembering. However, Muriel Spark never allows Jean Brodie’s choices to be anything other than a representation of her brokenness:

There were legions of her kind during the nineteen-thirties, women from the age of thirty and upward, who crowded their war-bereaved spinsterhood with voyages of discovery into new ideas and energetic practices in art or social welfare, education or religion.

The tone sounds condescending, since Jean Brodie, by this measure, is not liberated but has merely displaced her thwarted sexual energy. I can anticipate a feminist reading of this novel that sets Jean Brodie within her social and historical milieu as a study in attitudes to single women, or sexual expectations and social judgments limiting women during this period. The issue is apparent in Jean Brodie’s self-conscious meditation on her prime, a word used repeatedly by her and other characters to describe her. Naturally, it means someone who is in the prime of their life, intellectually and professionally, as most applies to Jean Brodie. But the word also refers to Jean Brodie as a woman in her sexual prime, and while there is no escaping Jean Brodie’s political views, the personal relationships she has with her students and the worrisome extent of her meddling in their lives would not only have a teacher sacked these days, but very likely jailed. And it is probably not what you think. There is much I haven’t discussed about the novel, and this is one aspect that needs to be kept back for anyone interested in reading it.

The story is not plot driven. Given Spark’s decision to reveal most of what happens early on – we even are given insights into the fates of each of the girls – our interest is really in a character portrait of Jean Brodie and her evolving relationships with her students. This is a well-controlled and well-written piece. The fascination in the story is in getting to know these characters and the gossipy revelations that appear throughout. There is a lot of layering of detail, so that what might be revealed at one point in time is returned to again, often with new information or perspectives on what we know. Like the girls in the story, our image of Jean Brodie slowly changes. This is a short, quick read, but it offers depths and thoughtful reflections about human nature and politics. Does Jean Brody deserve to be a feminist icon, or is she just embarrassing? Is she cultured or just ridiculous? Is this a simple story about a teacher or does it represent larger concerns about the failure of western civilisation in the 1930s. There is no one way to read this story, but it certainly is worth reading.

When I see Miss Mackay on Monday morning, said Miss Brodie, I shall point out that by the terms of my employment my methods cannot be condemned unless they can be proved to be in any part improper or subversive, and so long as the girls are in the least equipped for the end-of-term examination. I trust you girls to work hard and try and scrape through, even if you learn up the stuff and forget it next day. As for impropriety, it could never be imputed to me except by some gross distortion on the part of a traitor. I do not think ever to be betrayed. Miss Mackay is younger than I am and higher salaried. That is by accident. The best qualifications available at the University in my time were inferior to those open to Miss Mackay. That is why she holds the senior position. But her reasoning power is deficient, and so I have no fears for Monday.