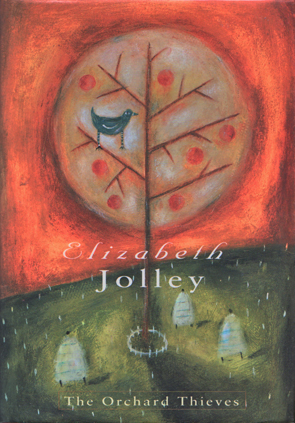 Elizabeth Jolley wrote The Orchard Thieves during her early seventies. She began her literary career late, not having published a book until she was fifty-three. The Orchard Thieves tells its story from the perspective of a grandmother. She is never named. In fact, no character is named. Instead, each is given their family title. The grandmother is mother to three daughters. The eldest, most commonly referred to as the aunt, is a school teacher and unmarried. The youngest daughter is married with two sons. The middle daughter has been in England for some time and now sends word that she intends to return home. Her relationships and circumstances are a mystery to the grandmother.

It is tempting to speculate to what extent Jolley’s own life informs this novel. Written from the grandmother’s perspective, it seems natural that Jolley, writing in her seventies, adopts her as protagonist. But Jolley’s personal circumstances are also intriguingly hinted at in the character of the middle daughter. As a young nurse in England, she had an affair with one of her patients, Leonard Jolley, and became pregnant. Leonard’s wife was also pregnant at the time. Elizabeth Jolley immigrated to Australia with Leonard Jolley and for years wrote letters to his relatives in England, pretending to be his former wife. So, there is a hint of old-fashioned scandal and family pain that colours Jolley’s life.

The grandmother is a recognisable character. She frets about the prospects of her daughters and struggles to relate to her wild grandsons. They tear through the supermarket, each with a trolley, like motorcar racers, and describe most things – things of beauty the grandmother would like them to appreciate – as crap. Nevertheless, she obsessively worries they might be injured or suffer setbacks in life. Her eldest daughter, the aunt, manages to conduct a positive relationship with the boys, but the grandmother worries about her too. She has taken to walking alone and the grandmother wonders whether it is to meet a man. Will he fail to turn up and disappoint her, or become a part of her life and hurt her? And then there is the middle daughter. The grandmother obsesses over maps from England, wondering about her daughter’s life there. The maps are both a window on that world and remind her how closed it is to her; how closed her daughter’s life is to her. Vast sections of the map are open to her gaze, yet at the same time she knows they represent private property; forbidden places. When her daughter finally arrives from England, the pregnancy she attempts to hide is obvious, and the grandmother’s concerns for her circumstances – is she escaping abuse, blackmail, etcetera – is exacerbated when she discovers the daughter has been having a lesbian relationship.

At its heart, The Orchard Thieves is a meditation upon the private pain of families. The grandmother yearns for certainty and harmony, but her thinking is of a biblical mindset that expects suffering and tribulation. The book’s title refers to a line from the first chapter of Moby Dick: The act of paying is perhaps the most uncomfortable infliction that the two orchard thieves entailed upon us. Ismael reasons that it is better to be paid to sail the seas than pay as passengers must. But the orchard thieves he speaks of are Adam and Eve, cast from paradise for their disobedience to God. Their eating of the fruit of the Tree of Knowledge is the Original Sin, entailing the Fall of humanity with its stain. Suffering is humanity’s payment to God for Original Sin.

Divided into three sections, each headed with an epigraph, Jolley’s book is a consciously literary creation. The second epigraph makes the connection of the book title with Genesis clear. The third epigraph cites two verses from Corinthians (4.17 and 4.18) which suggest earthly suffering is a small thing compared to the eternal glory of the afterlife. The first epigraph is an extract from Thomas Traherne’s ‘The Salutation’, which meditates on the mystery of life and the essence of the eternal self. Cumulatively they evoke the grandmother’s mindset and her preoccupations: her difficulties relating to her grandsons, her sense that there is a price of suffering to be paid in life, but a mitigating belief that there is hope.

The novel also appears loosely based on Shakespeare’s King Lear. The aunt, like the devoted Cordelia, refuses to be an accomplice in her sisters’ scheme to make the grandmother sell her home and divide her wealth. The metaphor of orchard thieves becomes extended. From Adam and Eve, their sin is echoed in the scheme of the two youngest sisters, who wish to force out their mother from her house and orchard. And the youngest generation, represented by the two grandsons, repeat the sin in their childish enthusiasms. Their voices are associated with the birds that eat the fruit from the orchard trees in the grandmother’s mind, and they not only take fruit from the trees, but sneak fruit from plates set out for guests. Fearful for their future, the Grandmother reflects, She did not want her own small orchard thieves to bear for the rest of their lives the penalty, the endless act of paying, this legacy from the original Orchard Thieves, for ever.

Jolley’s characters, particularly the grandmother, dramatize the human struggle between our natures and our intentions. Whether the circumstances of our lives are bound to overwhelm us, or through our actions and our will, we can overcome suffering and achieve harmony, is a central theme in this novel. Whether sin is an atavistic reality embodied in our children; or whether the difficulties and needs of each individual can be managed, or are bound to destroy collective harmony. Whatever reality we find, The Orchard Thieves shows that life is to be endured, patiently or with great pain. It is a very private, personal insight into insecurity, fear and love. It is a simple narrative with unexpected depths, and well worth a look when you’re in a mood to contemplate the vagaries of life. 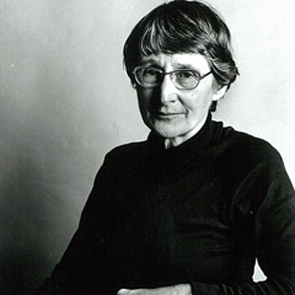 The previous year the nephews had eaten the aunt’s birthday chocolates; to be more accurate they had each picked out the ones they liked, leaving a ravaged box of chocolate papers, nuts and hard centres. This year, the aunt not wanting her birthday even mentioned, let alone celebrated, there were no chocolates. Of course the grandmother remembered it was the aunt’s birthday and clearly she was waiting out the day there along the river bank. There were people who did things like that. They endured. They endured something alone and in silence till it passed.