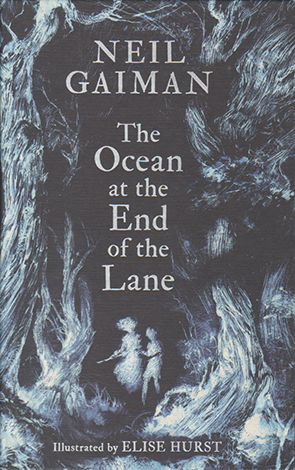 Winner of the Specsavers National Book Awards 2013, Book of the Year

The Ocean at the End of the Lane
Neil Gaiman
Illustrator:Elise Hurst
Toriaz

Nobody looks like what they really are on the inside. You don’t. I don’t. People are much more complicated than that. It’s true of everybody.

Lettie Hempstock to the boy, The Ocean at the end of the Lane

This is a very simple but also very strange, almost surreal, book. It’s like a fairy story, almost. A man returns to his home town for a funeral and visits a farm at the end of the lane he lived in as a child. His visit prompts memories from his childhood forty years earlier, when he was seven. He is taken back to when an opal miner stole his father’s car and killed himself in it outside the farm. That action unleashed a supernatural monster into the world.

The monster uses the boy to travel to our world and establish a base of power. He and the three women who live on that farm at the end of the lane – Lettie Hempstock, her mother Ginnie Hempstock and her grandmother, old Mrs Hempstock – are the only people who can see the monster for what it really is. The rest of the world sees the monster as a lovely young woman who has come to the boy’s house to look after him and his sister while his parents work. That’s where the story comes from – the boy knowing what it is that is living in his house, while Ursula (the monster) knows that he knows and delights in her power over him: none of the adults will ever believe the truth, even if the boy could ever bring himself to tell them about it.

Gaiman has created a fantastical world, where the real is blended with the magical. This book is a weird balance between nostalgia, with some of the pleasures of the childhood, and sheer terror for the boy caught in a traumatic time, as he finds himself alone at the mercy of this creature who can control him.

This is not a long book. The page count for my edition is misleading. The illustrations and the well-spaced text roughly double the page count from the original editions. It is a very quick read. I got sucked into reading it and before I knew it, another 60 pages had passed through my fingers.

Although the main character is a boy and the story is a fairly simple one, I don’t think this is a book aimed at children. I think it’s a book that you need to be an adult to appreciate, and preferably, a fairly old adult who can understand how memories from events in your childhood can fade away, even if at the time they may have seemed something you could never forget. The adult narrating his memories is fully aware that he is looking back at his childhood, and sometimes comments with an adult’s understanding on some of the things that happen. The effect is that the reader is kept at a slight distance from the story. You know that the boy will survive the traumatic events, but you also know that he has not escaped unscathed from his experiences. We learn at the end that he has actually returned to the farmhouse several times over the years, but he doesn’t remember any of these visits. And as he leaves the farm to return to his family, his memory again starts to fade, leaving us to wonder if, this time, he will retain some link to his extraordinary tale in his adult world.

A word on my edition. I saw a regular paperback edition of this book in my local bookstore, it sounded interesting so I decided to buy it. Then I spotted my edition, a cloth bound hardback with lovely illustrations for only a few dollars more than the paperback. I had no idea at the time that it was a special edition. I was just happy to have found a lovely book. But now that I’ve read it, I am even happier with my choice. The illustrations are almost abstract representations of the story. They are dark and moody, and I think they capture the magical feel of this book perfectly. If anyone is looking to buy a copy of this book, I would recommend searching for this beautiful edition. 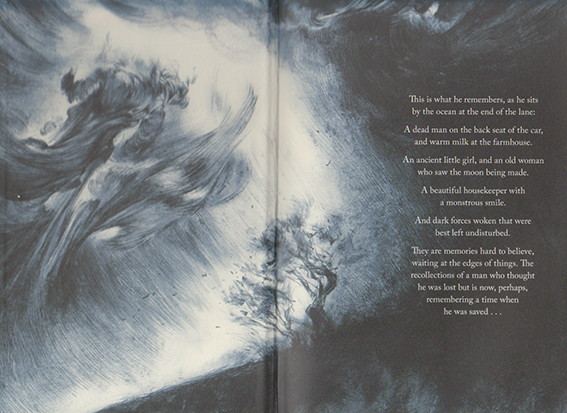 The endpaper from this edition is a good example not only of the haunting atmosphere created by Elise Hurst's illustrations, but the way the illustrations integrate with and complement Gaiman's writing.
Widget is loading comments... 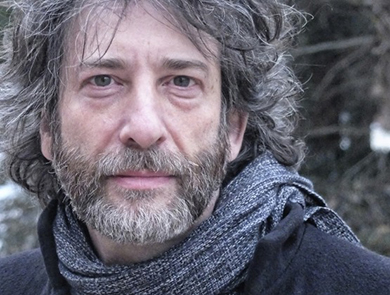 Neil Gaiman
Neil Gaiman is a highly successful English writer, known for works like American Gods, which has been adapted for television, and for his collaboration with Terry Pratchett on the novel, Good Omens. He has been successful as both an adult and a children's author. You can visit Neil Gaiman's website by clicking here. 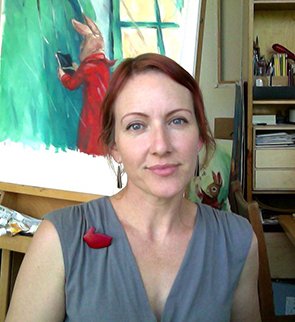 Elise Hurst
According to her website, “Elise Hurst is a Melbourne-based illustrator, fine artist and author, specialising in children's books. She works in a vintage alternate reality, creating characters we feel we know and worlds we would like to inhabit.” You can visit Elise Hurst's website by clicking here.

Elise Hurst's haunting illustrations are an integral part of this edition of the novel, and are integrated seamlesly with the text. Thet are evocative and add offer another avenue of interpretation, making this edition a choice of preference. 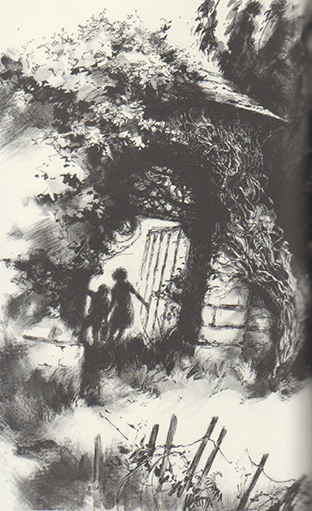 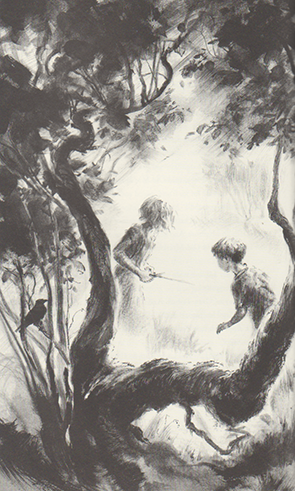