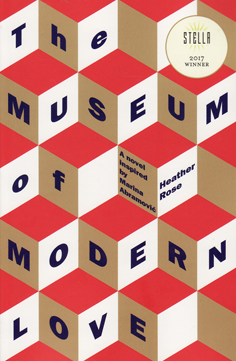 The Museum of Modern Love is based upon a real artist, Marina Abramović, and her exhibition at the Museum of Modern Art in New York in 2010. Abramović is a performance artist and her exhibition, ‘The Artist is Present’, took place over the course of 75 days from the 9 March to the 31 May. During that time over 850,000 people visited the exhibition while 1554 people participated. Abramović sat at a table each day, almost totally still, her head bowed, until someone came to sit opposite. She would then raise her head and gaze into their eyes. The person opposite did likewise, and they sat for as long as the participant chose. When they chose to leave, they simply bowed their heads and then stood. Abramović would then bow her head until the next person chose to sit with her. Abramović sat for each day of the exhibition without a break, never speaking.

Heather Rose gained permission from Abramović and those close to her to write her novel, with complete artistic freedom granted. As a result, Rose attributes thoughts and feelings to her real characters as freely as she does her fictional characters who become obsessed with the exhibition. Her main fictional protagonist is Arky Levin, a film composer who is facing a personal crisis. His wife, Lydia, has been institutionalised after a stroke with a formal court document stating he is not to visit her. Only his daughter, Alice, with whom his relationship is strained, sees Lydia. Levin’s feelings meander between a sense of loss, bereavement and purposelessness without Lydia in his life, to a more selfish relief that he does not have the burden of looking after Lydia, or that she might interfere with his creative endeavours. Levin becomes transfixed by Abramović’s performance over the 75 days that she sits, and makes contact with others, like Jane Miller, who are equally moved. As Jane watches Abramović her mind wanders, as those who watch the performance find their minds doing, to other significant moments in her life. In Jane’s case it is the memory of her recent loss of Karl, her husband.

The novel follows other characters, too: Tom Washington, with whom Levin had a creative collaboration in film, and Healayas Breen, his exquisite girlfriend, whom Levin desires; Brittika, a PhD student from Amsterdam, abused as a child, who feels inspired by Abramović’s creative life; and Arnold Keeble, the ambitious and cynical television critic who is drawn to Abramović, despite himself. Each character is grounded in their own story and makes their own sense of Abramović’s exhibition to their own lives. Of course, there are the voices at the exhibition who deride Abramović’s work (You put anything in a frame, call it art, get enough publicity, and people will think it has to be important; Is it a staring competition?) But for the characters of Rose’s novel, central to their stories is the question of the purpose of art and the sense of the significance of Abramović’s torturous sitting to their own lives. Abramović is both oracle and blanks canvas, terrifying and comforting to the protagonists who sit with her. Each receives moments of insight. Each is changed by what they encounter after they face her.

But Rose hasn’t just anticipated the potential of personal revelation in The Musem of Modern Love, but contextualises the exhibition through historical event: Yugoslavia’s struggle against the Nazis, the War on Terror and the felling of the World Trade Centre in 2001. The world’s problems are antipathetic to the insights found in the artist’s presence, that moment of convergence anticipated by the novel’s narrator – a muse, inspiration or art, itself. There is a funny moment in the novel in which one exhibition attendee who has flown to New York specifically for the exhibition says his impression of New York is one of calm and peace, since he has been nowhere else in the city.

The novel raises the question of the possibility of secular spiritualism. Abramović’s torturous sitting naturally calls to mind religious asceticism and the denial of the physical body for spiritual insight. The novel’s disembodied narrator focuses on the scientific breakdown of the constituent parts of the human body – so much oxygen and water and other elements – and Levin’s daughter, Alice, a medical student, has seen the reduction of the human cadaver to its component parts. But the novel does not dismiss spirituality, even if Abramović acknowledges the problem of accepting a traditional view of God. The insights gained by Abramović’s participants seem beyond mere reflection in quiet moments, although the efficacy of this in a busy world is also advocated. Abramović speaks to them through her silence and the example of her life.

The characters are complex and the issues the novel raises are impossible to fully discuss in a review like this. In the end, one has a sense that while we might eschew the presence of God, humanity is more than its constituent parts. That history, culture, family, sexuality, relationships and creativity are all part of the convergence of stories and connections to be made in life. But there is so much more to be gained from reading the novel, itself, since reading it, I suspect, is something like sitting in front of Abramović. Different people will take away different insights from their reading.

I have included a YouTube video below of the moment when Ulay, Marina Abramović's former husband and artistic collaborator, visits her during 'The Artist is Present'. Watch it to the end to see the powerful impact Abramović's 'performance' could have. Ulay is one of several real people close to Abramović to appear in the book, along with New York celebrities like Robert DeNiro, Alan Rickman and James Franco, who attended the exhibition and add to the flavour and a sense of occasion in the novel.

Marina Abramović - The Artist is Present
Widget is loading comments...

The Artist is Present 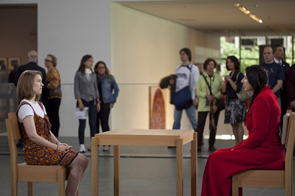