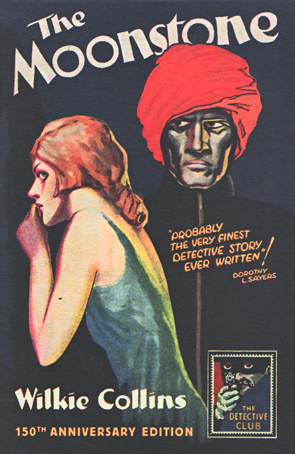 The Moonstone was published in 1868 and is considered one of the earliest detective novels (Poe published Murders in the Rue Morgue in 1841, which introduced the idea of the locked-room mystery, but that was a short story). The mystery in The Moonstone is not set around a murder case, as much modern crime fiction is, but the disappearance of a valuable diamond, the Moonstone.

The Moonstone has many elements that would become the staple of crime fiction during the Golden Age of crime in the 1920s and 30s, and beyond. Naturally, a detective is called when the Moonstone goes missing the night of Rachel Verinder’s birthday dinner at the country home of her mother, Lady Verinder. There is a host of likely suspects, including a servant with a criminal past, Rosanna Spearman, along with professional men like Dr Candy, Rachel’s cousin and suitor, Franklin Blake, along with traveller and adventurer, Mr Murthwaite, as well as socialite philanthropist (also cousin and suitor to Rachel), Godfrey Ablewhite. But Collins’s plot is also layered by the history of the Moonstone. Hanging about the village are three Indians posing as jugglers, who seem intent on stealing the Moonstone. They are described as “three guardian priests” in the prologue; the latest generation of the stone’s protectors, sworn to retrieve it and return it to India, where its value lies in its spiritual, rather than its financial worth. This kind of character is common in modern films like the Indiana Jones moviesor the Mummy films starring Brendan Fraser. Stalked and attacked by guardians of an ancient artefact, our heroes often find they are actually fighting for the same objective. The revelations in the plot also encourage us to read the book like a conventional modern detective crime thriller. There is the bungling detective, Superintendent Seegrave, soon replaced by the more formidable Sargent Cuff, who comes with a recommendation and a reputation of competence. There are the interviews of witnesses and suspects, false leads, mysterious conclusions that make you wonder what you have missed, as well as twists in the plot. Although Collins’s detective story is somewhat different from later crime novels: Not only is Seegrave replaced by Cuff, but Cuff himself bows out of the investigation after having made some predictions to Gabriel Betteredge, the Verinder’s head servant. Later, the job of solving the mystery will fall to Mr Murthwaite, as he delves into the events of the night and the unlikely scenario that led to the disappearance of the Moonstone.

One of the peculiarities of the novel is that it is told from the point of view of several people, some of whom might be considered suspects. Gabriel Betteredge is asked to put down in writing his recollections of the events around the disappearance of the Moonstone and Sargent Cuff’s efforts to solve the mystery by Franklin Blake, two years after the diamond’s disappearance. Betteredge’s narrative extends to almost half the novel, and the narrative is then taken up by other hands who have new perspectives to add. This is a strange decision for a crime novelist, as each narrative either exonerates the character from suspicion, or leaves us with the opposite: that any narrative is potentially lying to us. If this were the case, Collins would be transgressing the rules of detective fiction, but they would not be formalised until another 60 years after this book was published. Besides, Collins solution to the missing diamond is not so prosaic.

Of note in this collection of narrative voices is the sanctimonious Drusilla Clack, niece to the late John Verinder, Rachel’s father, whose account offers little to the narrative, except to document the attack of the Sir Godfrey Ablewhite by the Indians in London, and to introduce us to a minor but important character, Mr Luker, who is thought to now be in possession of the diamond. But more memorable is Drusilla’s decision to leave books of Christian instruction – a whole dozen of them – all about her aunt’s house. Drusilla is moralising and aggressive in her proselytising, and is shocked when her books are returned the next day. She is possibly one of the most reprehensible characters in the novel. But her actions, at least on this personal scale, represent the imperialistic impetus of England in India. After all, the history of the diamond is also a history of the British Raj, and attempts not just at commercial and militaristic hegemony in India, but cultural as well. And after the Sepoy Rebellion of 1857, only twelve years before the publication of The Moonstone, any English person reading the novel would be hard pressed to dismiss that event from their minds.

This is where I would like to digress to talk about my personal reading of the novel. The relevance will be made clear shortly. I bought a hardcover edition with a pulp fiction cover which features in this review. It is published under the aegis of the Collins Crime Club (Collins the publisher, not Wilkie Collins). The Collins Crime Club was an imprint that ran from 1930 to 1994. The Moonstone was first published by Collins in 1931 and the introduction by George Douglas Howard Cole and his wife, Margaret Cole, was added in 1953, just six years after Indian Independence (My edition is a 150th anniversary edition published in 2018). What is curious about my edition – and I only found this out after ‘finishing’ the novel while I was reading about its historical context – is that my edition omits the Epilogue. The Epilogue rounds out the story of the Moonstone and its eventual fate. Told from the point of view of Mr Murthwaite, the last part of the Epilogue is a more sympathetic treatment of the Indian guardians. They are more like Frodo forced to leave Middle-Earth, having helped restore his world: having forfeited their caste in order to seek the Moonstone, they are now sent on their different ways, forever to travel alone. This ending returns the reader to the historical context of the Moonstone, first introduced in the Prologue. Given that the novel’s story is told from the personal perspective of several different characters, the representation of the Indians is often negative, even somewhat racist, before this. Betteredge focuses on the exotic when describing the Indians – their “hocus pocus” – and a strange ritual he describes as they try to divine the whereabouts of the Moonstone. Others focus on the ‘otherness’ of the Indians: their looks. They are almost always attributed with malicious intent.

Without the Epilogue, the focus at the end of the story resides firmly with the happiness of the story’s English protagonists and the restoration of order in their lives. The story, truncated as my edition is at Betteredge’s return as narrator, quietly forgets the true injustice implicit in Wilkie Collins’s Prologue: that the diamond has a history before its time in England, imbued with cultural and spiritual significance to its Indian owners. This was a thought that niggled at me as I ‘finished’ the novel, and as I wondered about what I assumed was Collins’s problematic ending. When I discovered that the Epilogue had been left from my edition, I wondered at the editorial choice of the publishers of the Collins Crime Club, whether Cole and his wife had anything to do with it (I can’t discover anything about them that would illuminate this question), and given the timing of their introduction, whether Indian Independence 6 years prior to the 1953 edition had anything to do with it, or whether the decision had already been made in 1931.

As the novel stands, complete, it is interesting that it is originally published in 1868. The novel is an implicit criticism of English imperialism and the entitled ideology that England was improving India by introducing its own culture. Collins, no doubt, intended that readers should cringe at this entitlement and virtue in much the same way as we should cringe at Drusilla Clack. (Collins has been called an “atheist” and “irreligious”, but there is no definitive position about Collins’s religious beliefs). Having immersed themselves in the problems of their English protagonists to regain the Moonstone, Collins’s choice of ending would have been somewhat unexpected by his contemporary audience.

Having said all this, I should conclude by saying that we can accept some of what T.S. Eliot said about The Moonstone: that it was “the first, the longest, and the best of modern English detective novels in a genre invented by Collins and not by Poe.” It may nominally be the first, at least a precursor to modern detective fiction, and certainly trumps Poe as a novel to Poe’s short story. But the best? The Moonstone has its flaws, some of which are difficult to discuss without spoilers, and I have tried to avoid spoilers here. Aficionados of modern detective fiction might appreciate the importance of Collins’ book, but they might be disappointed at the – let me be frank – truly strange method of solving the mystery. Or that the nature of the mystery does not allow a reader to rationally attempt to work out the solution for themselves. Or that love stories in the novel are integral to the plot, and especially important for the denouement of the English story, at least. But The Moonstone is as readable and engrossing as any modern detective story, nevertheless, and is sure to entertain modern readers, whatever its minor flaws might be deemed to be.

This trailer for this 2016 television mini-series based on The Moonstoneheavily emphasises the romantic elements of the story.
Widget is loading comments... 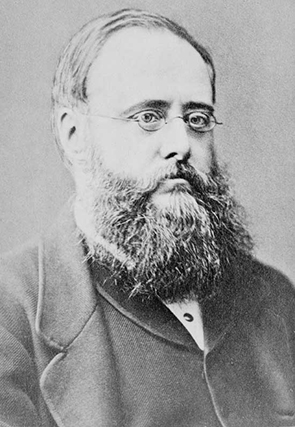 Wilkie Collins
Wilkie Collins was a contemporary and close friend to Charles Dickens. He was also an opium addict which increasingly affected his writing as his career progressed. The influence of this addiction will be evident to anyone who has read The Moonstone.

Inspirations for the Moonstone

The Moonstone is a fictional diamond, but Wilkie Collins states in his 1868 Preface that he based his Moonstone on two famous diamonds: “The magnificent stone which adorns the top of the Russian Imperial Sceptre was once the eye of an Indian idol. The famous Koh-i-Noor is also supposed to have been one of the sacred gems of India…” 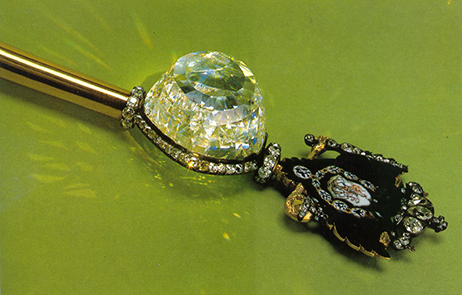 The Orlov
Also known as "The Great Mughal Diamond", the Orlov is a large diamond of Indian origin. It is displayed here in the Imperial Sceptre of the Russian Empress, Catherine the Great. 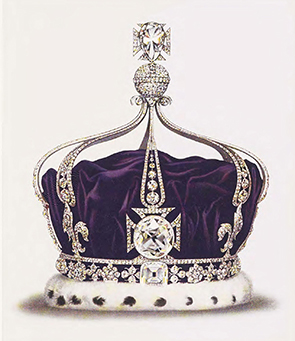 The Koh-i-Noor
The Koh-i-Noor has the longest recorded provenance of any diamond. In the 19th century it became a symbol of potency when the British sought it as a sign of imperial domination. They eventually acquired it in 1849, after the Punjabi throne fell to a young boy, Jindan, ten years old, at the end of the 1848-49 Anglo-Sikh War. The British forced Duleep to amend the Treaty of Lahore, that required Duleep to give away the Koh-i-Noor and all claim to sovereignty. It was displayed at the Great Exposition in London in 1851 and was recut to fit Queen Victoria’s crown. It is difficult to separate this historical context from Collins's story, especially since he foregrounded the diamond in his original Preface.