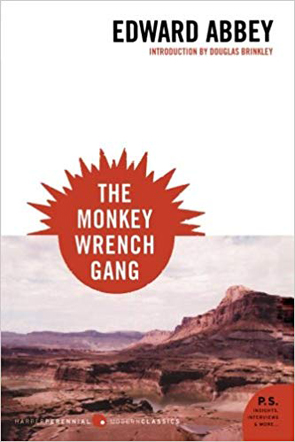 It's October of last year and my best friend and I are driving a town over to go to the used book sale that the library hosts three times a year, our coffee's sloshing inside their Styrofoam cups as I take a turn too aggressively, focused too much on telling a story from yesteryear instead of safely maneuvering my vehicle around the lazy bends of the suburbs. We make it safely to the parking lot, grab our bags and coffees, and head into the library.

Sale in the basement, as always. 10,000+ books/dvds/cds/assorted trash. To properly sift through everything would take the whole day; we will give a modest scan to everything in about two hours’ time. I sweep the paperback section and find the first book, top shelf, upper left corner waiting for me: The Monkey Wrench Gang by Edward Abbey. Having read Abbey's Desert Solitaire a few months prior and loving it intensely, I immediately grab the book. After a few hours my friend and I depart the sale, our bags heavy with books of all shapes, sizes and genres. There's a certain layer of filth covering us now; a dusty, gritty feeling in our bones from pawing over too many used books, but it's a feeling we've grown accustomed to, grown to appreciate and understand as part of the custom of the used book sale. You can find anything your heart desires if you are willing to get a little dirty and spend the time on it.

We head to a diner for breakfast food, too many donuts, unlimited refills on our coffee, and conversation covering topics near and far, from our college hijinks to the latest complaints about the corporate world. The conversation will ultimately steer to the same direction it always does these days; our fear of what's happening to the climate, and how powerless we feel to do anything about it. A poisoned question with no antidote, the conversation eventually quiets and starts back up again about something else. Neither of us know how to stop the bleeding of our planet.

A few months later, I'd finally open the book.

The Monkey Wrench Gang follows the exploits of four individuals in the desert who, believing that the government and corporations are only interested in destroying the Earth and all the beauty she holds, decide to return the favor by destroying heavy machinery used to build roads and dams, log forests, and otherwise ruin the planet in the name of recreation, commerce, and any other activity serving capital. The book, written in 1975 is probably more important today than when it was originally penned. Is it still a radical idea to rip apart and sabotage machinery that is otherwise destroying our irreplaceable life systems? God, I hope not.

George Washington Hayduke is a former Green Beret who served in Vietnam. He definitely has some sort of PTSD, and our introduction to the character involves him stealing a police car and parking it on active train tracks, narrowly escaping as an oncoming train plows into it, followed by him urinating off a bridge into the Colorado River. He should be no one's hero, and yet his unrelenting drive to destroy anything and everything that is harming the environment is endearing. He's a lunatic, but he's our lunatic. He isn't the leader of the Monkey Wrench Gang, but he isn't not the leader, either. But I'm jumping ahead a bit.

Doc Sarvis is a surgeon with a penchant for burning and cutting down billboards, his part-time girlfriend and secretary, Bonnie Abbzug originally from Brooklyn and now transplanted to the American South West is, by her own admission, bored. They need something else in life, at least Abbzug does. Doc just seems to need Abbzug. They decide to go on a rafting tour with a local guide.

Seldom Seen Smith, a river runner and guide, is a Jack Mormon with multiple wives. He winds up providing a tour for, amongst other guests, one Dr. Sarvis and Ms. B. Abbzug, and needing an extra hand to help with the trip, hires a drunken and ill-prepared Hayduke to assist. The rafting tour goes mostly as planned, with the Doctor, Smith and Hayduke drinking around a campfire, lamenting the slow, tortured death of the planet in the name of prosperity. They come to a half-baked plan to destroy the machines that do the bidding of men.

And so, the Monkey Wrench Gang is formed.

Medium speed car chases across desert terrain, impossible climbs and descents of cliff faces, explosions, sex, drugs, heart ache and sacrifice, The Monkey Wrench Gang is everything you want in a pulpy book that would go on to inspire the radical environmental activist (some would call it ‘eco-terrorist’) movement in the United States. ‘Monkeywrench’ has itself become a term meaning to sabotage anything that infringes on wild spaces or the environment. The Earth First! group was inspired by the book, and actually did participate in ecological sabotage in the real world. Abbey was a mythical figure, the Western equivalent of Thoreau, and young people were getting a new taste of anti-capitalistic ideas mixed with love for the beauty of nature from his work.

The Monkey Wrench Gang is Abbey's best work of fiction, and stands shoulder to shoulder with his aforementioned Desert Solitaire. The writing of Abbey really stands out, he has a funny and witty voice that spans different types of humor seamlessly. Over the top wacky jokes, dark cynical humor, or lowbrow toilet gags, Abbey combines it all with his knowledge of flora and fauna of the West to be both inspiring with vivid description and belly-laughing with crudeness or sarcasm. It's the type of duality in voice from someone who is truly at home in the outdoors; appreciating the beauty of the world and making a fart joke that sounds hilarious from exhaustion and sleep-deprivation.

Abbey's prose does not slow down for the reader, jumping through points in time with a minimal use of exposition, but more than enough description via the characters to keep us in the loop of what's going on. One chapter, Duologues, contains several pages of conversation between characters with little or no tags at the end of the quote to explicitly state who is speaking. The characterization in each character is so strong that the tags simply aren't needed. You know it's Hayduke grunting and chugging beers, and you know it's Doc mentioning the slightly incorrect Latin name for a plant.

The writing is so well-defined and sparse, it's a balancing act navigated by an expert technician of words: not a masterpiece of fiction, but a novel containing exactly what it needs to; a few dumb jokes, fewer smart ones, and a call to arms to stop destroying the only home we have. We might not have listened right away, but we're starting to get it together, Mr. Abbey.

I might not know the best way forward but I know that a wrench might be enough to get started. Down with all kings but king Ludd. 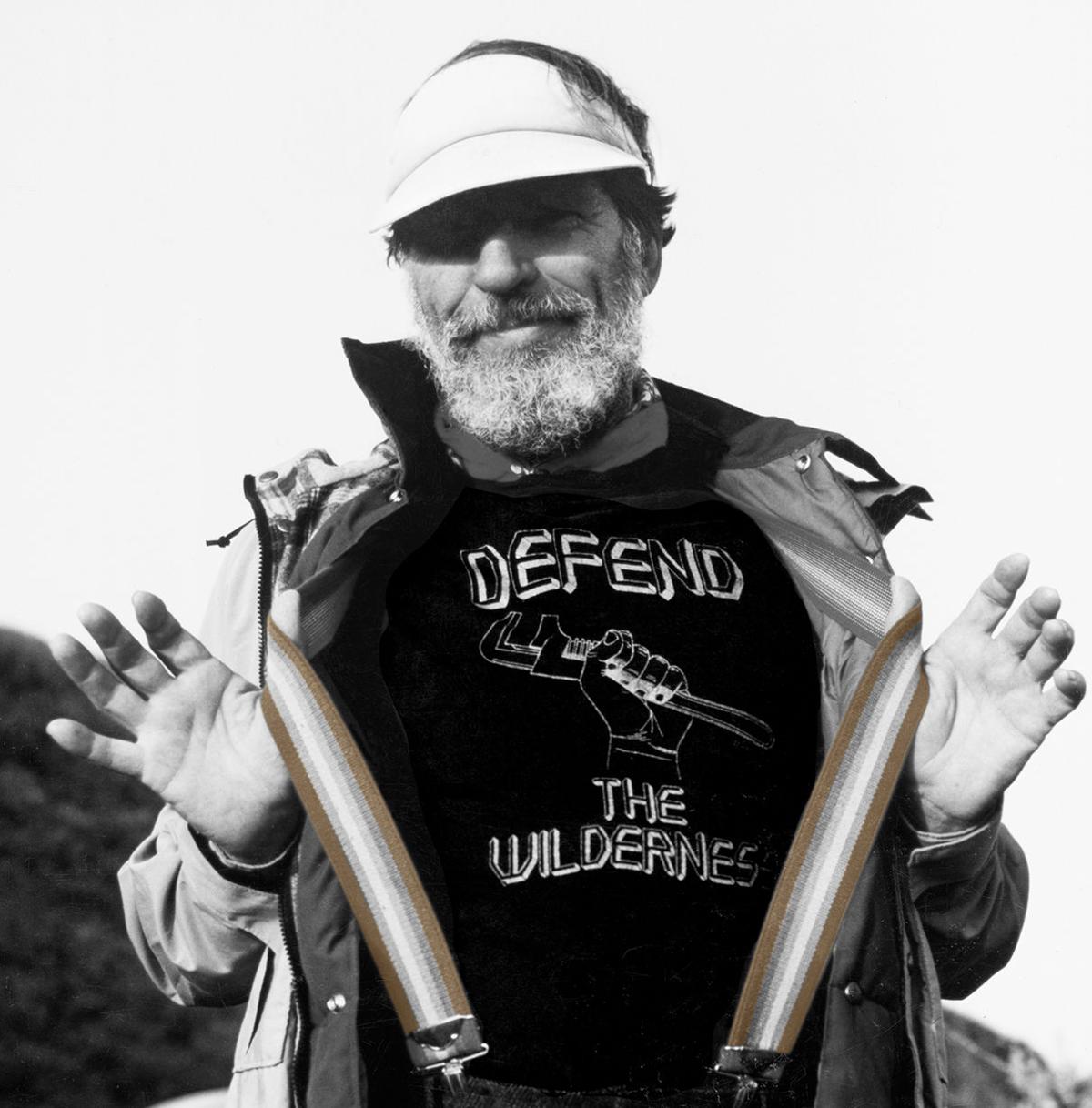 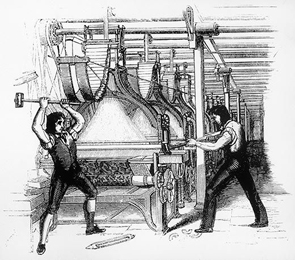 Ludites
The term Luddite has come to mean a person opposed to new technologies or ways of working. In the early 19th century, Luddites were known to smash industrial machinery, particularly cotton and woollen mills, as a resistance to new industrial practices that threatened traditional jobs. This kind of activism has also inspired environmental activists, as portrayed in The Monkey Wrench Gang. 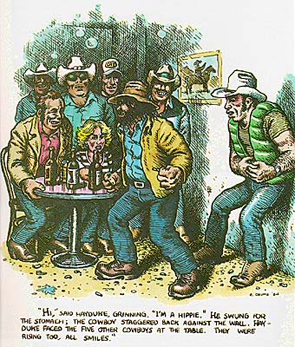 The Dream Garden Press Edition of The Monkey Wrench Gang (1985) featured illustrations by Robert Crumb which depicted scenes from the book. The edition was a huge success, but a calendar featuring the illustrations the following year did not do well. 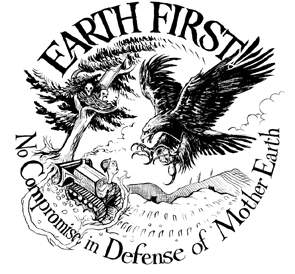 Earth First
Earth First is an environmental group formed in the late 1970s. It took its inspiration from books like Rachel Carson's Silent Spring and Edward Abbey's The Monkey Wrench Gang. It aimed to set aside vast ecological reserves around America.